Just One of Those Flings

It's been ten years since Sarah beat the Labyrinth and left the King and the Underground. She's single and visiting the Crescent City for the first time with her best friend. Little does she know her former rival is also in town with company. As you can imagine, the results are interesting.
Rated M for sexual content; fluff, some angst, and some humor. Jareth/Sarah/Several OCs.

Chapter 1: What are Friends For? 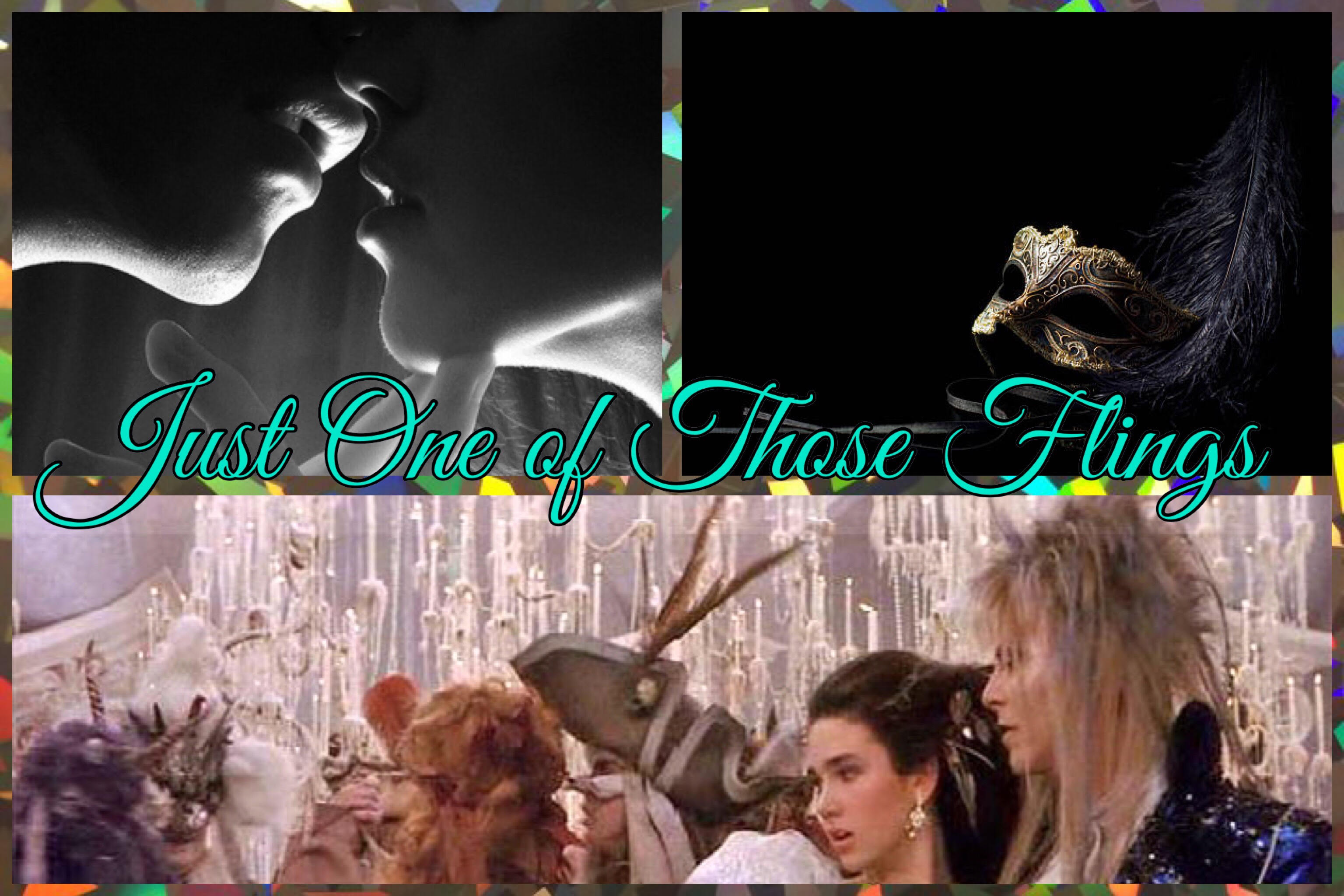 Jareth grit his teeth and barely resisted the urge to roll his eyes as he shifted his gaze across the banquet table towards his friend. He took a sip of wine just to drag out the annoyance building on Niall’s face, faintly snorting into his cup when the man rolled his eyes. Barely masking a smirk in response to the nobleman’s gesture for him to expand on his denial, he simply shrugged a shoulder and looked boredly around the room, eager to change the subject.

“You’re serious…you’re really not going to go…” Niall blinked, leaning back in his own chair and ignoring the other nobles on either side of him as the high court dinner continued on around them. Jareth did the same, not that the others around them seemed to care. Most refused to associate with the Goblin King, considering him too low a court or too wild for their tastes. If Niall hadn’t known him most of his life, he doubted they’d still be steadfast friends, especially after the last decade and that particular rumor got out.

“Quite serious,” he replied tightly as his mind cruelly relived memories from his past just to torment him. His eyes briefly flickered around the room, almost idly wondering if anyone could pick up on his self-loathing. He’d long since made a fine art of schooling his expression, but the needling sensation that someone could somehow peel back his crafted mask and laugh at his insecurities never left him.

There wasn’t much that floated around the high court, only that he had been beaten by a mortal female many years ago. It had been known to happen, albeit rarely, hardly something most of the nobles would have concerned themselves with for long. Still, for him, it was an ever-present chain around his neck, mocking him and chafing in such a way to make his skin prickle with a mixture of shame and barely suppressed rage. It wasn’t so much what they thought of him, he never had cared that much, but when he would remember what he’d offered her – no, pleaded to her – in those last private moments and she’d rejected him so decisively he felt utterly mortified. She didn’t want me? How could she not want me! I am a KING!

Niall frowned, sipping at his wine, narrowing his gaze at Jareth as he did so, as if he almost was able to pick up on Jareth’s thoughts. He immediately dropped the self-flagellation and stared at his friend with a schooled bland expression.

Still, Niall pressed the issue, making Jareth want to strangle him. Niall, the clever bastard, must have known this with the small cheshire grin he gave in return to Jareth’s muttered oath. “You haven’t gone Aboveground in years, Jareth. There hasn’t been a summoning in a long time, so it wouldn’t interfere with your duties. I am sure your other subjects can keep beings as simple as goblins amused for a few hours.”

Jareth shook his head, sipping at his wineglass once again. “Perhaps, but I must pass all the same. I am overseeing the rebuilding of the northern border. It needs my attention.”

“Poppycock,” Niall snapped. He jabbed a finger in Jareth’s direction. “You’re simply being stubborn at this point. There is nothing so dire in the Goblin Kingdom that you cannot entertain an old friend Aboveground for a few hours.”

When Jareth didn’t budge, simply sipping his wine and looking unconvinced, he tried another tactic, grinning and tilting his head to the side. “Oh come on my friend, it’s been decades since we’ve gone. It’s only a few days away! This was always the perfect time to go Aboveground and have a little fun. Surely you remember what that is, yes? We’ll be in costume, no one will even notice – and if they do? We adjust their memories.” Niall shrugged a shoulder, watching Jareth snort into his cup once more. He stared back, flashing his friend another toothy smile. “Besides, if anyone needs to relieve some tension, it’s you.”

Niall smirked and pinned him with a knowing look. “You know exactly what it means, my friend.”

That rankled him, even if it was true. If it weren’t for years of friendship, Jareth would have taken keen pleasure in reaching across the table and slamming Niall’s handsome face into the table. He’d already done it to others, several times, which was why despite the snubbing at the high court functions, no one dared challenge his rule of the Goblin Kingdom. Glowering, he stared angrily at Niall who simply sat back smugly and raised an eyebrow in challenge.

So what if it had been years since he’d had a woman? Was it so wrong that he’d grown bored of the fae and their games? He was not without offers, he just couldn’t tolerate the shallow bedplay and endless vapid women with no desires past their own schemes. He wanted something deeper. He was no longer young by fae standards and he was tired of the artifice.

His thoughts shifted back to Niall’s offer. Time Aboveground, perhaps a woman or two? His mind immediately conjured a young woman with dark brunette hair and deep green eyes and his body immediately tensed at the vicious response he still had all these years later. Bitterly refusing to acknowledge the response to Sarah’s sudden appearance in his mind’s eye, he almost shattered his wineglass as he roughly slammed his drink down on the table and rose.

“Fine,” He hissed, avoiding his friend’s gloating expression. “If only to stop your endless whining. You sound like a blithering female.”

He ignored the sudden bark of laughter from his friend and the stares from the court as he left the banquet hall to seek refuge in his own quarters with a bottle of brandy.

Niall leaned back and avoided the looks of the other nobles that glanced back his way, knowing they eagerly hoped he would enlighten them on the Goblin King’s abrupt departure. While he entertained them for the sake of policy, he neither wanted nor cared for the court’s inane favor. He stared back blankly at the others until their gazes grew uncomfortable and they shifted onto other more interesting topics amongst themselves. If it wasn’t for his father sitting on the high throne, he was sure that he would also be a pariah for still maintaining an open friendship with Jareth.

He motioned for a servant to refill his wineglass and mulled over Jareth’s brittle manners over the past decade. He missed his old friend’s affable humor and coughed it up once more to the mortal girl he’d lost to some ten mortal years ago. The rumors were minimal, but he knew that wasn’t what really dug at his friend, Fae had lost to mortals before.

He calmly reached into his breast pocket and conjured an image in the small circular mirror he carried, briefly studying the woman in the reflection. She was out with friends, dressed in a lovely mauve wrap dress that accented her slim figure. Objectively, he admired her beauty, but it was the shine in her eyes that he knew what attracted his friend.

Years past, for the first few weeks after she had left the Underground, Jareth was inconsolable and nearly spoiled several trade agreements in his avoidance of court functions. Determined to get to the root of the cause of his friend’s strife, he had persisted until Jareth, albeit very drunkenly, had admitted his problem. It had taken considerable effort, but Niall worked enough magic to ensure Jareth would not remember his dark confession, Niall knew his pride was legendary.

He was in love with his mortal runner.

Remembering his friend’s very forced confession after several bottles of brandy, Niall stared with troubled eyes at the image of the woman in the mirror. He’d been idly observing her for years – fascinated with why Jareth of all people would be in love with her, a mortal – but he’d begun to see it with what she had accomplished in her short life. She had graduated top honors, spent time abroad in the Aboveground working for the United Nations and Hunger Refugee camps and had then taken a position at a non-profit that catered to the underprivileged. This was not a self-centered woman, no. While he knew Jareth was still angry at her for besting him, Niall had to admire that she had taken the lessons the Labyrinth taught her and used them well so far.

It also didn’t miss his eye that while she had a string of lovers for the first years she had matured physically, she had been without a paramour for years.

Did Jareth spy on her also? He had to – right? Or did he? Jareth set the standard for self-punishment. Did he know she still had his book and read it often?

Niall sighed and shifted his fingers, dismissing the conjured image of Sarah Williams before anyone noticed the conjured woman in the mirrored reflection. Putting the mirror back in his pocket, Niall drained the last of his wine and stood, heading for his own quarters. He had a reunion to plan.