Period Drama AU. What Happens when a married Emma Cassidy falls in love with another man ? What happens when Killian finally finds the woman he's willing to push aside honor for ? 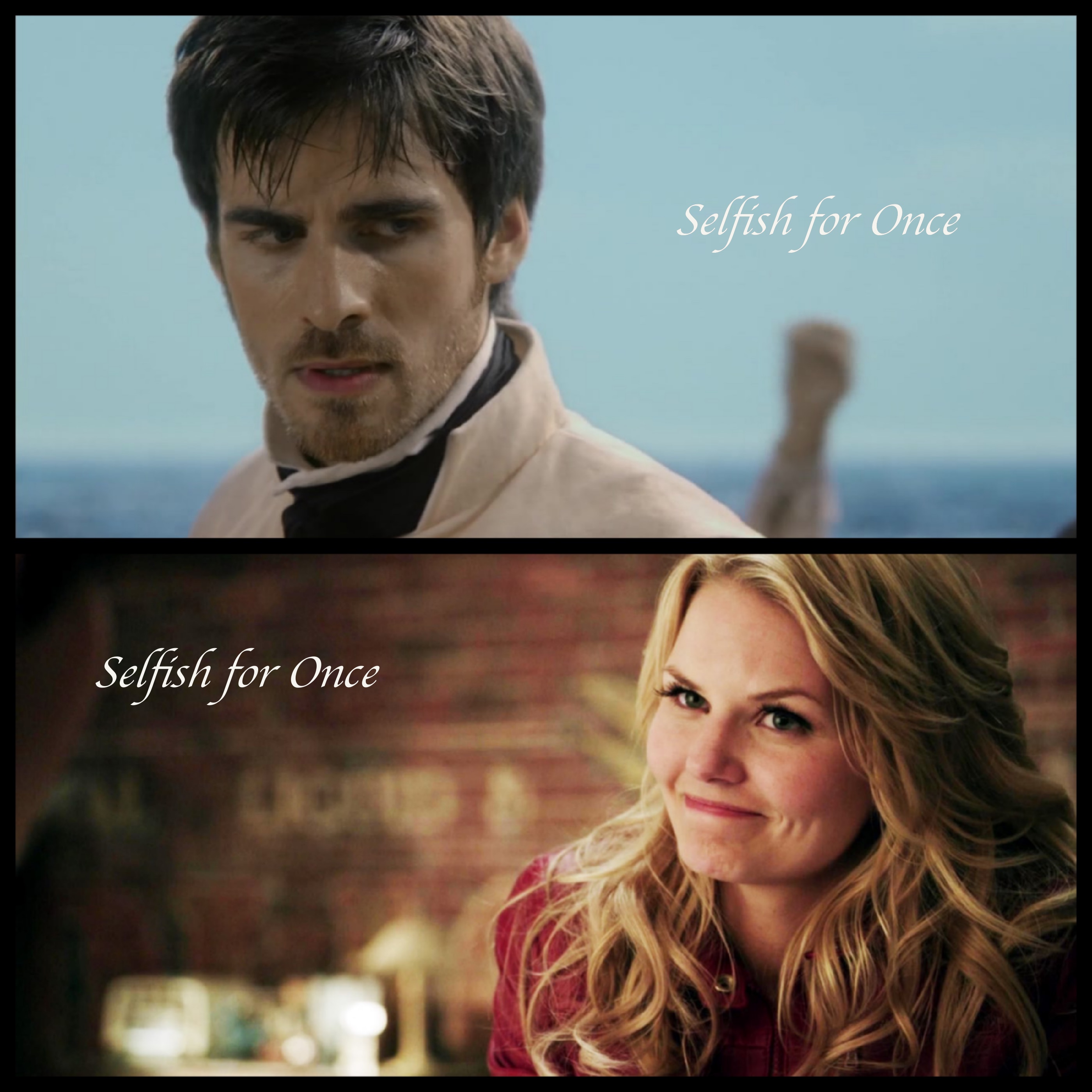 Emma rushed into her husband's office, interrupting his work. “I need to go to Misthaven as soon as possible, my brother and Snow have gotten into a serious argument and he's pleading me to intervene” Unable to give her his full attention, her husband continued his revue of the document he was handed by his assistant as he waited for him to sign it “How long will you be gone my dear ?”

“I believe I won't need to be away for more than a few weeks, I have asked for my luggage to be readied and I should be able to leave tomorrow” Emma stated resolutely.

Lowering the report he was reading, he asked everyone present in the room to give them a couple of minutes and closed the large wooden doors “ So soon ?” he looked at her shocked and puzzled.

“I did say I needed to leave soon, Neal” Emma answered, a witty smile on her face.

“I did, and he'd like to accompany me and see his cousin in Misthaven” she said her heart full of hope.

Neal considered her request “ I don't think it's a good idea Emma, I cannot permit it, the boy needs to follow his tutor's lessons more thoroughly, and as I do recall, an exception was made not that long ago and it's for that reason that I have to insist on him staying”

Huffing and staring at the floor for a moment, Emma looks back at him and nods “I know you're right, but that makes me very unhappy”

“It will only be a few weeks, you said so yourself ” Neal smiles at her before opening the door and letting everyone back in.

Emma married Neal at eighteen when he was 38, giving him a son soon after. Although their marriage was one of convenience, she developed affection for him and didn't consider herself as an unhappy wife but rather as a lucky one, for at least she got along well with him and liked to consider him as a friend despite their age difference. Most of her friends and acquaintances had married or remarried out of convenience, for wealth or for a title. She could count those who married out of love on one hand and her brother was one of them.

“ Et ici ? ” (and here ?) Liam asked the maid as he kissed her neck. She hummed in approval, urging him to move lower, which he did. Kissing her shoulder and continuing his journey down while his hand lifted her skirts, his hand touching her naked thighs and moving upwards.

“Ne l'est-il pas ?” (isn't he ?) Killian said pushing the curtain they were hiding behind back and giving them both the fear of their lives.

Excusing herself, the maid ran away embarrassed and hoping no one else finds out about the dalliance.

“ Did you really need to do that Killian ?” Liam sighed in frustration at his brother's behaviour before rubbing his face with his hands and taking a deep breath. “You almost killed the poor thing in embarrassment”

“ Should have thought about this possibility before initiating anything behind the curtains in the library, anyone could have came in and heard her moans, she's lucky I'm the one who interrupted you. Were it anyone else, she surely would have lost her position”. Despite his popularity with women, Killian was not a man too fool around. He was what his older brother liked to say an “honorable man” who valued good form above all, when he himself has abandoned it long ago. Still, Killial couldn't believe his brother's foolish behaviour.

He had seen him act recklessly before but it seems like the more he grew up the more reckless he became, almost defiant. He liked to break social norms and never cared about his reputation, thankfully he had a brother and a father willing to do anything or pay any amount of money to hush down any rumor or scandal he was part of, not only for their sake, but also for their mother's sake, who still saw her sons as her cute little boys who could never do wrong.

“ What do you want Killian ? Did you interrupt us for a purpose or just for the sake of interrupting ?” Lian said moving from behind the curtain and sitting on a comfortable chaise in front of the fireplace. Killian followed him “ No, I was actually looking for you. I believe mother would want to go to the Opera tonight before Regina's reception, will you join us ?” his mother loved the opera and ballet and she would always take her boys with her when she would go as they grew up.

“ Of course” he said without a second thought. “What about father ?” he asked already knowing the answer. Killian sighed looking at him, and it was the only confirmation he needed.

“Wonderful, I can't wait” Liam said sarcastically before leaving the room with an ironic bow to his brother.

Nearing the city, Emma stared at the little portrait of Henry she always kept with her, she already felt like she missed him. Emma could not believe he was 10 already, time passed so quickly. She loved her son above all, sometimes she felt like he was the only one in the world to truly understand her, and she him. They both craved adventure and knowledge, and they both felt out of place in the small town where they lived.

“That's my son, Henry, it's the first time I leave Glenheaven without him” Emma handed the portrait to the lady sitting in front of her on the train. She looked at the portrait and smiled affectionately, “he's such a handsome young man, you must be proud of him.”

“I am, he just turned 10 last June and he already acts and thinks like a grown up.” Emma could not believe he was 10 already, time passed so quickly. “ I'm sorry I haven't presented myself, I'm Countess Emma Cassidy”

“I'm Princess Alice Jones.” she bowed her head gracefully at Emma. “ I am actually joining my sons in Misthaven, I expect an engagement might be in order soon” The lady smiles excitedly before adding “I don't believe I have seen you before dear”

“That's a shame, I'm sure Misthaven society would be fond of you”

Time passed by quickly as the two ladies talked about their sons, literature and their travels around Misthaven and the Enchanted Forest. Countess Cassidy told her about her Henry's fascination with fairy tales and mythology and Princess Jones shared stories about her sons growing up.

When the time came to leave the train, the two women embraced. “Well I hope we get to meet again soon Miss Cassidy” Alice said before exiting the wagon. Feeling cold, Emma closed her white fur coat and looked through the window for her brother but instead found herself staring at Alice as she joined a young man she assumed was one of her sons. Turning around, the man's blue eyes caught hers and wouldn't let go for what seemed like eternity, but was actually 5 seconds.

“Emma ! Oh how I missed you little sister” startled, she turned around and saw David running to her, squeezing her with all his strength before letting her go. “I can't believe you actually came, it's been so long ! Too long” recovering from her surprise, Emma smiled genuinely at her brother.

“I wish I could have came sooner brother” Emma said, regaining her breath after being nearly chocked. She really loved spending time with her brother and her sister in law, Snow. It was always a pleasure seeing them and their son, Leopold. “How is Snow and Leo ? Are you still not talking ?”

“I'm afraid she still won't talk to me, she doesn't appreciate my decision to join the army in the prospect of an impending war” David looked preoccupied, he understood his wife's objection was based on her fear to lose him, had he been in her place he would have reacted the same, however he had to think of his country and his duty.

“War ? David” Emma kicked him on the shoulder “ Why are you joining this foolishness ?”

“Emma, I can't just sit around and wait for Arthur to invade our Country”

“No David, but you could have contributed to the war effort by any other mean, you could have made a donation or built a hospital for the injured” Emma felt a mixture of disappointment, pride and concern. She never doubted her brother's bravery – she saw it first hand when she foolishly jumped in the freezing water to save a little boy from dawning and he jumped to rescue the both of them, saving her and catching a cold that almost took his life at only 13 – but she couldn't deny that his will to save his country and countrymen will undeniably result in the death of some other.

“Leo is excited to see you, he has been asking about you and Henry a lot lately, says he can't wait to show you how grown up she is no” David changed the subject as Emma climbed with him in the carriage, and she decided to let it drop for now.