X-Files AU set in 1931 Berlin, a bit of a mix of Cabaret and Moulin Rouge.

Mulder is a man who's seen war. Scully is a woman who's used her body to survive, a war of its own kind. Now a singer at the Kit Kat Club in Berlin, she spends her days dealing in secrets and nights singing love songs she doesn't believe in.
Until Mulder. Assigned to write about the club and the secrets underneath, Mulder realizes he may soon be in over his head, an American in Berlin—especially when he starts falling for Scully...

I've since revised and updated this fix and will be uploading chapters on Fridays! Comments and kudos are appreciated!

Revised version of the fic originally posted in August, now with gorgeous art by mypanicface.tumblr.com, be sure to check her out!!! 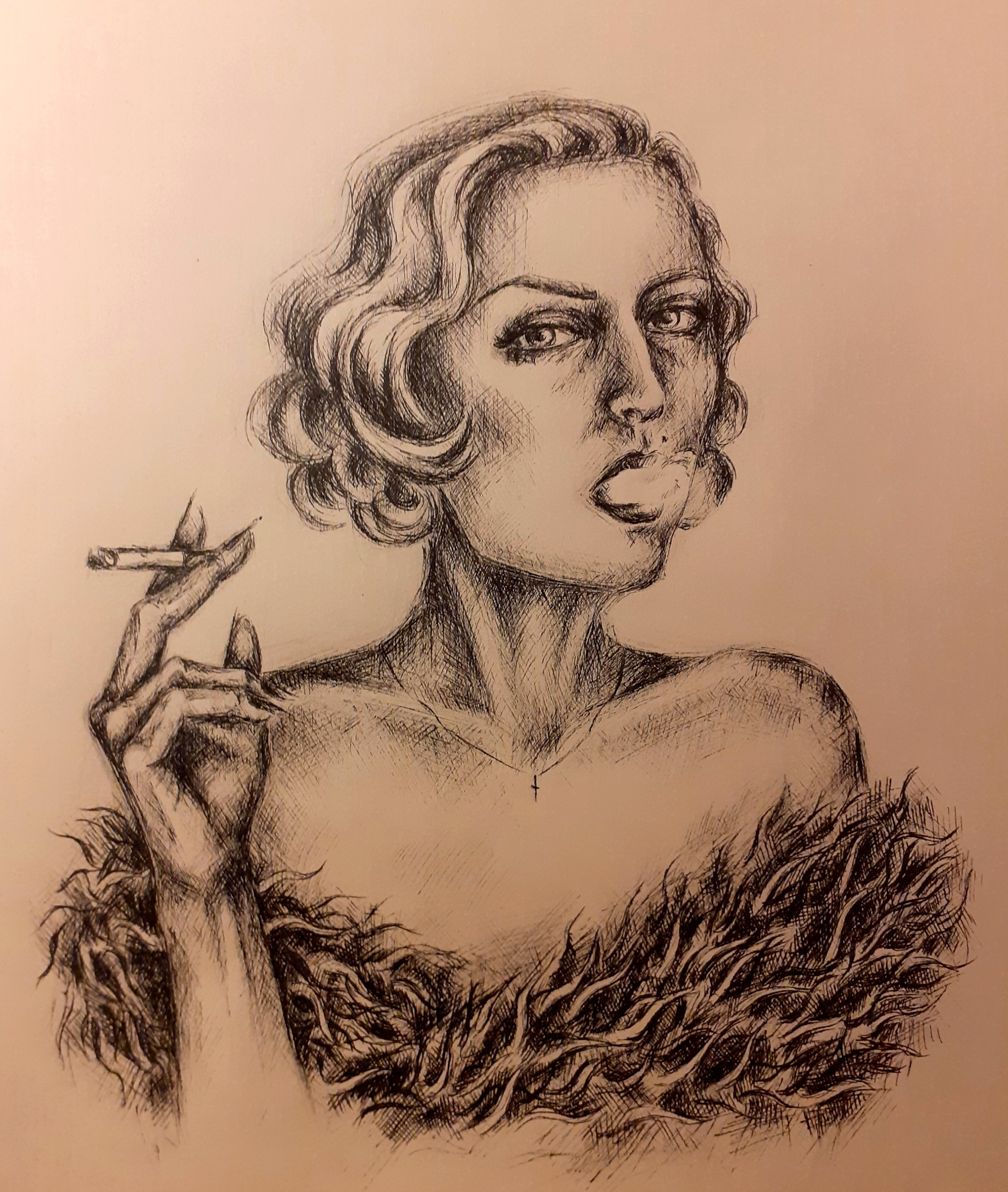 Germany is not a safe place for a Jew.

He knows that, and yet he’s found himself here, a place he never wanted to be again.

But Fox Mulder has always liked a good adventure, a good mystery. Even better when the mystery involves a nightclub, sex, dancing, girls.

Besides. He is young and he is invincible, and his family is Dutch so he always figures he can escape to Holland if need be, if things get a little too intense for his taste. His Dutch is poor, his German is worse, but he always has a way out if he needs it.

Here is what he notices first, fresh from the Potsdamer Platz Bahnhof, luggage still in his hand and sweat on his brow: the smoke. He briefly gave up smoking when he was in the Army (God, was that only a few years ago?) but the smell makes his mouth water, brings it back, and his hands are already itching for a cigarette. But certainly there will be some at the club, and if not, then at least there will be beer.

He knows he should find a phone before he does anything. Call his American friend, Skinner, old Army buddy from back in the day, back when they were boys who didn’t know better. He’s not that old now but his body likes reminding him of his limits, even at 33.

Truth told he should call Skinner anyway, get more information on what exactly the fuck he’s doing here, why he ever agreed to come back to this God-forsaken country, why he’s agreed to investigate some cabaret club out in the middle of nowhere.

But he was bored in the States. Office work doesn’t suit him.

Conspiracies, chasing monsters—that suits him. So when Skinner called him out of the blue and asked if he’d like to go back to Berlin, something fishy was happening, well—

how could he say no?

The Kit Kat Klub is dim, as smoke-filled as the Bahnhof had been. But the girls are hard to miss. Women, he should say upon closer inspection, though he’s pretty sure there’s at least one man in drag.

How has this place not been shut down yet?

He takes a seat at the bar and sets his suitcase next to him and orders a beer, his eyes traveling around the dimly lit space. There are chairs pushed against the walls, a baby grand in the corner, space on the floor for dancing, and an incredibly small stage.

And the girls. Women. In lace and black and almost nothing, sauntering around, laughing at gentlemen who are far, far wealthier than Mulder. They give him a glance and they see the suitcase and the outfit and they smirk and turn away, a smirk that says he can’t afford even one of them for the night.

He doesn’t mind. That’s not why he’s here, not anyway.

He takes another sip of his beer, forgetting how strong German brews are and nearly choking on it. A hand pats his back, and he coughs, turns.

The man sitting in front of him has to be official. Has to be. He’s not wearing the uniform of the SS, but Mulder’s spent long enough with men in authority to recognize one when he sees one.

The man is old, and he smells like smoke, but a different brand than what’s in the bar.

“Careful,” he says in German, the syllables heavy in Mulder’s ears. “Wouldn’t want you to choke before a woman even dances with you.”

“I’m not here to dance,” Mulder says, deciding on English, and the man laughs.

“American. Of course you are not. What’s your name?”

Mulder knows enough to know that’s not the word for the animal fox, but he smiles and lets the man have his laugh anyway.

“Okay then, nur Fox, what brings an American man to Berlin—to the Kit Kat Klub—if he’s not going to dance?”

It’s a joke between him and Skinner that became his cover, drunk one night while Skinner read Mulder’s letter home to his mother, damn you shoulda been a poet, and if the war hadn’t happened maybe he would’ve been.

“Surely an American can write anywhere.” The man’s smile doesn’t quite reach his eyes.

“True,” Mulder says, considering his words, “but there’s no place like Berlin.”

The man raises his glass, considering, as a spotlight floods the room. An emcee’s voice fills the air, sardonic and playful, though Mulder can’t understand the words. He thinks he catches a woman’s name but he can’t be sure.

He is captivated by her immediately. Her hair is bright red, a fire under the spotlight. She’s small but in perfect control of every movement, her skin creamy and white and pale. Her lips are as red as her hair. She’s in a black corset, heels, stockings that reach up her thigh.

When she locks eyes with him, he forgets all about the mission. About everything but the woman in front of him.

Her gaze flicks to the man beside him and falters, just for a moment. But she turns her attention back to Mulder and gives him a wink.

Somewhere, a band starts playing. And the woman starts singing. Her voice isn’t strong, but it’s low and husky and inviting, and Mulder wants to drown in it.

“Captivating, isn’t she?” the man next to Mulder says, and it takes Mulder a minute to register that he’s speaking heavily accented English. “Came here only a month ago and immediately became our headliner. Brings in more than half the girls combined.”

He glances over at Mulder, who understands then who the man is—Der Natter. The viper. The owner of the club, the one Skinner warned him about.

Mulder licks his dry lips, takes another sip of his beer. “Who is she?”

Der Natter tips his head. “Her name is Dana. I am certain you cannot afford her.” His voice is cold, matter-of-fact. “But you are a writer, and she does like her men romantic. If she likes you, if you stay—” and here his eyes cut back to Mulder— “I may have a job for you.”

The name rolls around in his head. Distinctly, decidedly not German. He likes it immediately for that.

“She’s gorgeous, no?” Der Natter says. He stands and claps Mulder on the shoulder. “Maybe if you’re lucky, I’ll arrange a visit between the two of you.”

Mulder chokes down the last of his beer. “I’d like that.”

He pretends not to notice the way the man’s eyes linger on Dana. Already he feels possessive of her, even though she isn’t his. She does two more songs, each more sultry than the last, each time a little more clothing coming off. Mulder finds himself drooling.

He’s not the only one. Most of the men in the car can’t take their eyes off her, to the dismay of the girls around them. It’s clear since she arrived they haven’t been getting as much business.

There are whistles and catcalls as Dana finishes her set, winks at the audience, then heads backstage. Mulder nurses the last of his beer. Der Natter left his side awhile ago, and now stands in a corner talking to a younger man, gesturing wildly. For a moment Mulder briefly entertains a fantasy of going backstage and finding Dana while Der Natter isn’t looking, forgetting what assignment Skinner gave him and just getting to know the woman with the red hair.

But then reality cuts in. He still needs a place to stay. The suitcase sits by his side. Skinner had given him the name of another contact of his Mulder was free to stay with, but if he’s honest, he wants to be close to the club.

He heads up to Der Natter. The beer makes him bolder. “Mein Herr,” he begins, for he at least knows that, “would I be able to trouble you for a room nearby?”

The man laughs. “You have known me all of ten minutes and you come to met asking for a room? Surely you would have found one before you came to Berlin.”

Mulder licks his lips. “If I may be so bold, the setting of the—the club, is more inspiring than I anticipated. I’d be honored to have a room near the establishment. I can pay,” he adds, as if that will sweeten the deal, when in reality it’s what’s expected.

Der Natter pauses and considers him. Mulder feels distinctly as if he’s being x-rayed. He watches as the man pulls out a cigarette and turns to the younger man next to him to light it. He takes a few puffs, still considering Mulder.

“You’re in luck, Fox,” he says after a minute. “I think we can work out a deal. My associate Krycek needs lessons in English. Who better than a writer?”

Krycek. The name sears itself into Mulder’s skull. Krycek’s eyes appraise Mulder, who swallows. As distrustful as he is of Germans, Russians are worse.

“Pleasure,” Krycek says, and when he shakes Mulder’s hand, does it linger a little too long?

“If you give him—let’s say weekly lessons—then the spare room above the cabaret is yours; I have no use for it.” Der Natter smiles, all teeth, and Mulder tries not to cough from the cigarette smoke.

“I can do that,” Mulder says. The older man nods and seemingly out of nowhere, presses a key into Mulder’s palm.

“Frau Schmidt is the landlady, tell her I sent you. If she protests, tell her again,” he says. “You are my guest now.”

The smile he gives Mulder tells him he would eat him alive the first chance he got.

“And, Herr Mulder? Welcome to Berlin.”