This is a collection of imagines [from my blog on tumblr - thranduilsperkybutt] involving Hannibal [NBC] characters! Only SFW fic is in this collection, so enjoy! Any additional warnings will be posted in each chapter's Notes.

Posting out of order bc this is yet another that tumblr thought was NSFW... 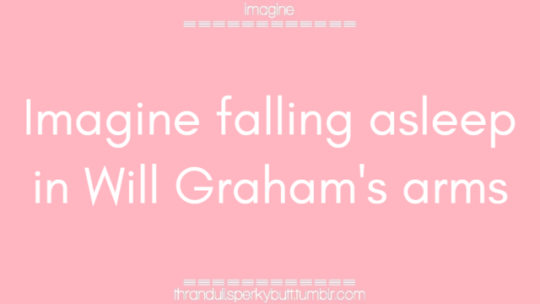 His breathing was even, soft. The worried lines that cut through his face dissolved with the veil of sleep because, for once, he wasn’t dreaming a harsh dream. You studied him through the darkness, time almost suspended with the pause you took as you relished in the feeling of his arms around your body, holding you closer than he usually did during the daylight.

He was warm, nearly too warm if it weren’t for the fan spinning silently overhead. The sparse moonlight filtering through the bedroom window caught on the shadows of his beard. You were glad Will was the last thing you’d see before you went to sleep. Snuggling further in his grip, you take a breath, closing your eyes as you try to let your own worries wash away for at least the next few hours.

Chapter 2: Hannibal Lecter - being one of Hannibal’s patients and he discovers your secret, that you killed and cannibalized someone. It haunts you and that’s why you are seeing a therapist but instead of helping you, he encourages you to embrace that side... 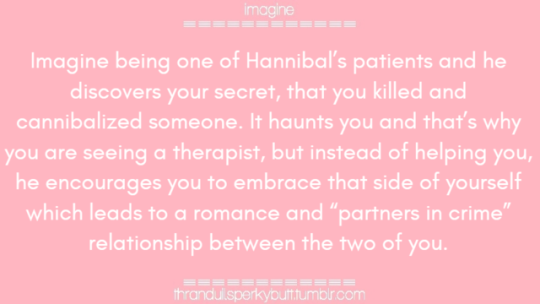 Imagine being one of Hannibal’s patients and he discovers your secret, that you killed and cannibalized someone. It haunts you and that’s why you are seeing a therapist but instead of helping you, he encourages you to embrace that side of yourself which leads to a romance and “partners in crime” relationship between the two of you.

It was dangerous to talk about the true reason you were seeing him, but at this point you didn’t care about the possibility of Dr. Lector’s mandatory reporting, or the idea that you would be locked away for your heinous crime. You had been run ragged by the haunting guilt, the constant dread and disgust at yourself that lingered around each and every corner. Not even your weekly therapy visits could help anymore. You had isolated yourself, and only seemed to be getting worse.

So when Dr. Lecter pressed you, asking you in a gentle, pressing tone, “What is it that you cannot tell me?” you found that you could not keep yourself from the admission. The weeks of seeing him, of his words whittling away at your resolve to take your sins to the grave, they wore on you, until you had no more strength to keep it from him.

“I…” you breathe a slow, shuddering breath, not meeting his eye as you focus intensely on a bookcase on the wall behind him, “I hurt someone… I killed them and— I couldn’t control it. I can’t explain it. I had this urge— I had to eat them,” strangely, there’s a sort of relief that washes through you at having finally confessed to another person the events of that night, months ago. Your voice quiets somewhat as you admit, more to yourself than to Dr. Lecter, “I enjoyed it, too.”

Silence permeates his office, the sound of your own heart pounding harshly in your ears as your eyes slip to meet his own nervously. What were you going to do now? You told him the truth.

More importantly, what would he do?

Whatever you had predicted— a look of disgust, or maybe fear, perhaps a threat to call the police sent in your direction— was not what you found upon further observation of the psychiatrist sitting coldly with one leg crossed along the other, as calm as if you had told him you enjoyed the weather, rather than the fact you had consumed another human being. Dr. Lecter, leans on his armrest, tilting his head as he watches you, looking for something you suppose, though you can only guess what. Was he looking for the flicker of a lie? Or perhaps gauging the immediate danger you were to him?

You cannot stand the silence a moment longer, forcing through clenched teeth with a tone of annoyance, “Aren’t you supposed to report me, now? Call the cops or whatever else? Tell me I’m insane or that what I did was morally wrong?”

“Do you want me to do those things?” Dr. Lecter levels you with, and for a moment you think he finds your agitation amusing.

You roll the question on your tongue, deciding if you really did want him to do what he should, legally, do, before you give him your answer, “Not really.”

A soft smile slips onto his lips, but it was anything from friendly. It was unnerving, sending a pang of adrenaline through you as you realize he was, quite literally, sizing you up. Deciding what to do with you in a way that was only filled with ulterior motives.

Just like that, the look is gone, once again hidden behind his typically unreadable friendliness that urged one to confess all their secrets to him.

“Then, I will not,” Dr. Lecter decides, leaning back in his chair, as if to continue your therapy session. “Would you like to tell me more about that night?” 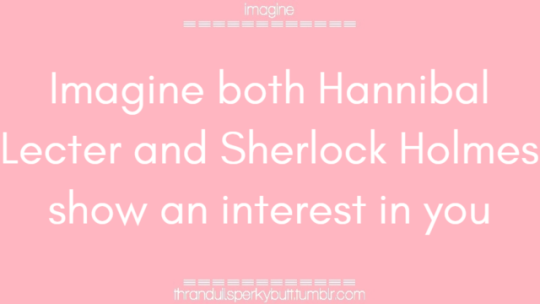 Imagine both Hannibal Lecter and Sherlock Holmes show an interest in you.

“I understand you are visiting from London, Mr. Holmes,” Hannibal begins, watching after you as you hurriedly rush around your home to grab your things before you were due to head out with the two for a case. His gaze slips to instead study Sherlock, “How long do you plan on staying?”

“As long as need be,” Sherlock’s reply is curt and all that is required, but it’s clear he is analyzing the psychiatrist through observation.

“You must be good friends,” if you can stay as long as you want here. Hannibal’s smile doesn’t reach his eyes, his unspoken words easily picked up by the detective.

“Okay, sorry!” you come bounding up to them, slightly out of breath in your haste, but receiving their attention with a smile nonetheless. “You ready? I’m sure I’ve already put us behind!”

Chapter 4: Hannibal Lecter - Imagine you’re a patient of Hannibal’s and after you confess to him that you murdered someone, he decides to take you under his wing and grooms you to be his accomplice and, eventually, lover. 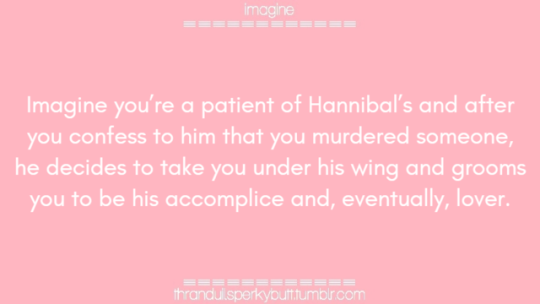 Imagine you’re a patient of Hannibal’s and after you confess to him that you murdered someone, he decides to take you under his wing and grooms you to be his accomplice and, eventually, lover.

Your grip on the counter top wouldn’t let up. You had done it again. Killed someone. Worst of all, you had enjoyed it. Your mind races, reliving the night, starting at the moment your therapist had showed up at your front door, coaxing you into the events to come.

You almost don’t realize when hands come to rest at your sides, just above your waist, the accented tone of his voice calling you from your thoughts, “Come, my dear.” You do as he says, of course, turning in his arms to follow him towards the hot shower he had started. He helps you in with such gentle hands that you almost could forget the way he had orchestrated the horrors of less than an hour ago.

“Hannibal?” your voice finds itself as he washes the blood from your back, watching the red escape down the drain, washed away until only clear water remained.

“Yes?” he murmurs, an almost therapeutic coax that nearly always managed to tear your darkest secrets from your throat.

He doesn’t respond at first, washing you clean before turning you where you stand, lifting your chin to draw your eyes towards his own. You notice they’re cold and, for an instant, you worry you’ve said the wrong thing. This side of him that he refused to ever let anyone see, had come forth in that quick instant, before he buries it deep behind his soft smile.

“Evil… such a subjective term.”

Chapter 5: Frederick Chilton - Imagine you and Chilton taking your children on a family vacation. 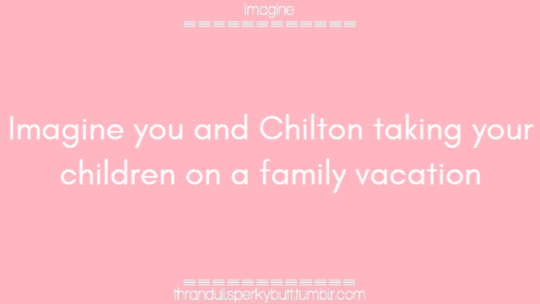 Imagine you and Chilton taking your children on a family vacation.

“My feet hurt,” you hear the whine of your four year old from behind you, causing a compassionate smile to light your face as you turn to find Frederick already dealing with the little one.

“Is that right? The car is only a little bit further,” he coos at the child, trying to reason with your baby, but you know this will not work.

“Honey, come here,” you hum at your child, watching it stagger forwards with a tired frown, before you scoop it up into your arms. “I’ll carry you the rest of the way.” Giving Frederick a kiss on the cheek, you offer him the reigns to your stroller, “Push the baby for me?”

He smiles, a tease on his lips as he counters, “Keep taking us on such athletic family vacations and you’ll be having to push me around next!”

With a grin, you shoot him the same line he’d tried to use on your child not long before, “Oh, but it’s not much further!”

Chapter 6: Hannibal Lecter - Imagine Hannibal being obsessed with you. 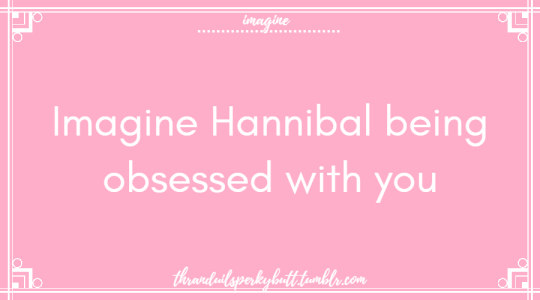 Imagine Hannibal being obsessed with you.

You knew as soon as your car made that unnatural sound that it couldn’t be good, and then the alarms started dinging.

The engine light was on. Groaning with both the worry and annoyance that came with car trouble, you pull off to the side of the road with your emergency lights on. This is the last thing you need at this time of night, with it pouring rain the way it was.

Digging out your phone, you’re about to call for service, when another car pulls behind you. When you recognize the figure who steps out of the car, you finally let out the breath you’d been holding.

“Hannibal, what are you doing out here?” you ask through the crack in your slightly lowered window, feeling the splash of the harsh rain on your face despite the mostly shielded window. He seems to have no care at all for the fact that he’s practically soaked by now, as he leans down to take a look at you.

“I was driving home and recognized your car. Are you having car trouble? Perhaps I can help.”

Chapter 7: Hannibal Lecter - Imagine you work at the university and lead seminars and Hannibal visits while you’re teaching. 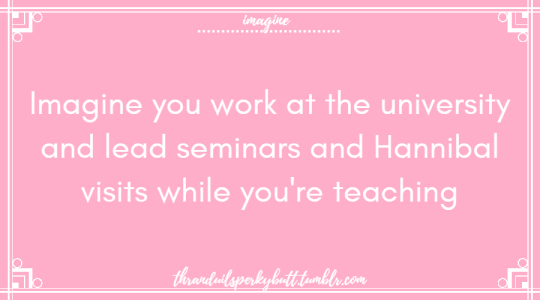 Imagine you work at the university and lead seminars and Hannibal visits while you’re teaching.

He entered halfway through your lecture, settling to a lean on the wall in the back of the lecture hall. Hannibal had a habit of catching you in the middle of class, but never did he interrupt. He simply waited, either because he had nowhere else to be, or perhaps he genuinely enjoyed your lectures— you had yet to ask him the facts of it.

As you reach the end of your lecture, wrapping up the section on feminism and its applications to criminology, you add for your students, “And don’t forget, your midterm papers are due this Friday at eleven fifty-nine sharp! Extensions will only be granted with extenuating circumstances, as always. Have a good weekend.”

You’re collecting your papers and your students are filing out of class when he makes his way to the front of the room, offering a soft smile from where he stood just offstage as your eyes catch his own, “Feminist criminology? I’m certain to have missed a start to an interesting lecture of yours.”

“Oh, don’t flatter me, Hannibal,” you laugh, tugging your back to your shoulder as you make your way off the stage to meet him on the floor. “Besides, you always miss the beginning to the lectures.”

“That is true,” his smile only widens, “but perhaps you can elaborate on it over lunch.”