Practically Perfect in Every Way

Help !! I can't seem to turn this off haha....a fic a day....my hands are going to fall off from all the typing and clicking.....
Purrfectlmt and Shadow_Yanice this is all your doing :P for hinting at the post-end story for what happened to those who were left behind :)

But here it is, Mary Poppins saves the day on International Women's Day :)

Mary Poppins, who was practically perfect in every way and our beloved Mycroft who has often been compared to her thanks to his umbrella and his prim and proper nature and his frankly magical and scary abilities.....Enjoy!! 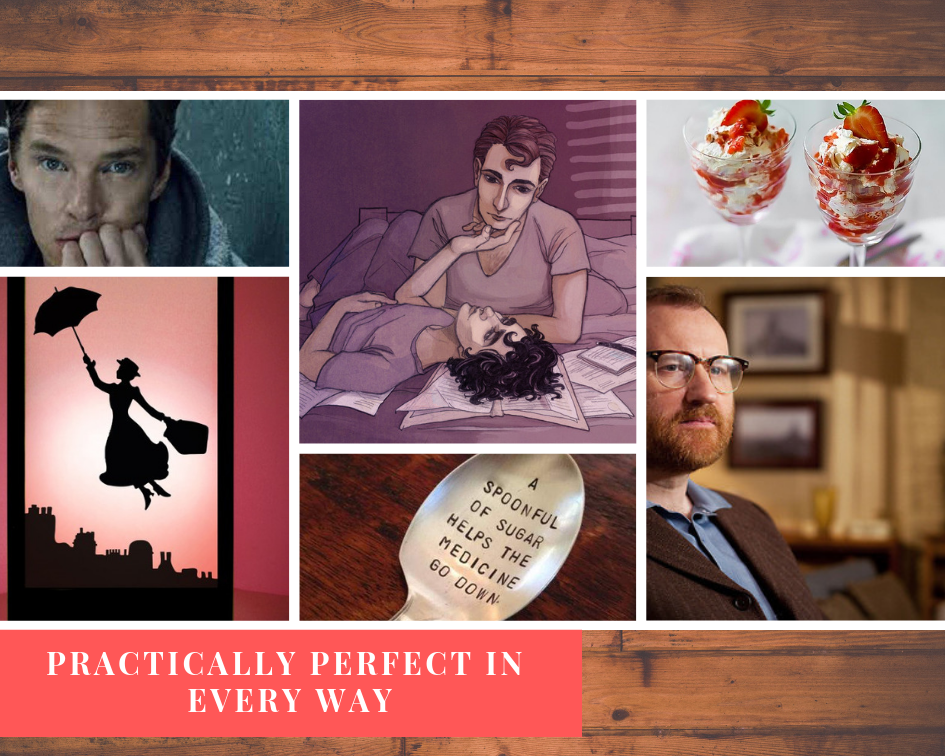 “I am BORRRRED!!!!” Sherlock said, grumpy and fidgety.

He slumped down on the bed and rolled over the papers Mycroft had methodically piled over the bed. He squirmed till his face was right below Mycroft’s and said “Pay attention to me.”

Mycroft sighed. He gave Sherlock a soft kiss. He remembered Sherlock doing this to him when he was five years old. Somethings still hadn’t changed……

“Lock, my love, please let me finish this. I promise I will make it up to you later. There is something fishy about these audit reports.”

“Sure, be my guest.” Mycroft said, supressing a smile. He gave it six minutes.

Bang on the sixth minute Sherlock clutched the papers and was about to fling them across the room when Mycroft held his wrist.

Mycroft was silent for a beat.

What could he say that wouldn’t make Sherlock feel guilty all over again for what they had done?

But even that one second as he framed his words was enough for Sherlock to pick up on.

“You do regret it don’t you? You wish you were still doing your diplomacy work and running the bloody world from Westminster Abbey don’t you?......and you hate me for it.” Sherlock mumbled as tears filled his eyes unbidden and he scrambled to get away from Mycroft’s hand that was reaching out for him.

Mycroft wanted so badly to hold him and comfort him but he knew that in such moments it was best to leave him alone. So he busied himself making Sherlock’s favourite pudding while his lover played the most melancholy and plaintive tunes on the violin.

Half an hour into this dirge Mycroft came up behind him, and softly held him and kissed his shoulder.

“Lockie? My one true love? Please?” Mycroft was pleading with him now, unable to see him so miserable.

It had been two long years and while it had gotten a bit easier to pretend to be Mr. Mark and Mr. Ross Willis, it had been difficult to give up on ‘Mycroft’ and ‘Sherlock’ altogether. Just two months ago Mycroft had had to physically restrain Sherlock from crossing the road to tell off a police officer who seemed to be badgering a homeless person.

“Shh. Sherlock! Let him go and we will help out the young woman later.” He had murmured.

He smiled at the memory.

Sherlock had built his own network of irregulars again, right here in Manhattan. He still managed to hail a taxi by magic and he seemed to have a friend in every newspaper vendor.

Sometimes Mycroft did have a moment of quiet panic at this and wondered if they would be noticed by anyone. But they had steered quite clear of anything remotely related to crimes and from what he could gather the media frenzy around the unexplained deaths of the powerful diplomat and the genius Consulting Detective from across the pond seemed to have well and truly died down now.

Everyone else also seemed to have moved on. Gregory and Molly were engaged to be married. Dr Watson was to tie the knot with Anthea’s friend Mary Morstan.

Anthea had managed to convey something to their parents after one year was over and he was pleased to find that they seemed to have accepted that and started recovering from the devastating loss of both their sons in the prime of their lives.

He couldn’t believe that he would ever say this even to himself but he actually missed their Christmas dinners and being back in his old bedroom even if it was reluctantly and only for one night……..oh that gave him an idea!

He opened his Kindle and searched for something, downloaded it and sat on the sofa, on the far end from where Sherlock had flopped down now, misery radiating from every pore.

He cleared his throat dramatically and started reading.

“Chapter 1 - East Wind,” He said. "If you want to find Cherry-Tree Lane all you have to do is ask the Policeman at the cross-roads. He will push his helmet slightly to one side, scratch his head thoughtfully, and then he will point his huge white-gloved finger and say: "First to your right, second to your left, sharp right again, and you're there. Good-morning.""

By the time they had seen Katie Nanna leave in a huff and the children were listing out what they wanted from their new Nanny, Sherlock had crept closer and was soon lying down on Mycroft’s lap, laughing at the tea party on the ceiling and restless when Mary Poppins told the children she will stay only till the wind changes.

It had been half an hour and Mycroft was now gently running his finger through Sherlock’s short spiky hair and trying to not feel sad at missing those luxurious curls.

His fingers stilled and he cupped Sherlock’s cheek.

“Lockie? I made you favourite Eton Mess for dessert. But maybe today we can skip dinner altogether and eat only that.”

And that was all Mycroft had ever needed.

The audit reports could wait. The dinner could wait. In fact, the entire world could wait, as Mycroft pampered his beloved Sherlock till he wasn’t so sad anymore.

After all, he was practically perfect in every way. And he was Mycroft’s.