Our mail server maintenance is complete, but some providers are still delaying or rejecting AO3 emails. Invitations and account creation will remain disabled a little longer while we monitor the situation.

Chaser And The Actual Chaser

John Watson had been always fascinated with vampires since childhood. He wanted to know what made them so different. By his teen, he already dissected a least a few vampires. But he was not satisfied yet. He wanted to dissect the core of the vampirekind. The so called ‘pureblood’. Watson could never had guessed that he would ended up falling in love with that pureblood instead.

Not actually related to Beneath, but same universe.

Most of the hunters were orphaned children. Having no choice, they were raised into doing the job that no one wanted to do. Some were family occupation. Some noble families were the top of the hunter association and thus their heir needed to be a hunter. However, it was not the case for John Watson.

John Watson was a normal man, born in a normal middle class family, consisting of parents, and two children, which usually would rather their only son to be a businessman as the younger sibling was a little sister. But that was boring. Too normal according to Watson’s standard. He was more interested into medical field. A human’s body was amusing, but do you know what was more amusing than a human’s body? A vampire’s. That was why Watson defied his family and enrolled himself to Hunter Academy.

His parents were so angry and dissappointed. Even though they were given money by the Academy and there was no tuitition needed to be paid for this. And from the point Watson stayed at the Academy dorm, he never ever contacted his family again.

The Academy was nirvana for Watson. He had to learn so much things about vampires. Their blood difference, their dna, their healing factor, their weird reproductive system. How amusing. Watson’s note was filled with notes he made on his research at his free time. When everyone else was busy socializing with other, Watson was at the library, learning everything he could about vampires.

Purebloods?
Vampires in general raises their number by turning human into vampires. But the success rate of this basic turning varies. It was said, the older the turnblood is, the higher chances his blood can turn a human. But in rare cases where a vampire omega is impregnated in their heat, they can give birth to a more superior kind of vampires. Purebloods. The difference between a turnblood and a pureblood in power level is extradiornary. A pureblood is almost unkillable. There are a few of purebloods, but hunter association has yet to capture one.

Watson was very interested in that thing. That day, his goal was set. He wanted to dissect a pureblood.

By the age of 16, Watson had graduated the academy as a top student while his peers were still doing their paper exams. And Watson quickly became a well known hunter. His skills were astounding even though he choice of weapon was quite a weird one. He had scalpels hising under his black coat which he would use literally like darts. He had another gun filled with s-bullets as well. And at melee, he equipped a normal katana sword.

But Watson never had a partner no matter how good he was. Even when it was the rule to be a two-man team, no one wanted to pair up with Watson because of one reason. He was too weird. He would always dissect the vampires he killed, sometimes asking for permission to do research at the association lab, despite of him not being a professor or anything close. And he would always share his passion with other mad scientists. He was really good that the scientists tried to make him into their worker instead of his original hunter occupation.

But Watson refused. Because he still need to dissect a pureblood. If he didn’t go find one on his own, no one would ever ever brought a pureblood to his table.

One day, Watson was just on his way home after his night patrol. He thought luck was yet on his side, but he was wrong when he found out someome had broken into his home and someone was looking over his research papers. The ones he made over the two years of his career of a hunter.

“I heard some rumors about a human dissecting vampires so I’ve come to check...” Holmes mubled as he read the words on the paper. Watson pulled his gun out in lightning speed and shot his S-bullet, Holmes caught the bullet with his fingers perfectly. “This is pretty neat. Watson, you’ll make a good scientist. But I do want to point out a bit of mistake you make. ‘Humans and Vampires are by default different species’ is a wrong way of thinking.” Holmes ended up his words with a smile.

“What do you mean by that?” Watson asked. He was curious. He wanted to talk to this vampire while he had his unseathed sword ready in his right hand while the left is still holding his gun.

“By the way, that vampire corpse in your bathtub should be disposed soon or it’ll be nasty. Don’t use bleach, okay? That will not help.” The vampire advised instead.

“Are humans and vampires the same being? How about purebloods? Are they the same with turnbloods?!”

Holmes chuckled. “Why don’t you find it out yourself?”

“What!?” Watson’s brows furrowed into annoyance.

Holmes leaned back on the table as he faced Watson. “You want to cut open my kind, don’t you? I’ve read your papers. You want to dissect a pureblood.”

Watson wanted to test that out so he shot the remaining S-bullets and pulled his scalpels, throwing them at Holmes all perfectly. Holmes manages to avoid all except for that one scalpel that managed to get stuck into his thigh. “Hm... I’ve been slacking off lately I guess,” He casually said as he pulled out that scalpel. He raised his head and grinned on Watson. And by the next second, he was completely gone from Watson’s sight, and was now behind him. “It’s my turn,” he said and took a bit on Watson’s neck from behind while holding the barely adult’s body hands, pressing them until he dropped his weapons. Even so, that was Holmes being nice not to just break the wrists.

Holmes licked his lips after he fed on Watson. “You have traces of vampire in your blood. You’re not a fully human aren’t you?”

“Haha. What’s with that scary face?” Holmes laughed at Watson’s glaring eyes. Scary and dangerous, yet, with both hands being hold like this, it was all but empty threat. “I like your taste, human. Come chase after me if you want,” Holmes said, smirking smugly as he dropped Watson’s hand after he gripped a bit harder at the last second and Watson whimpered in pain and fell on his knees.

Holmes was already done with his snack and new piece of information. He left through the window.

But that night was the night Watson swore he would kill that man. Put him into his dissection table and study him. And Watson spent the next ten years, just chasing that single pureblood that mocked him that night.

Being chased by Watson was fun. Not only Holmes was fond of this human, he liked his blood too. Watson’s taste was pretty unique. Plus the man never did stopped chasing after him, but he would not ask for help from the association because if they started an operation, Watson would lost his chance to dissect Holmes. Holmes got free exercise by playing with Watson which was good. No more sluggish movements. Holmes really appreciate the dedication Watson gave to him. A decade for a human was not a joke and Holmes understood it. And Watson had turned 28 and was very obsessed with him. Of course, Holmes was never serious. He would always go away and let Watson to try again next time.

This night was the same repeatance. Watson had been chasing Holmes from rooftop to rooftop, alley to alley, street to street, and he was out of stamina and weapons. He was kneeling at the ground while trying to catch his own breathe. Super pissed because he was still a loser tonight.

Holmes couldn’t help but smile at Watson. “Are you okay, my dear? You should go home and rest for tonight,” Holmes asked in front of Watson that couldn’t say anything, he was still out of breathe. He couldn’t even swung another punch. His whole body was tired. “If you like me this much, I don’t mind on making you mine.”

Watson, finally had a little breathe, looked up. “Do I... get to dissect you.... if I became yours?”

Holmes sighed. He would want a snack but seeing how Watson was so exhausted, he feared that biting the man would make him lost conciousness. It was dissappointed, but he would settle with bottled blood tonight or maybe hit Merlin’s bar for some good blood-wine.

Watson rubbed his own face and then forced himself up with a loud frustrated groan. He faced back and walk away slowly. “I’m done for tonight. Going home.”

And that earned Holmes a scalpel short straight into his chest. Apparently Watson still had one left and now he was grinning so proudfully that he managed to stab Holmes once. But that was it. Time to go home and sleep. 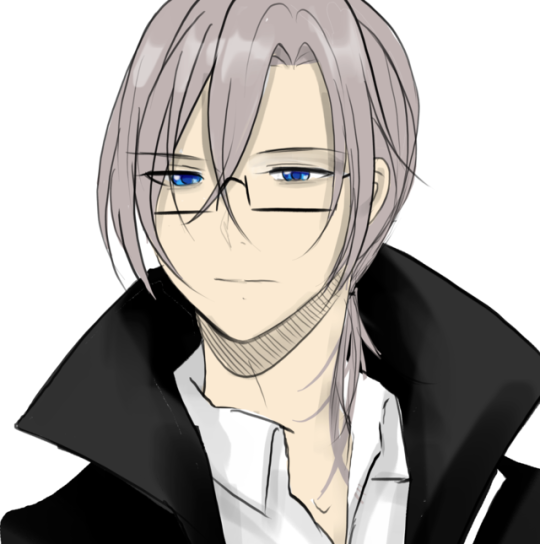