At Coney Island, Steve used to watch them make saltwater taffy. It looped and coiled, stretched but never broke, and the smell of it was a promise – the bite of salt on your tongue, the back of your throat, even before you opened your lips.

“Want some more?” and Bucky’s eyes were hooded, teasing, under the fairground lights. His tongue was touching his upper lip and the question had nothing to do with candy.

Steve smirked. “I do,” and later, when he bit down on Bucky’s lips – Bucky gasping under him, stretched around him, open for him – Steve tasted salt.

(New name - I was daphneblithe :) )
I spent SO LONG analysing frame by frame of that lacerating penultimate Endgame scene, God. I feel like I need hazard pay.
Thank you so much to lovely Frostbitebakery, @snoozebuttonfig at twitter, whose amazing art helped inspire this and has been a deep consolation in this time of trial!
Adoring thanks also to Hansbekhart and Girlbookwrm for accurate saltwater taffy consultation. 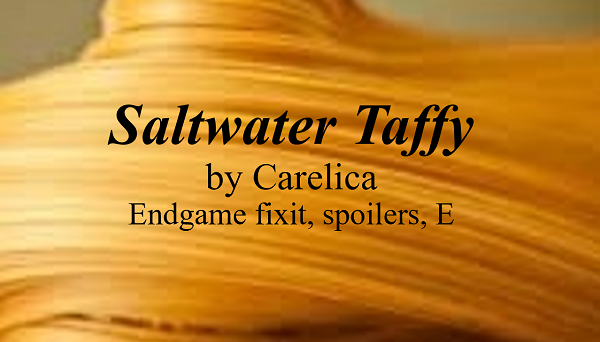 At Coney Island, before the war, Steve used to watch them make saltwater taffy. It looped and coiled, stretched but never broke, and the smell of it was a promise — the bite of salt on your tongue, the back of your throat, even before you opened your lips.

“Want some more?” and Bucky’s eyes were hooded, teasing, under the fairground lights. His tongue was touching his upper lip and the question had nothing to do with candy.

Steve smirked. “I do,” and later, when he bit down on Bucky’s lips — Bucky gasping under him, stretched around him, open for him — Steve tasted salt.

Now Bucky’s face is pale in the dim light from the streetlamp outside. Steve’s heart twists at the sight of it, touches Bucky’s lips with one hand, traces that dear curve, the cleft chin, the lips parted as if to speak, to kiss.

Bucky’s not doing either of those things.

Steve will never forget those moments they snatched just before Steve went back to the past. Bucky looked so resigned, like he wasn’t even surprised. “You’re going to stay there.”

“It’s not Peggy. Back then is — is your home, yeah? I mean.” Bucky shrugs, shoulders loose, smile heartbreaking. “I guess I. it’s not my time any more. I saw too many other times,” and yes, that’s true, Bucky’s been a time traveler more than any of them, waking in the cryo tank, seeing the world made new, over and over.

“Bucky.” Steve didn’t know what to say, he was torn, it was true, it does tempt him, to find a home in a world that makes more sense than this one, but how can Bucky think Steve would leave him? This isn’t the end of the line, nowhere near, but Steve can’t find the right words, and there is a risk, maybe he won’t make it back, maybe something will go wrong again and Bucky’s fear will come true.

The words in Steve’s throat were thick, urgent, making it hard to breathe. He should have reached Bucky, reassure, but he didn’t know how to say it. His effort wasn’t enough, and he knew it even as the dry words left him — “It’s gonna be okay, Buck” — and he stepped onto the plate.

Bruce checked in and Steve confirmed he’ll meet them back here, “You bet,” and he looked back at Bucky, met those wide gray eyes. Bucky was standing tall but slightly hunched, hands in his pockets, visibly bracing himself, but his expression wasn’t angry, or scared. It was worse than that. It was … resigned. Sad, but accepting. Kind.

It’s the line of Bucky’s body that made him realize. Bucky wasn't tensed because he wasn'tfighting. He’d given up on hoping he and Steve can have a future together, with them both so broken and changed. Fuck, this isn’t right — he can’t go like this — he has to speak, reassure Bucky before he—

When Steve moved into the past, time stretched like taffy, a thing you could pull and stretch, long skeins. And the substance of it hurts, because time was now a gap between them — space become pain — Bucky grab my hand! — and Steve hadn’t found the right words before he left.

When Steve came back — when Steve pressed the gadget and left the past and came back to now, to home, to him — Bucky staggered, nearly fell. Sam had to brace him, his quick eyes moving to Steve, and under Sam’s slightly narrowed gaze Steve felt briefly ashamed.

“Why surprised, Barnes?” Sam was forthright. “Steve was always coming straight back. Wasn’t he?”

Steve was the one to look away.

“You came back.” Bucky’s voice is rough against Steve’s neck and Steve can’t breathe with the guilt and grief of it, that Bucky felt that hopeless. He pulls back his head, looks down at Bucky’s wide gray eyes, the pain in them.

“Bucky,” and Steve’s hand is gentle on his face, cupping the shell of his ear with his palm, brushing the dark hair from his cheek. “I didn’t ever mean to go for long. You know I couldn’t. Peggy’s happy already, she’s married, Bucky, but even if she wasn’t, how could I stay back then?” He needs to make Bucky hear it, make him know it, and the words aren’t enough, but he tries. “You’re my home. Whenever you are, there is home. Whenever.”

Bucky closes his eyes, but something softens in his body, under Steve, warm and real, and that softening is a kind of trust, it makes Steve’s heart ache.

Steve gives up trying to talk. He’s failed with words already, he’s hurt Bucky with words he didn’t say, so now he will show him.

They’re gentle, at first. A kiss that gets deeper, hands stroking, breathing. “Not gonna break, Barnes.” Steve’s teasing, it’s a whisper against the shell of Bucky’s ear, and Bucky’s answer blends laugh and sob. Then, yes, Bucky’s resignation starts to melt, and Steve’s chest brightens, warm with the joy of it, as Bucky starts marking him. Bucky’s lips and teeth work down Steve’s neck, and Steve’s holding Bucky tight enough to bruise, sweat sticky, moving.

Time stretches again like taffy and Bucky’s lips are under his, salty with fear and grief. Now they’re biting and twisting, grinding hard and gasping soft, getting as close to each other as they can.

“Bucky, I can’t—” and he’s spilling into him, thrusting into the slick wet warmth of him. Grinding his hips to get closer, deeper, no boundaries between them. Steve’s defeated, helpless, joyful, and he says his next words against Bucky’s lips, blurs them against his cheek, his neck, “I can’t leave you,” and as if these words are what Bucky needs most, he arches, comes wet and hot between their bodies, with a cry that’s broken and whole.

Bucky’s cheeks shine wet, in this quiet, dark room, but his eyes are warm, and he’s smiling.

Salt and sweet, and love forever.

ALSO! The UNTAMED/CQL!! if anybody else is fascinated by this amazing show, please do hit me up on Discord DM (I'm Carelica#8448!) or twitter!

If you liked reading this, you might like this? — Love Among the Ruins, Stucky eerie romance, angst with a happy ending, historically accurate psychiatry, melancholy, devotion, wildly romantic tenderness
58k, explicit, illustrated with 21 works of art (some NSFW), and a playlist. (And archive warning for four scenes, but I have made it easy to skip those, and posted an alternative chapter).