“Rule? Me? No, no, no. I think there's a misunderstanding here. You have really got the wrong prince, I never lead anybody! Mr. Stark-“

“Tony, or father, but I think that´s too much for you now.”

“… Tony. My expectation in life is to be invisible and I´m good at it.”

I have no excuses for the nonsense I've written.

I mean, I was watching that movie again after so many years and I said, why not?

It's not that Peter Parker is an ugly boy, but he's not the most popular either; he's considered the classic nerd with big, thick glasses, his hair is too long and messy, and he wears second-hand clothes that a grandpa would wear. In his school, he's certainly not the popular one; popular ones are those like Flash, the blond, muscular brainless guy. Flash is also his bully, he doesn't spend a second in destroying his moods when he enters through the school door. Gwen Stacy is the most popular girl and the number one; unlike Flash, she’s smart and a good person. Peter knows that although he likes Gwen, she’s completely out of his reach. But it's not all bad for Peter Parker. He has two best friends, Ned and Michelle; Ned is just as nerd as Peter, a chubby and funny guy; Michelle, or also called MJ, is a weird girl for many, very honest and super smart. Without a doubt, all three are the perfect "losers” combo.

Peter's an orphan. Well, not quite so, he lives with his aunt May, a nurse although Peter thinks she's a Hippie from the 60s. His parents died when he was just a little kid, and his uncle just died two years ago. He's fine, it still hurts, but it's all right now.

Seeing Gwen and Flash kissing again is torture for Peter; he doesn't understand how a girl as beautiful and brilliant as Gwen can date such a complete asshole as Flash. Jealous, no doubt it's jealousy. Peter likes to imagine that he goes straight to Gwen, moves Flash aside and gives her a passionate kiss. Reality is hard.

“What? You never saw two idiots exchange saliva before?” yep, that´s MJ again. He ignores her comment, only Ned knows his crush is Gwen. His life at school sucks, but at least he's got the comfort at home. Or so he thought.

“Hey, Peter, how was school? Come on, I'll make you lemonade, it's a little hot today, don't you think so?"

“Well, honey, I need to tell you something. Come, grab your soda and sit down."

“Did something happen at your job? Please don't tell me you're giving me the talk. You did it when I was thirteen. I don't need any more traumas during my adolescence."

“Don't be silly, it's not that! the truth is... I've had to tell you this for a long time but I was waiting for the right moment. It's about your dad.”

“Um? What about him? Don't tell me I have a millionaire inheritance, I don't remember dad being that rich but-“

“I mean, your biological dad.”

Peter can't believe it. As if his luck wasn't already cursed enough when he’s only sixteen he has just found out that Richard Parker is not his real father. He lived a lie all his life.

But that's not all. It turns out that his biological father is still alive and he is a damn king of a place he never heard of before; It also means Peter Parker is part of the fucking royalty.

"Tony Stark. That's your father's name. He's the current king of Genovia, or something like that."

“He called, he wants to meet you."

“And why´s that? I mean, he's never contacted us before, why do it now?”

“Peter, he never knew he had a son until recently. Turns out Mary never told him you were his son. He would talk about this with you personally, I suppose.”

The young teenager has no choice but to agree to visit his... father? it's odd to call him that, but it' s what it's.

When Peter visits the meeting place, he can't understand what his eyes see. He never saw so much gold and beautiful things in his life! Maybe once when May decided to take him to an elegant and expensive restaurant, but that was the first and last time. Anyway, it doesn't compare to the place. His father is a handsome man, he won't lie. Muscular, somewhat tanned. Peter can immediately recognize his eyes alike in him, with his characteristic long eyelashes.

It turns out that his father, despite being a monarch, he isn't actually as unbearable with finesse as it should be; he doesn't care about etiquette, he almost doesn't act like he's a king. But Peter recognizes that the man has a style worthy of a king, in his own way, of course.

"Peter, I'm so sorry I wasn't present in your childhood. I know this is very sudden, but you're clever and I know you realise you're a prince."

“Well, yeah. But I'm sure there will be other princes like me, won't there?"

“Because my nation needs an heir and you're the next king, you're the direct heir by blood.”

“Why on earth would you pick me to be your prince?”

“That´s easy, you are the natural heir to the throne; that´s our law.”

“I don´t understand your law, to be honest.”

"You have cousins out there, but they're royal by marriage or because one of their parents married a royal member, whereas you, dear Pete, are royal by blood. You can rule. No, you must rule."

“Rule? Me? No, no, no. I think there's a misunderstanding here. You have really got the wrong prince, I never lead anybody! Mr. Stark-“

“Tony, or father, but I think that´s too much for you now.”

“… Tony. My expectation in life is to be invisible and I´m good at it.”

“Look, kid, I had other expectations also. But you´re my son and the legal and only heir to Genovia throne. I´ll help you to become a proper prince, don´t worry. You'll also have the best teachers to educate you about our culture. After a while, you'll even be able to live in Genovia properly.”

“Live in Genovia? No way! I refuse to move and rule a country! My whole life belongs to this place, and it will always be like this!”

Peter is refusing to the truth, he doesn't want to be a prince! His life was always about being in the shadows, not shining and being the centre of attention.

However, his aunt persuades him.

"Peter, give him a chance. He's your father, try to bond with him. If you don't like that lifestyle or it's too hard for you, you just go back to normal."

His sweet aunt knows the harsh consequences of being royal, not because she has experienced it, but because she understands that it must not be easy to be famous, much less to be a king or a prince.

"You're right; I'll give it a chance. What can go wrong? At least I'll get the chance for free travels."

Oh boy, poor Peter Parker, he has no idea.

Look at him, such a prince vibes! 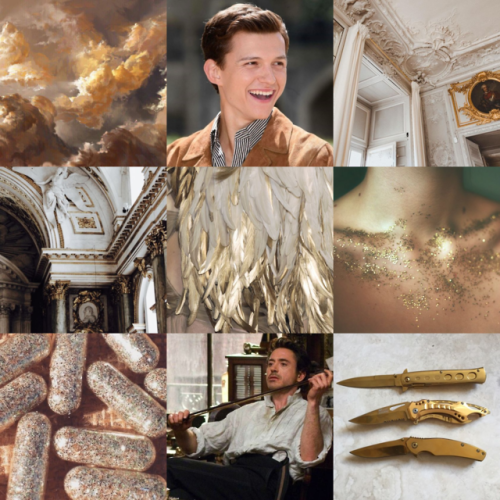 I decided to stick to the Flash of the comics rather than of the Sony-Marvel movies because the point is the image of the typical brainless white dude/bully at school. I also decided to add Gwen because... Well, you know how the original film is with that love triangle and Gwen is ideal for the role of the pretty white girl acceptable to society.