I missed you (but I haven't met you)

There were no preliminary studies required, no charcoal sketches, no model had needed to come into his studio to pose. As soon as Jon had laid eyes on the marble, he had known what he must do.

Written for the Jonsa 100 Drabble Challenge. Was tagged by @amymel86 with the the prompt “starved”. 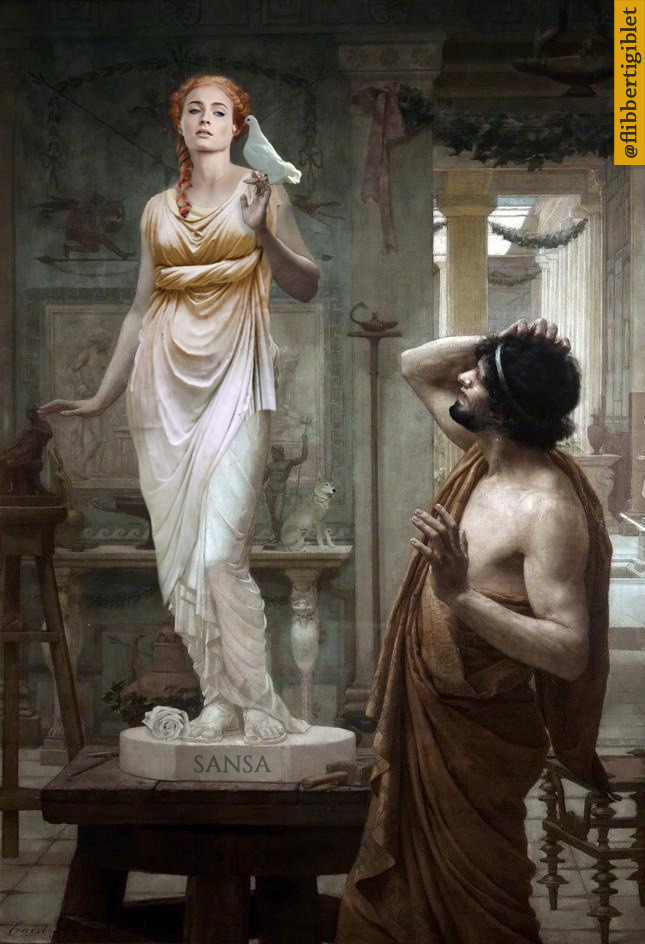 There were no preliminary studies required, no charcoal sketches, no model had needed to come into his studio to pose. As soon as Jon had laid eyes on the marble, he had known what he must do.

He had undertaken the task immediately; with hammer and chisel he began to carve life out of formless stone - eyes, ears, nose, chin based on some hazy, yet familiar image in his head. Day and night, he worked with fevered focus, stopping only for the occasional meal and a few fitful hours of sleep.

This was dedication was unlike anything he’d ever experienced before, but there was an urgency here, a sense of purpose. Almost as though there was already a fully-realized woman trapped inside the marble, and it was only his duty to set her free. It was a madness that he could not explain, would never say out loud. His feelings for Sansa – for that was her name, and he knew it with the same conviction that he knew his own – ran deeper than an artist’s devotion for his work.

By nature, he was a reticent man (and she, obviously, an inanimate object), but Jon often found himself speaking to Sansa as he sculpted. At first, it was merely murmured commentary on his progress (”an additional fold to your gown here, I think”), but later, he began reminiscing out loud of his childhood in the wintry lands of the North, of the games he used to play with his siblings, of the snow-white wolf pup that had been his unlikely shadow while growing up. Once, when on a whim he had started engraving her name upon her pedestal, he sang a half-remembered ditty that had been his youngest brother’s favorite tune, before he caught himself and stopped, embarrassed, and then amused at his embarrassment. After all, it wasn’t as though he had an audie-

Jon froze, eyes darting up to the still-unfinished face above him. There was nothing unusual to see (of course), so he shook his head in exasperation and returned to his work. He supposed he might be slightly delirious. Had he had anything to eat earlier? Or perhaps it was companionship he was starved for, that was all. When was the last time he had set foot outside his studio? He really ought to accept Tormund’s outstanding invitation for a meal and a drink.

He winced as he recalled the aftereffects of the last drink he had shared with his friend.

He carved the final “A” in her name, unaware that he was humming underneath his breath.

Jon wondered if he was truly going mad, for he had begun to fancy that Sansa was actually listening to him. Worse – that she was talking back.

He would ask her a question, or for her thoughts on his efforts, and he imagined he could almost hear her responses.

Yes, I like how you’ve made the curl drape over my shoulder, or

“Nonsense,” he’d reply out loud, smoothing out the contours of said appendage with a pumice stone. “It is exactly you –” he finished the thought in his head –perfect.

He adjusted its shape anyway. Just a little.

He carved a single rose by her feet, a tribute.

And then finally, finally, many months after he had first set chisel to marble, he laid down his tools for the last time, knowing instinctively that his work was done. He stepped back to look upon her form – long-limbed and lovely and lithe as the Maiden herself, but human, so achingly human in the details. From the slight creasing around her mouth that suggested an easy tendency to smile, to the roughened pads of her fingers that he had imagined to come from a passion for sewing, so lifelike was her countenance that he was filled with elation and melancholy both. He delighted in her completion even as he grieved in the certainty that he would never again achieve such heights of inspiration. More painful was the realization that he no longer had reason to – to indulge in whatever this strange connection was that he shared with his creation – no! – with Sansa.

Overcome, he clasped her hand and pressed his lips upon the fingers he’d so carefully, lovingly shaped. Immediately he felt like a fool. Loosening his grip, he began to withdraw, only…only suddenly it seemed to him that it was not cold, unyielding stone beneath his touch, but warm, pliant skin. Impossible. And yet –

Pulse racing wildly, he stumbled back and laughed with incredulity as he watched a miracle happen before him – the manifestation of life, true life, and not just the appearance of it. For there was movement, in the rise and fall of her chest, the fluttering of her lashes. And there was color, traveling slowly from her head to her feet, where there had been only the stark whiteness of marble.

Her hair, red as the fire that burned in his heart for her. Her eyes, a luminous blue, turning to meet his gaze. A glow on those pale cheeks, and a sudden flush as she took in his astonishment. And her rosy lips, parting slowly as she drew in her first breath –

He did not dare to believe, to hope.

Sansa bent to pick up the flower he had sculpted – soft-petaled and blue now, a true winter rose. She brought it close to her face and inhaled deeply, smiling in pleasure and wonder –

And stepped off her pedestal.

Give this thirsty bitch some feedback. Or hit me up on tumblr. It's where this and my other edits reside.