MichiNyan and the Short Skirt

After so much resistance, Michi wasn't really surprised with how quickly his boyfriend would change out of the cosplay. A little sad maybe, but not surprised. 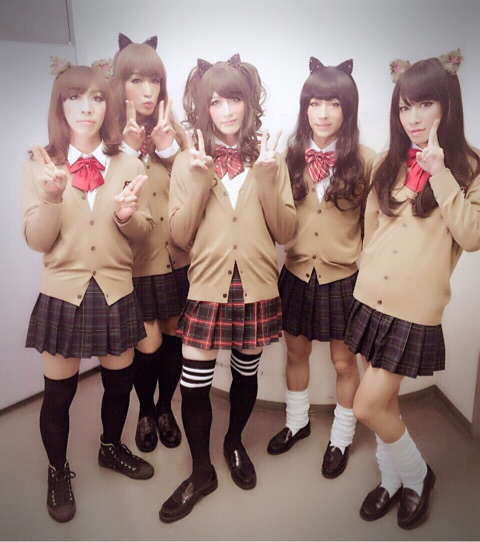 Out here in the real world, the cosplay was used once or twice for instores ... so of course the muses had to take it somewhere else. :p

Written for Season of Kink, for the "cosplay" square. Yes, the title is silly, but no one wanted to give me a better one, so there we are. :p

As much as You had resisted doing the school girls cosplay idea, Michi was hardly surprised when his boyfriend was also the first out of the costume.

“I have to run a couple errands, see you back at the hotel?” the guitarist said.

“All right, I –,” but there was no point in finishing, as You was already gone.

“I don't see why,” Daisuke said, tossing aside his wig before ruffling his hair. “He's got great legs!”

“Hey, stop ogling my boyfriend!” Michi protested, dropping his necktie on the counter in front of him, then slowly unbuttoning his shirt. “Go on, clear out of here, but the vans pull out at exactly 9:45 tomorrow morning, so be there on time or hitchhike!”

Even with as tired as Michi was feeling, he wasn't surprised to find himself the last one in their dressing room. And for once he didn't feel a need to rush, either, even though what he really wanted to do was go back to the hotel and crash. But he had no idea how long You's errands might take and he didn't want to be alone, either. At least here he didn't have that problem, though for how much longer, ah, that was a whole other problem.

“Hmm? Aiko-san?” he asked, pausing in wiping the makeup from his face to glance up at their costume manager via the mirror. “What's up?”

“Just mine,” he said, offering her a reassuring smile. “But I'll keep an eye out, just in case. I'm sure they'll turn up eventually.”

“All right. Thank you, Michi-sama,” she said before bowing her way out of the room.

Considering all five of them were using long wigs for their cosplay, it seemed especially odd that a pair of ears had gone missing. Maybe Aiko had miscounted? That didn't seem likely either. On the other hand, if one of the others had swiped a pair of ears, whatever the reason, Michi was reasonably sure they would turn up again soon. No sense worrying about it.

He had dragged his feet as much as possible, thanking staff and crew for all their hard work before finally shuffling back to the hotel. No sign of any of his bandmates in the lobby, but maybe that wasn't such a bad thing. Anyway, there was only one person he wanted to see just then: his boyfriend.

« Where are you anyway?
» Waiting for you.

« Is that all the clue I get?
» Well if you'd stop dragging your ass, you'd know where I was by now
» Hurry up!

Oh. OH! Feeling a bit stupid, Michi hurried the rest of the way to their hotel room. As soon as he saw his boyfriend, he rushed to close the door behind him, leaning back against it.

“I thought you hated this cosplay,” he said, his eyes trailing over those lovely long legs, one primly crossed over the other as You sat perched on the foot of one bed.

“Completely loathe,” You agreed, uncrossing his legs and then pulling them up onto the bed beside him “Despise, even.”

Definitely had to be wearing pantyhose with that short skirt, which was almost a shame, since Michi could easily imagine how hot those legs would look in garters and stockings. Something he was almost positive he would never get the chance to see, no matter what, so he would just keep the thought to himself.

“When we were making the schedule, you said this would be the last time we did this cosplay, so I thought....”

“You really are my favorite boyfriend,” Michi said, hurrying to close the distance between them.

“Pretty sure I'm your only boyfriend, Michi,” You fake-grumbled. “Like it?”

Michi slid a hand up a silky thigh and smiled.

You laughed and reached out, curling fingers over the top of Michi's waistband and tugging him closer.

“Hmm, well, that depends. Is that what you really want?” he asked, smirking.

Before Michi could answer, You was kissing him and pushing his hand into Michi's pants. That was fine with him; You always knew the best ways to touch him, to make him feel amazing.

Like he could think with his boyfriend stroking his cock like that? Michi whimpered and licked his lips, but it did no good. All he could think about was how good that hand felt and how much better it would be without his pants in the way.

“Still not really an answer, Mi-chan~”

Michi groaned, tried to force himself to think for a minute. Which might have been easier if his brain hadn't chosen that moment to notice his boyfriend was in the perfect position for something else.

“S-suck me,” he mumbled, wiggling his hips a little as he pushed his pants and boxers down towards the floor.

“So demanding,” You mock-huffed. “You could at least say please.”

You didn't say anything else as he shifted on the bed to better support himself through what he was about to do. And then wet heat had closed around the head of Michi's cock. He groaned, clutching at You's hair with both hands. Eyes closed, he let himself get lost in the moment, the way that tongue moved against sensitive flesh. When was the last time they had done this? He wasn't sure, but they really needed to do it more often.

Michi was on the very edge of release when You pulled back, so of course he whined in his frustration.

He had no idea how he had ended up on his hands and knees in the middle of the bed, but he also didn't care. Not as long as those hands were caressing him. A part of him wanted to just melt into the bedding, but at the same time he wanted more. He could feel the mattress shifting, the brush of a skirt hem against the backs of his thighs. He shivered and pressed back against his boyfriend. Being with You always felt good, but that skirt.... Michi shivered and tingled and whined, impatient for more.

You didn't keep him waiting for long. Michi couldn't hold in a low moan at the feel of You's cock slowly sliding into him, filing him to perfection.

“Anything you want, baby,” You promised, nipping at his ear. Michi shivered and moaned even more. He was suddenly very glad he had argued so hard for a schoolgirl cosplay.

You had long since become an early riser thanks to Gackt's nonsense, so it was only natural that he was already in the hotel dining room when Kazutake and Daisuke came down for breakfast. What was less usual was the discomfort that immediately appeared on both men's faces. At first he thought the two were going to change their minds about breakfast. And then Michi came up behind them, throwing his arms around their shoulders.

“Oh thank goodness! I woke up alone and for a minute I thought I'd overslept!”

“Like Niisan would let that happen,” Kazutake said, a sort of forced levity in his tone. “Right Niisan?”

“Still plenty of time for breakfast,” You agreed. “They should even have fresh coffee about now.”

“Ah, You-kun is the best!” Michi exclaimed as he took the seat across from him.

“Not like I actually did anything,” he said, shrugging.

Kazutake and Daisuke shared another look and again You got the feeling the two of them were about to bolt, though he couldn't fathom why.

“Mou, Kazu-kun, Dai-kun, come, sit! Eat! Breakfast is important! And so is coffee!”

“I, um, I'm not really that hungry,” Daisuke said, shifting backwards a couple of steps.

You tried to keep a straight face, but he couldn't help his curiosity at the strange behavior. It wasn't like the guitarist to say no to food. Ever. Was something wrong?

“Will you two get over here already?” Michi huffed, waving them over. “You know how much I hate eating alone. I always feel so awkward.”

“You-nii is right there,” Daisuke protested. “How could that possibly count as eating alone?”

“He's already had breakfast, so of course it still counts as eating alone!” Michi said, pouting even harder now.

“It's true,” You admitted, still watching their two bandmates. “I finished packing all my stuff, then came down here. I've been finished with breakfast for most of an hour now.”

“... and yet you're still sitting there,” Kazutake mumbled, finally relenting and taking a seat at their table.

“It was either sit here with coffee and a newspaper or sit in the lobby without the coffee and risk attracting too much attention,” You said with a shrug. “It's not like the hotel staff's had a problem with it. Anyway, this is usually how mornings go while we're touring. After so many years with Ga-kun's 5am mornings, do you have any idea how hard it is for me to sleep in anymore?”

“As late as you two were up, I'd've thought it'd be easy,” Daisuke muttered, taking a seat as well.

“You, uh, you were pretty, um, loud last night, Michi-kun,” Kazutake said and was he blushing?

“I, uh, I don't think we can do that cosplay anymore, Boss,” Daisuke added, pink dusting the man's cheekbones.

“We already aren't scheduled to anymore, but why not?” Michi asked.

From the way the other two were acting, You suspected he knew what was really going on with them. Intellectually, he supposed this was where someone who wasn't Gackt's soulmate, who hadn't spent the last two decades subjected to that man's sense of morality, would feel ashamed at being overhead while having sex. If anything, though, You almost felt proud that he had made Michi lose control that much. On the other hand....

“Does it bother you that much to know Michi-kun and I are actually together?” he asked, watching the other two men's faces. “That it's not just things he says for the sake of the fans?”

“What? No! No, of course not!” Kazutake immediately insisted.

“It's a little weird,” Daisuke interjected.

“But it's fine, it's fine!” Kazutake rushed to say, throwing a glare at his tour roommate. “If you and Michi-kun are happy together, that's the most important thing, absolutely. But, um, maybe ... uh, maybe quieter? Especially with the kinky stuff?”

“Oh Michi-kun's completely terrible at the Be Quiet game,” You said, pausing to sip his coffee. “But I suppose that's not an unreasonable request. I guess I'll have to go shopping later for some ball gags or something.”

For a moment, You almost felt guilty, watching the way Daisuke choked on nothing and Kazutake's face turned completely pink. But the only opinion that really mattered was Michi. And while his boyfriend looked embarrassed by the subject of conversation, he also looked ... intrigued. Another kink for them to explore, it seemed. Maybe he should be making a list of them? Something else he and Michi could discuss later, when it was just the two of them.