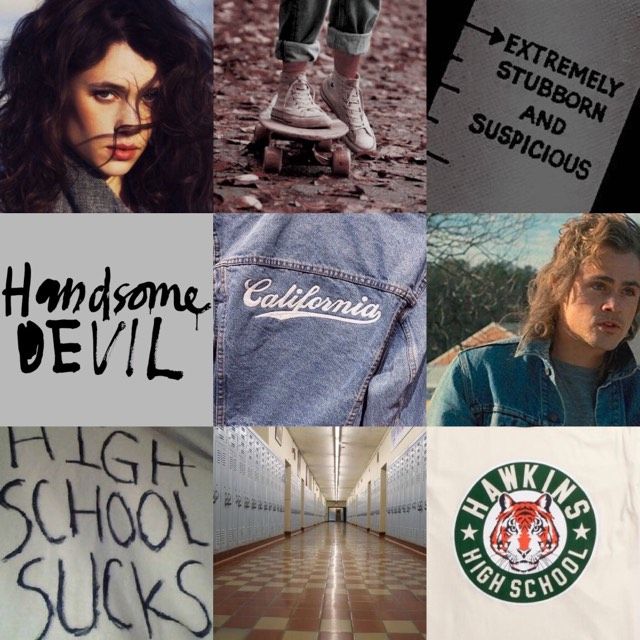 The night with Billy had been a one-time thing. She made that very clear the morning after; she wanted nothing else to do with him after the self-humiliation of getting drunk enough to have sex with the Hawkins Bad Boy.

He dropped her off and drove off. Since then she avoided him and went back to blending in with the rest of the student body. She went to band practice, did her school work, and stayed after school for the yearbook club meetings. Her mother had shown up in the middle of the night demanding to be taken care of, as she usually did whenever she came home. Quinn made sure she didn’t choke on her vomit and tucked her up in bed with water and pain meds on the stand next to the bed.

The following week, she set off for school on her skateboard. She had just reached the end of the street when Jonathan Byers sidled up in his car and offered her a ride.

She had been friends with the elder Byers boy since they were young kids. Both were new at the time; he had come to Hawkins after his parents spilt up, whereas Quinn arrived after her mother moved across town from their grandmother’s house. Both of them liked punk music and photography; they used to make home movies and did terrible photoshoots for the hell of it at the Byers house. Jonathan’s mother, Joyce, treated her like the daughter she never had and let her stay whenever her mom was too drunk. She had almost called the police when Quinn showed up with a busted lip and swollen cheek. Joyce was the woman Quinn wondered her mother could have been if she hadn’t had a drinking problem.

“You got your inhaler?” Jonathan asked as she checked her make up in the mirror. She took out the plastic case before having it tossed back in her purse.

“So how was the show?” He asked, changing the subject as they slowly pulled into the school parking lot.

This was the show he was supposed to have been at, but backed out last minute due to the tension between Steve and Nancy. He decided it was best to stay home with his brother. Quinn couldn’t be too upset with after everything that had happened (what he could legally tell her anyway) and being with family seemed to be the better option.

“Would have been better with you there, how was movie night with Will?”

“He fell asleep. The meds he’s on for everything makes him exhausted. I’m sorry about bailing last minute, I’m sure I would have gotten good photos of you guys playing. By the way, how was Hargrove?”

She lifted her head up and stared at him, “What about Hargrove?”

“Heard you left with him after your show, did something happen between you two?” He asked with a raised eyebrow.

“No nothing happened, he took me home and I went to bed,” she lied through her teeth, “He saying something else?”

“Well, while you skipped Monday he was saying he did more than just drop you off at home. But I figured he was lying about it because I know your taste in guys and he isn’t it.”

“Not everyone can be Nikki Sixx sadly,” she pouted, earning a laugh from him, “Nothing happened, Jonathan. Trust me, I know that guy is bad news and I don’t need to be a notch on his bed post.” She got out of the car seeing the familiar blue Camaro with California plates.

Jonathan was the only one allowed to call her Evie, her middle name, and this was only because Joyce thought Jonathan had a male friend name Quinn, and was confused when a girl turned up at the door.

She patted his shoulder. “Thank you, Jonathan but I promise nothing will ever happen between me and Billy-god-damn-Hargrove.”

“Cross your heart?” He teased as he got his books from the back.

“And wish to die,” she mocked back before taking off on her skateboard to the front of the school door and headed towards her locker.

She grabbed her books for the first few classes and looked up to see Billy leaning against the locker next to hers with a smug smile on his face. His hair was curlier than it was at the party. He smelled nice, the familiar scent of cologne he had on that night, dressed in dark blue jeans and a red button-up shirt with the buttons undone to his chest, showing the necklace he always had on. She had hoped to not run into him.

His tongue flicked against her clit, making her moan and grip the blankets under her. His blue eyes sparkled as they looked up at her. She trembled under him as his fingers dug into her thighs while his tongue continued to pick up speed; her eyes watered up as her stomach twisted into knots, wanting more. He pulled away when she was seconds from coming, making her whine like a child who didn’t get her way. He smirked, kissing her hips and dragged his mouth up to her breasts, flicking his tongue on her nipples. Goosebumps formed around her nipples and on her arms as he lined himself between her legs. She stared as he cupped her face in his hand, kissing her deep and roughly. She could feel his facial hair scratch her skin, and taste herself on his plump red lips. She gasped when he slipped inside her, tasting the alcohol on his breath as he breathed heavily.

“Bill-Billy…” She moaned looking at him “I-“

“You what Quinny? You want more?” He asked as his hips dipped deeper, “Tell me you want it,” he demanded as his fingers tangled in her hair and pulled hard.

“Quinny?” He waved a hand over her face making her stumble and blink.

“What is it, Hargrove?” She glared, holding her books. She then noticed the time. “I’m going to be late for class.”

He placed a hand on her hip, squeezing her side and causing her cheeks to flush. “Then let me escort you.”

She moved his hand off her. “I can walk myself, and I don’t need you spreading that little rumour of yours for attention… I’m sure Karen would love you to walk her to her class,” She motioned to the red haired girl she had seen Billy with a couple of times.

He scowled at the rejection of touch and put his hand back on her, leaning closer to her.

“What do you mean? It’s not a rumour. Had such a fun night, didn’t we? And if I wanted to walk Karen to class then I would be asking her, but I’m not asking her. She’s old news. I’m asking you.”

She didn’t want him asking her. She wanted him to go away and pretend nothing had ever happened between the two of them. She did not want rumours about her and him being something more than just a ride home from a party; she liked being invisible and no one barely knowing her name.

She closed her locker and started to walk away from Billy, but heard him behind her, the scent of his cologne following.

He really did not know when to give up or when a conversation was over.

“And I don’t want to be any news, it was one time only,” Quinn said. “One night of fun and now I’d like to return to my normal life without you saying stuff about it. I told you that night.”

She meant that. It was one time only and she wanted to continue the rest of her senior year without worrying about a relationship. The band had plans of moving to New York once her and Debbie, their drummer, graduated high school; Erik the guitarist, Holly the singer, and Connor the rhythm guitarist all were college students. They were two grades older than Debbie and her, but they let them play in the band. Hawkins would soon be a memory of bad childhood years and teenage angst as soon as they ran into the punk scene in New York. She couldn’t wait to forget the town and start a new life. She did not need any strings attached to the place, including Billy Hargrove trying to make her his girlfriend. One night of drunk sex and it was forgotten forever after.

“Are you that much of a prude or something? It was great sex,” He leaned over her. She felt his hand brush against her ass, giving it a squeeze, causing her to perk up in her walk, her face burning up. “Anyways, the game is next week and I was wondering-”

“I don’t go to sport games unless the yearbook tells me they need pictures,” she refused to give him the attention he wanted, “Now if you don’t mind, I really don’t need you to walk me to class. You have Auto all the way across, you’ll be late.”

He let out a chuckle, “That how it’s going to be then? Pretending like we don’t know each other?”

She turned to him as they stood outside of English class. “We never knew each other until that party and we still don’t know each other now. Nothing has changed.”

He leaned close to her face. She stared at his pink lips, watching his tongue flicker out, his mouth next to her ear as he his inhaled sharply. “Everything has changed, Quinn. We’ll know each other again soon,” he whispered darkly before pulling away and taking one of her books. “You can get this back after school.”

I am so sorry about not updating!!! My friend who is lovely enough to edit my chapters is back at Uni and took some time but I mean I already made it clear I wouldn't update as much till I have a few more chapters, I was gonna have Quinn be deaf but I changed my mind last minute! So I had to go through chapters 3-5 to get rid of that stuff. So my birthday was the 14th I'm now 25!!!! Coloured my hair and went shopping. Had plenty of drinks and junk food for my black heart soul. ANYWAY!!!! I wanted to thank everyone who gave kudos it made my day seeing those every time I really appreciate them. Feel free to comment too!!! or message me I'm always up checking messages lol LAST THING! Moodboard made by me and there is a playlist plus Pin board for the story :) MUCH LOVE!!!! xoxoxox