Artwork for World Champions by TheDefenestrator

At the end of season 4 of the Glory Pro Alliance, the government finally receives the information it has been waiting for: The other players have caught up.

In which Glory has been a government recruitment ploy for remote-piloted mecha operators all along.

(Includes an extra epilogue by Fenes!)

Many, many, many thanks are in order to Fenes for coming up with this idea in the first place! Gotta say, Space Odyssey was a little bit intimidating as a thing to draw but HERE WE ARE! I had an absolute blast working on this and am really glad that the mods made this QZGS Big Bang 2019 event to get us Lurkers to crawl out of our caves to Get Some Stuff Done.

This artwork is a teaser for what's in store in Fenes' fic's second half so make sure to check it out!

*It now has an extra epilogue by Fenes! 💛*

[Disclaimer: I used images from the internet for the graphics on the 3 hologram screens, the tablet, the console surface, and that little sphere on the left] 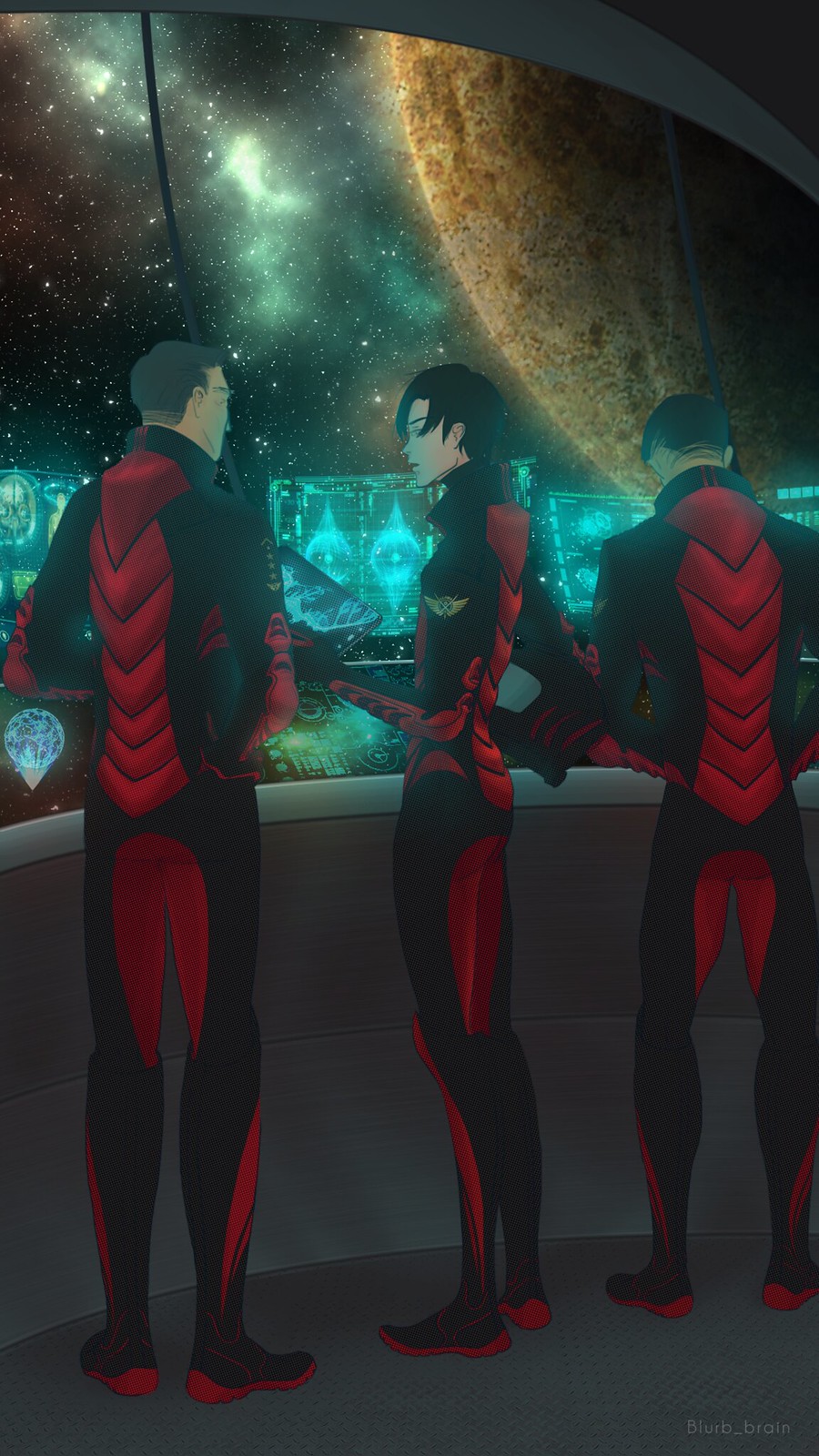 Centuries down the line, the PR coup that would save the planet and set Earth up to become the big name in intergalactic society they were today still drew a lot of attention, not least because of the perfectly preserved image of humanity’s first-contact group mid-planning available on file. Students and history buffs alike crowded close to point out details and gossip over the mission chronicler’s snapshot of the famous event, a meeting that elevated Earth from an underdeveloped nobody to a groundbreaking interstellar legend.

“Earth’s insignia! I heard the team leader chose it to make the players feel more comfortable, can you even believe? What a history to our international logo,” one student laughed.

“This was when General Ye Xiu was younger, right? Before he took over intergalactic relations?” Another leaned in, heart full of gossip. “I heard he used to be like, spec ops or something. I heard even this was a covert mission at the time, can you imagine not even knowing about aliens? ‘Back-country hicks’ is right…”

“Check out how suits used to look! Mm, I do love a man in uniform,” a different bunch giggled.

“You can't beat period costume, really, just look at that…”

“Oh, isn’t that that one group’s home planet in the background? Back when the organizing council of the tournament was like, super corrupt… Earth, the Infhillte, and that one other group ended up taking over majority shares with the support of the Jellaxions and a few others, right?”

“Is that supposed to be a correction? It’s not even a name!”

“What, do you speak their language?” Rolled eyes. “That’s what Earth calls them, okay, they don’t mind.”

“Look, I think those are the Greys on that back screen!”

“And the Dracomuirs on the pad he’s holding, wow, they really did plan out the whole matchup to get everyone hype? That’s so gutsy, putting themselves in a position to lose…”

“Actually, I heard in some reports that wasn’t the plan, they just had a hard time.”

“Earth’s team? Having a hard time with the Dracomuirs? No way, I can’t even imagine…”

It was such an obvious moment, the major players caught mid-motion, practically alive on the screen, detail upon detail proving that lines about Earth taking intergalactic society by storm and helping to redefine inter-species relations were not just words on the page, but real events in someone’s life, lived by real people in real places. That the renowned leaders in history books were once young, practically children by current society’s standards; that they’d worn old-fashioned suits like they were born to them, set the future by what would let them survive the present, chose Earth’s famous insignia on a whim, to settle oh-so-human hearts.

It was a connection, from then to now—a reminder that above all else, these people had been truly, unendingly, heart-achingly real. They lived and breathed like anyone now lived and breathed, for all that time would continue to pass ever after, too.

Just another moment in what would be history.