Casey runs into the woods.

Then she has a very brief encounter with a stranger. 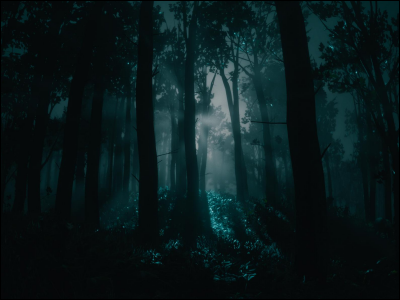 Barry swims in and out of the Light again, hearing Dennis and Joseph talking about the fire in the cellar. He's alarmed for a moment; what fire? Where is he?

"I'm not going to stop him," Dennis says out loud, and there's a pause before he says, "We need to take her somewhere safe."

There's a sensation as though they are running, and Barry peers out to the Light a bit but recoils; The Beast is there, sharing it with Dennis--he could feel the raw power emanating from the Light as he neared it.

"Stop talking," Dennis pants as they run. "I'm not doing any of this if it's going to put her in any danger."

Stop talking? Who? Barry certainly isn't saying anything, and he doubts The Beast is much of a conversationalist, but before he can investigate he is pulled back into the darkness to slumber.

There's a big bang, like some kind of explosion; then the sound of windows breaking downstairs. Casey jerks awake, senses in overdrive, and beside her Dennis is already on his feet, tossing her backpack to her. She has no idea what's happening but she does know that they need to get out, and quickly. She shimmies into her pants and slips her feet into her shoes while looking at Dennis, who is grabbing his backpack and stuffing his own shoes into it.

There's smoke wafting up from the living area, and the thunder of many feet running through the house; Dennis has been panting this entire time, dark veins popping up against his flesh, body trembling in agony as he continues to grab the things he needs while simultaneously readying his body for The Beast. The sight is fascinating, and if Casey had a moment, she would watch, but as it is she's coughing through what she assumes are smoke grenades.

Dennis runs and grabs a chair in the corner of the loft, throwing it against the delicate floor to ceiling stained glass window to his left. It smashes through without effort, and the entire window crumbles. Without pausing, he grabs Casey, about to hoist her through the opening when she scrambles to first snatch the Hotwheels and stuff them into her pockets. In a heartbeat she is flying through the air with both of their backpacks hugged to her chest, and then falling onto a painful gathering of bushes that scrape her arms up and poke through her clothing.

No permanent damage, though one of her arms is bleeding. She hops out of the bushes, putting her backpack on, slinging his onto one shoulder. Then she begins to run for the line of trees that mark the beginning of the woods.

Then the trees are surrounding her, and she sees flashlights bobbing up and down but doesn't see Dennis at all. Something in her gut is pulling her to the left, and she follows it, dipping under branches and scrambling past above-ground roots. She hears dogs barking, and then dogs squealing, and people screaming. The sound of flesh pounding against flesh rings through the night; It feels as though she's in some sort of horror movie set.

The only thing she can assume at this point is that they were spotted and traced back to the Abington house. It was foolish of her to think there may be some sort of respite from the real world there, but the atmosphere in that house was certainly an appealing one; it felt like they were in their own little world there, free, separate from all other things.

There is another scream, and then some gunshots, and Casey keeps running, letting her instincts lead the way. There are more gunshots, then she hears The Beast roaring--it's somewhere behind her, to the left. The night is lit up with gunfire.

Oh god, she thinks. Please let Them be okay.

He seems to be distracting all of their attention away from her, and while one part of her is relieved, the other part of her fears he'll get seriously hurt--surely The Beast can only take or dodge so many bullets all at once? Surely if he were to get badly injured, this--this connection, between them, it would let her know?

She takes a deep breath through her nostrils and it's almost as though she can see a line of the correct smells, wafting through the woods. Her gut tells her to veer left again, and she does. She doesn't have time right now to wonder what's happening with her, or to logic it away. After a while of following this strange compass, the noises grow quieter and more distant.

There's a lone dog barking in the distance but that, too, is gruesomely cut short. Casey slows, looking over her shoulder. She can't see anyone following her, or even any lights bobbing her way, so she stops, grabbing the straps on her backpack. It becomes eerily quiet, and she can no longer hear the rustling of people running through the woods, or people calling to others for backup. She stays where she is for a moment, afraid of what she'll find if she goes back.

It's her, and the eerie quiet of the woods.

What if...something happened to him? What if he needs her, what if he's suffering and he needs someone to pull him to safety somewhere? What if, instead of The Beast...what if it's Barry, or Dennis, or...

Her hand goes to her pocket and she squeezes the Hotwheels there.

Her heart is aching with not knowing. She has to go back. She has to be sure that they are okay.

Before she's even able to take a step, she hears a noise in the branches above her. The Beast hangs from a tree limb and drops down in a crouch, and as he slowly stands in front of her she is again blown away by how massive he is compared to the Others. The flexing of the muscles underneath his skin is like magma underneath a fire of flesh.

A splash of what seem to be bullet wounds spray from beneath the right side of his chest up to his left shoulder, and her hand comes out to touch one of them--it is bleeding, but otherwise superficial. She keeps her fingers there and looks up at him; he is breathing deeply, and she is suddenly very aware that he may be collecting her scent as they stand here.

"Is Everyone...okay?" she asks haltingly.

He takes a couple more deep breaths before speaking. "We are...safe. We are...unwounded. They are...not."

A chill goes down her back and she begins to take her hand away from him, but he catches her arm before she does. The movement is quick and catches her off guard, so she gasps involuntarily. His hand on her arm is firm, and as she looks at it, she can see that the same dark veins line the backs of his hands, and that they end in thick, pointed nails. She sees blood on those nails. She is about to pull away in fear but suddenly she realizes that the blood on his nails is her blood, and that there are streaks of it going down her arm.

She forgot for a moment that she'd been injured on the fall down.

For a second she thinks he's going to lick the blood off of her arm, but instead he drops it and leans forward very suddenly, his mouth by her right ear, breathing her in deeply again to retain her scent. When he exhales against her, she shivers and begins to tremble.

He takes a step back and closes his eyes, then his body heaves, and he stumbles against a tree, forearm coming up against it to support him. She just stands and watches the detransformation, and is mystified by it. The veins slowly recede, disappearing into his flesh; his muscles slacken and reduce in size. His hands are trembling, and they begin to reform into normal, claw-less fingers. He slumps against the tree as his mass dwindles a bit, and has his back towards her--his once marble-like back now beautifully soft against the stark lines of the woods. He's panting, but it grows shallower, more man-like than beast-like.

He leans against that tree for a moment as though that's all that's holding him to this life, and Casey notices he's only wearing his sweats. His feet are a dirty mess and she needs to see what state they are in later, but for now, she opens up his backpack and retrieves his shoes. She low-key wishes it's Kevin that's emerged, even has his name on the tip of her tongue, but she decides that saying it again would be wrong and it should be reserved for when she really needs it.

She takes a blanket out of her own backpack and approaches him slowly, and once he's sliding down the length of the tree she drapes it over his shoulders in an attempt to keep him warm until he's ready to put a shirt on.

Suddenly he's chuckling, a low and humorless sound, and as he takes the blanket and closes it around himself, he glances up at her with a sly smirk. "Well look at you, playing keen and domestic." The words come out of his mouth with light Scottish undertones, and Casey is taken aback. She hasn't met anyone with that type of accent in Kevin's head. "It's a right shame you've got such a bonnie face."

"Who are you?" she asks quietly.

He's looking up at her, and he gives her a wink, putting his finger to his mouth in secrecy. A chill runs through her body, but as easily as he came, he goes, and then it's Barry she's looking at, and he looks exhausted.

"Hey baby girl," he says, smiling at her. "You got a shirt for me?" She stares at him for a second and then realizes he asked her a question, and she digs in his backpack for one for him.

Once he's settled with clothes, she checks his feet and is relieved to see they're dirty but otherwise uninjured. He puts his shoes on, they clean off her arm with a bottle of water, and then they're walking through the forest towards a neighborhood where Barry knows there's a car that's always left with its keys in the glove compartment. They're going to have to skip town and then find somewhere to spend some time figuring out a game plan for themselves.

Barry reaches out and links his fingers with Casey's as they walk, and honestly despite everything that's been happening lately, it feels like he's coming home.

Wonder if this means Casey and Barry are A Thing again. Or were they even A Thing to begin with? idk I'm no love expert.

Also, who is winking at her? Dennis gon' be mad.