When The Sparrows Sing

Alright, you wonderful people. This is it! Thanks to everyone who has been here since the beginning if this batshit crazy posting schedule. And for everyone who will stumble across this fic later, you're also amazing. Thanks for toughing it out!

I'll keep you guys updated on new stories as they become available for posting. As always, I do not post unfinished works. The pressure is too intense, I clam up, and I drop the fic for months when I get writers block.

So please be patient - new stories are ALWAYS in the works! I won't tease you with any now because I don't have any that are completed enough to be worthy of teasers.

And can we get a round of applause for my wonderful beta, LadyCleganeofTheNorth! I'm fairly certain this fic was like chewing shards of glass - not pretty, but there are those select few who can stomach it. She's one tough lady.

So again, I'm on tumblr (Hollandoodle), Instagram (Hollandoodle), and of course here (oh look at that - Hollandoodle!) And while I can't promise I'm very active on any of those platforms, I'm at least present.

All around the shimmering table sat gods of every bearing, every size, and the scenes unfolding before them through the round surface warmed the heart of every last one of them. The maiden sat slightly closer to the smith than was necessary, their entwined fingers beneath the table seen by no one but known by everyone.

The Stranger watched beneath his darkened hood with rapt attention, as did the Warrior who stood beside him. They were fond of the man in the image, and were happy he had finally found happiness.

The Crone and the Mother were both joyful over what was transpiring before them – the scenes blending together and yet separate at the same time, showing various stages of the relationship that had been formed in one century, but that endured into another, and that was already planned to reappear in centuries to come.

And through it all the father nodded sagely, approving of the Smith’s handiwork as they watched the sparrows, the extension of the smith’s hands, do their work amidst the two humans who worked together to create a life in Westeros.

As they watched, the tiny, shimmering shapes led the couple on a house hunt to a decently sized cabin on the outskirts of the city, not too far from the castle where they could visit the woman’s family but also not too great a distance where either of them would have to find new employment. The house sported a handful of bedrooms for the children only the gods knew were to come.

The sparrows, too, knew of this; since the Smith had used them as his guides.

The scene faded and another arose in its place, this time a sparrow in a clothing boutique filled with white dresses of every shape and size.

But the sparrow led the red headed woman to one nearly hidden in the corner, the tiny bird feet alighting on the hanger a moment before the woman pulled it out and smiled.

Then the next scene was of the same sparrow – or perhaps a different one? Even the Smith couldn’t be too certain – flitting about the tall man’s ears; first the scarred one and then the unscarred one, as the woman appeared at the end of the aisle. On the arm of her father, she wore the dove gray gown, and collectively the group of celestial beings felt the poignant twisting of their hearts as the sensation of tears flowed down their faces.

For the man below was crying while making no attempt to hide it, other than to keep his face straight. But the woman saw, and the gods felt the same twisting of her heart as her soul reached out to his in comfort.

The last scene, shown to them by the Smith before the group mutually agreed they had seen enough, was of a child in a dark blue stroller – an infant, really, with dark brown curls, a pink bow in her hair, and the bluest of blue eyes. The Maiden, despite knowing this would be, gasped audibly and squeezed the Smith’s hand.

“Perfect,” she murmured, as a row of a handful of sparrows landed on the pram’s edge to survey their handiwork, as the man and woman looked on with smiles from where they sat together on the picnic blanket. Soft music played from a phone resting beside the man’s leg, the singer singing slowly, “ When somebody loves you it's easy to get through; When somebody loves you the way I love you .”

With her belly round with child, and his arm protectively wound around her back in support, they watched as a single sparrow hopped into the pram and onto the sleepy baby’s chest.

A soft gurgle of delight erupted from the baby’s mouth amidst spit bubbles. But the bird didn’t move, and instead looked down at the child with its cocked head as the child looked at it.

“We are here for you,” the gods heard, the ethereal voice floating from the sparrow and into the infant’s ears, as they had known would happen – the start of a lifelong love affair between the tiny animal and the gurgling, giggling, one year old creature they would from that point watch over.

“She sees them,” said the woman, awe coloring her voice as she absently pressed the man’s other hand to her softly rounded belly.

“Aye,” he said in response, a slight smile splitting his scarred face. He looked down at her with love in his eyes and she leaned up to kiss him, the scene so full of love and hope that it was beyond the Smith’s ability to deny himself the squeeze he gave to the Maiden’s hand.

The woman gasped suddenly, and both of them looked down at where their hands were joined.

“Feel your son, Sandor,” she whispered, awe in her voice and on his face. And together they looked up to watch the sparrows all fly away – though not too far.

The gods were never very far away.

Oh, and for your viewing pleasure, 14-month-old Baby Doodle ❤ 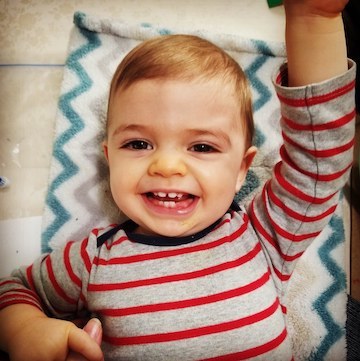