Shoveling The Way Through

Usually, Loki has no problems fighting off an army of humans on his own. But with his magic bound, even he is willing to admit that all these humans and their bullets could be a little bit... problematic. (Loki, please give your husband a break.)

I (Midnight) don't write Dumbass Loki often, but I think this is a good example. The amazing art of said dumbass is by Rabentochter and I love it. We hope you like it, Lou! ❤❤❤

Loki honestly didn’t know what it was about these humans. They were scattered all over the continent, probably even the whole planet, their organisation was in shambles, none of their plans ever worked in the long haul - and somehow they still hadn’t given up their dream of being a tremendous nuisance.

He raised a brow at the man who was currently “interrogating” him. The man was being very stupid, but Loki didn’t plan on pointing it out to him anytime soon. They really thought that they had managed to capture him, didn’t they? Somehow, they hadn’t realized yet that Loki had all but strolled into their hideout, making just enough noise to let them notice him. The only reason Loki was still here was that Hydra still had some artifacts that were worth hunting after. Well, at least in theory. Right now, Loki began doubting that, because nothing could be worth listening to that idiot’s rambling for another two hours. No, Loki planned on being out of here in - let's say half an hour, yes? At the latest.

Fine, so the shackles might be a bit of a problem. Loki had no idea how Hydra had gotten their hands on magical chains; that had been the very last thing he'd expected. So he had let them shackle him. He was willing to admit that that might have been a little bit stupid. At least to himself; he would tell everybody else that this had been his plan from the start. Actually, the best option was eliminating everyone who knew about this.

He would start with his interrogator.

Ten minutes later, the human had collapsed in one corner of the room. Loki still stood in the middle of it, trying to get his hair out of his face with his shackled hands.

The building was filled to the brim with humans. Usually, that wouldn't be a problem, but with chains that kept him from using his seidr? Just wonderful, really. Loki could imagine better ways to spent his evening than using only kicks and blows to fight his way out. Oh, he was a very good at hand-to-hand combat, that wasn't it - but it was so annoying.

“Well then,” Loki said to the wheezing human who was not dead (yet), “let's get it over with, shall we?”

Loki did not get it over with.

As it turned out, all those humans and their bullets were a tiny bit… much. Still manageable, mind you, Loki wasn't going to get himself killed by Hydra agents because, no. That would be embarrassing on so many levels. But after an hour, he was experiencing some vague difficulties. There was a bullet somewhere in his stomach, for one thing. His thigh had been grazed by one as well. And even though the wounds were already healing, they were still hurting, especially because he couldn't speed up the process with magic. He'd also lost two of the three daggers he kept on his body rather than in a pocket dimension by throwing them around.

At least he had made it outside by now, but being in some kind of inner courtyard wasn't any better than being inside the building as long as there were still a few dozen agents to deal with.

He needed a break. Just a few seconds would do.

He allowed one of his opponents to kick him against the nearest wall and then held up a finger. The three agents across from him were so surprised that they actually refrained from pouncing at him for a few seconds.

“You should know,” Loki told them, a little out of breath, “that you brought this upon yourselves. I did not plan to kill you all when I came here.”

The humans were not interested in listening to him, apparently. It was very rude of them.

The good thing about being in a courtyard? They seemed to use it as a deposit for all kinds of things. And while a shovel wasn't the first weapon Loki would have chosen, it was still better than nothing. And the cracking sound of one of the rude agent's skull was very satisfying. 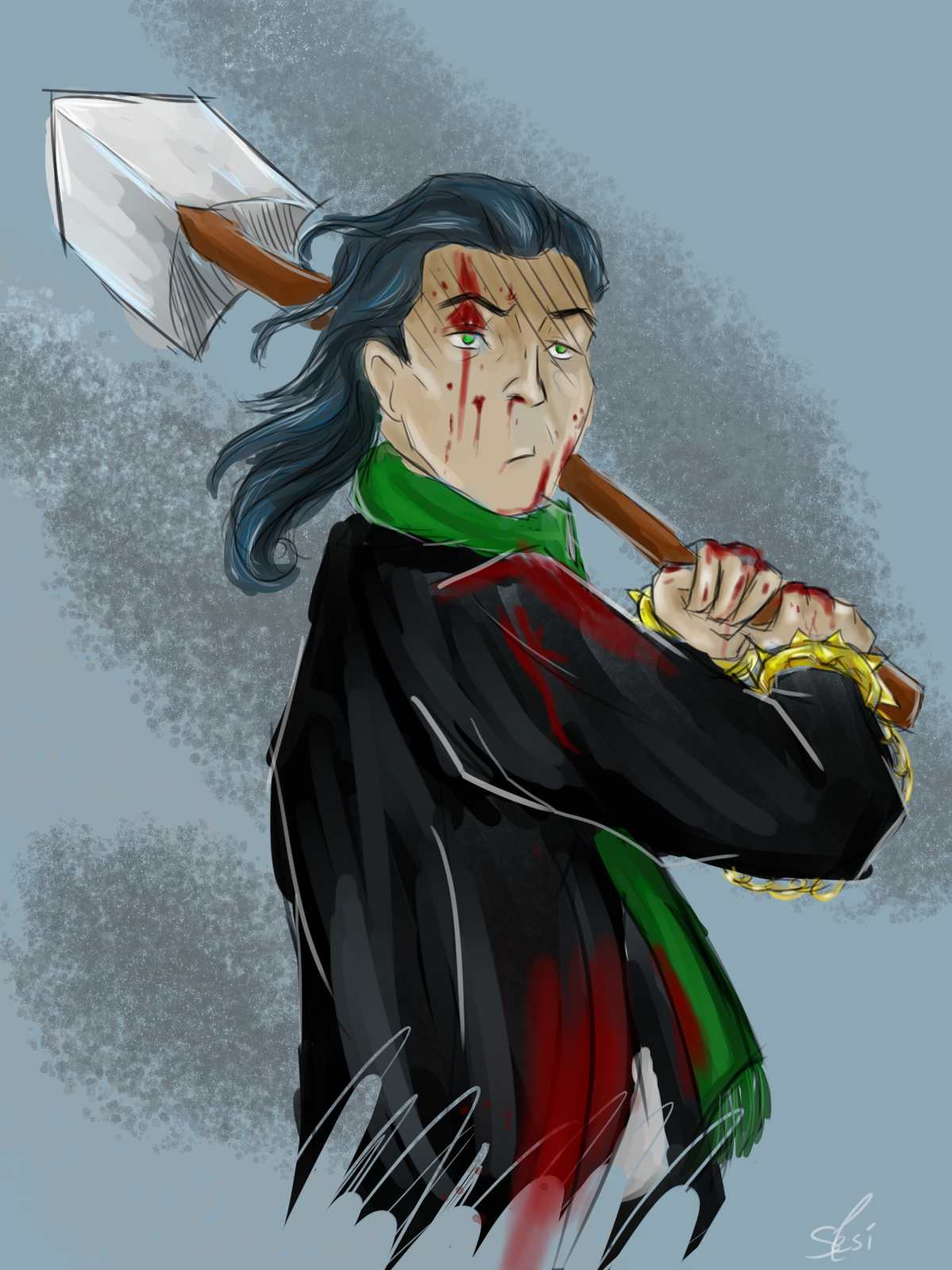 Sadly, Loki lost the shovel just a few seconds later. He really needed to stop tossing his weapons away when he couldn't call them back with magic. Now, standing in the middle of the courtyard surrounded by humans and with another bullet wound in his shoulder, Loki began thinking that maybe he should have just gone straight to the restaurant, anniversary gifts be damned.

The agents hadn't attacked him yet. They probably thought he was about to give up.

“What?” He asked them, balancing his last dagger between his shackled hands. “Would you like a handwritten invitation?”

Now they attacked him.

Or well, they wanted to. When the first human would have reached him, Loki wasn't there anymore.

Admittedly, he was a little surprised himself. He might have yelped. Quietly. But, to be fair, it wasn't every day that he found himself being picked up from the floor and carried through the air and then finally dropped onto a roof by his -

“I was not done yet!” Loki snapped. The impact had knocked the breath out of his lungs, but he still managed to efficiently glare up at Tony.

Tony landed on the roof next to Loki, faceplate sliding up. “You pronounced thank you wrong.”

“I had everything under -”

“Yeah, hold that thought,” Tony interrupted, and the look in his eyes was scared enough that Loki actually shut up. “God, Loki - okay, wait -” He reached out and used a laser to get Loki out of the shackles. Then the faceplate already slid down again. “I'll be back in a minute, okay? Don't you dare move!”

And he plummeted off the roof again to take care of the Hydra agents Loki hadn't yet made shashlik of.

Loki rolled his eyes and let himself fall on his back, hands already searching out his stomach wound. Having access to his seidr again was bliss, and he needed just seconds to coax the bullet out of his body. He would be fine in an hour or so; for now he would just take a few minutes to catch his breath.

Tony returned to him very quickly. Loki could hear the tell-tale sounds of repulsors being fired off, so there were also other Iron Man suits at the works. Tony immediately fell to his knees next to Loki and took off his helmet completely now.

Tony blinked. Then raised his brows, gesturing at Loki and back at the Hydra agents in the courtyard. “Are you telling me that you almost got yourself killed to -”

Loki considered that for a moment. “Well,” he said then.

“You had a bullet in your stomach ,” Tony informed him, as if Loki hadn't noticed that himself. Tony even poked Loki's stomach with his metal finger, which -

“Serves you right,” Tony snapped, then bent down to pull Loki against his chest.

Loki winced slightly in pain, but decided to indulge his lover. He couldn't quite keep a relieved sigh from slipping out, either.

“I'll throw you off the roof,” Tony replied, still grumpy, but proved his words to be a lie by clutching Loki even tighter. “You let them shackle you.”

“You're so fucking stupid sometimes. I love you.”

Tony pulled back, eyes flickering over Loki's body in concern. “You're sure you'll be fine?”

“Shut up. And wait here for me. And then we're going to dinner.”

Loki sighed and nodded. Tony put on his helmet again, muttering something about being married to the “God of Idiocy and Death Wishes,” then flew off to find the precious metal.

Loki stayed on the roof, thinking that any other way to spend their anniversary would have been absolutely boring.

You can find the art on tumblr, too!