Request me some kleinphy fic ideas because the fandom needs more! I can write mild smut but nothing super kinky or hardcore. I also usually write Connor as a bottom and Jared as a top. (But I can write them switching if anyone wants that) Other than that you can request anything! I’m adding treebros because I want to write and no one is requesting anything, so same rules apply as for the kleinphy requests (I still firmly believe that Connor can only bottom, but if you want a first time on top fic I can work with that) You can also request fluff and angst (I’ll probably be much better at writing these)

Here’s some ideas if any needs any for what to request. Make sure you read the first chapter before making a request. You can write the number you want, the ship you want, and more information about what you want the story to be about if you want to. 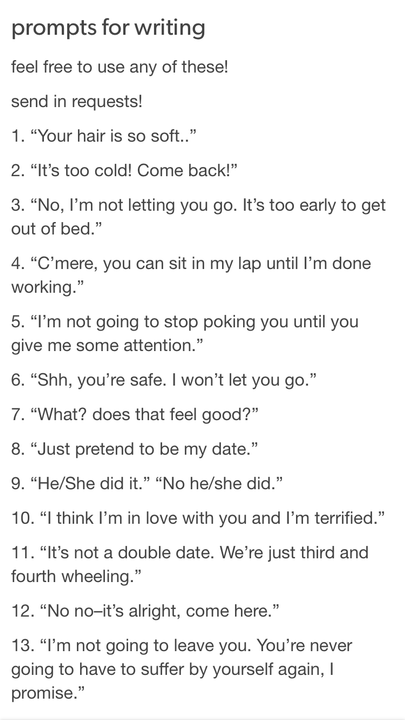 “I think I’m in love with you and I’m terrified.”

Connor and Jared has been unofficially seeing each other for the past two months. The two boys went on many dates together and enjoyed their time being more than friends but less than boyfriends. Neither of them knew how to talk about their feelings about the other, so they were both too scared to open up and ask the big question about taking their relationship to the next level and becoming official.

This is why Jared was so confused when Connor blocked his number out of the blue. He had no other way of reaching Connor (because Connor refused to get social media claiming, “The internet is a waste of what little time we have on this earth, Kleinman. Read a book.”) He didn’t think that anything terrible had happened between them. The last time he saw Connor was Friday night (it was now Sunday afternoon) and the two had shared a beautiful day together at some old abandoned orchard Connor wanted to go to for some reason. But Jared played along for Connor’s sake and had had such a great time that he had even worked up the courage to kiss Connor when they were watching the sunset together from a tree branch.

He knew he was a dick, but he didn’t think he’d down anything dickish recently. He once more racked his brain, trying to think of something that could’ve sent Connor off the edge. Again he came up with absolutely nothing, so he decided to DM Zoe Murphy on Instagram (who probably had no idea who he was or how he was related to Connor) about what to do.

J.Kleinman: hey zoe whats up with your freaky brother

Nice, Kleinman. He thought to himself. No wonder he blocked you, you’re still a dick who has to resort to bullying to get out of awkward situations.

ZoeMurphhh: why are you dming me about my brother????

J.Kleinman: hes my friend and he blocked my number

ZoeMurphhh: probably because you always call him a freak :/

J.Kleinman: can you please just ask your fucking brother why he blocked me

ZoeMurphhh: only if you give me evans number

ZoeMurphhh: he said he doesn’t know want to talk to you

J.Kleinman: tell him im coming over

“Dude, you don’t even have a lock on this door, I’ll give you ten seconds to open it before I come in.”

No response, so Jared opened the door to reveal a pitiful lump of blankets on the bed, with chocolate brown curls peeking out from beneath it. Jared sighed and sat next to Connor’s unmoving form on the bed.

“Do you want to tell me what’s going on? Or am I going to have to force it out of you?” Once again Jared received no response, so he yanked the covers from Connor’s body.

Connor lay curled up in a ball, tears staining his cheeks, t-shirt riding up against his stomach, and boxers lying loosely on his hips. He looked up at Jared and said two simple words. “Go away.”

“Connor, please, I know we usually just make fun of each other and flirt through our insults, but I really do care about you and want to know what I did wrong so I can fix it.” Jared pleaded, fiddling with the bottom on his t-shirt.

Connor sat up and mumbled something under his breath.

“What was that?” Jared said softly.

In a moment of courage, Jared hooked his finger under Connor’s chin and forced their eyes to meet. “Speak up, I can’t hear you.”

Connor’s bloodshot eyes met Jared’s blue ones and he sighed. “It’s not you...it’s just…” Connor’s voice trailed off and he looked down again. Jared grabbed his hand and squeezed it tightly, encouraging the other boy to go on.

“I think I’m in love with you and I’m terrified.”

Jared paused for a second to think over his response. “I’m scared, too. Love kinda sucks.”

Connor laughed through his tears and punched Jared’s arm. “You kinda suck.” He replied snarkily.

“I’d only suck you, my dear.” Jared quipped.

Connor let out a squawk mixed with a laugh as he hid his blushing face in Jared’s shoulder. The pair giggled together for a few more minutes before they fell into a comfortable silence.

“Of fucking course I do.”

“Maybe? What the fuck, Jared?”

“Well, it’s kind of an honor to date such an amazing person like me, so I had to make sure you were ready for such a big uptaking? Do you think you can handle me?” He wiggled his eyebrows suggestively.

“I think I can handle you just fine, Kleinman.”

“But can you handle this dic-“

Connor promptly shut Jared up with sweet kiss to the lips. “Shut the fuck up and kiss me dickhead.” He breathed against Jared lips.