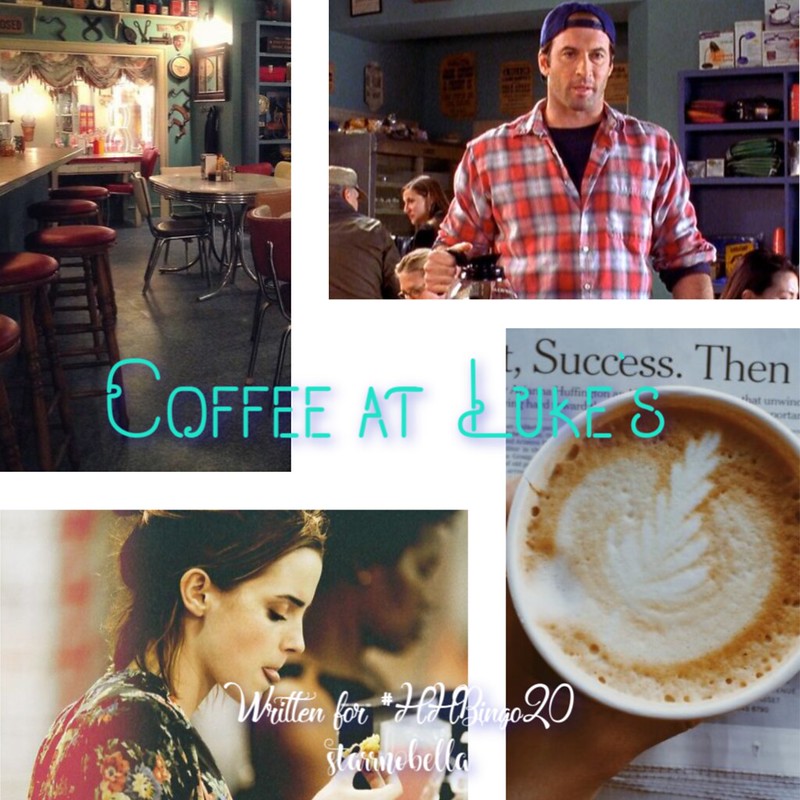 When Hermione found out she was moving from London to Connecticut, her boss's fiancee was able to give her some tips about the town she was about to call home and where to get the best coffee with a show. COMPLETE

A/N: This was written for Hermione's Haven during #HHBingo20. This story filled square G5 - Luke Danes. I've dabbled in the Harry Potter/Gilmore Girls crossover world, but never with Luke so this story was an interesting challenge for me. I had a lot of fun writing it and I hope you enjoy reading!

Beta work was done by Grammarly and the only thing I own in this little tale is the plot.

Be sure to let me know what you think!

"Stars Hollow," Hermione mumbled to herself as she made her way down the sidewalk. It had a nice ring to it, and so far, everyone she had talked to had been friendly. It was very apparent to her that this town was a tight-knit community, and everyone was watching her closely as she got settled in.

Every so often as she would walk by a small group of townspeople, she would hear them start to mumble. Of course, she knew they were talking about her, but that didn't stop Hermione from carrying on her way.

Reaching into her pocket, Hermione pulled out a small scrap of paper that Rory had given her before she left London. It was a list of places to eat in Stars Hollow with Rory's best of the best items from their menu that came with her full recommendations. Eager to check out some of Rory's favorite places, Hermione had decided that coffee was the most important way to start her day, and according to the list, there was only one place in town with the best coffee.

A smile beamed proudly from Hermione's face as she rounded the corner and spotted the sign for the diner across the town center. Cutting across the street, she walked past the gazebo, where she spotted two gentlemen standing under the gazebo arguing about the decorations for an upcoming festival.

"Kirk, how many times do I have to tell you, the lights have to be strung from the street lamps into the gazebo, not to the other street lights?"

The man complaining was named Taylor, and supposedly he was someone important to Stars Hollow. Hermione was still learning the names of the townspeople, but luckily, Rory had given her some tips on how to fit in.

Hermione slipped her mobile out of her pocket and sent a message off to Rory. It was late afternoon in London, so Rory should have been getting ready to leave the office for the day and could probably use a good laugh. She typed off her message and slid the device back into her pocket as she reached the front steps of Luke's Diner.

Just as she reached for the door, it opened, allowing another patron to exit, and Hermione slipped inside. She made her way to the counter saw a man in a ball cap standing behind the counter. His demeanor seemed grumpy, but from the looks of things, it was because the diner was so busy, and he might not be a people person. A bit odd for a diner owner, Hermione thought to herself as she took a seat at the counter.

"What can I get ya?" the man behind the counter grumbling, scribbling something on a notepad in his hand before glancing up. As he lifted his gaze, he furrowed his brow momentarily. "Do I know you?"

"I don't think so," Hermione replied. "I'm new in town. Hermione Granger." She extended her hand to him, which he took cautiously and shook it briefly. "And you are?"

"Luke," he said, pulling his hand away. "You're that woman from London. Rory's friend, right?"

Hermione nodded her head, furiously. "The very same. I was told that Luke's had the best coffee in town."

Luke smiled softly. "One cup of coffee coming right up. You don't drink as much coffee as Rory and Lorelai do, do you?"

She snickered and hung her head as she slowly nodded. "Unfortunately, I do. It's the only way I can keep going at such a busy pace."

Luke rolled his eyes as he placed an empty coffee mug in front of her and filled it with coffee. "Take it easy with this stuff. It's strong for first-timers."

"I'll take my chances," Hermione snickered, wrapping her hands around the mug and lifting it to her lips. She inhaled the delicious aroma and smiled before taking a sip. It was everything Rory had promised and more. She could definitely see this becoming her usual morning coffee spot.

Just as she was about to thank Luke for the coffee, she felt a cool breeze against her back as the door opened. Hermione's eyes followed Luke as he went to greet the newest visitor to the diner. She turned around to be able to see the whole show.

"What do you want, Taylor?" Luke grumbled, setting his notepad down on the counter and making his way around the counter.

"I wanted to see if you've started putting your Founders' Firelight Festival decorations up yet," Taylor replied innocently, glancing around the diner. He frowned when he didn't see any of the decorations.

"I told you, I'm not putting any decorations up," Luke said. "I never have, and I never will. My dad didn't put any of your silly decorations up when the diner was a hardware store, either."

"But, Luke, the diner is in the center of town, and everyone else is decorating," Taylor insisted. "Just one autumn wreath."

"Get out of here, Taylor. I'm warning you," Luke stated, crossing his arms over his chest as he took a step towards Taylor.

Taylor slowly took a step back toward the door and held his hands up, stopping Luke in his tracks. "Fine, I'm going. But you might want to reconsider the decorations. Just think of what the founding fathers of Stars Hollow would say not to see any decorations in honor of the festival."

"I'm pretty sure they'd tell you to get the hell out," Luke grumbled, leading Taylor out the front door and pulling it shut behind him. He shook his head as he returned to the counter.

Hermione couldn't help laughing at the whole show that played out in front of her just now. Rory was right. Luke's was the best coffee in town with the best entertainment, no matter what time of day you stop by.

Coffee at Luke's was going to become a permanent place in her routine as she got settled into life in Stars Hollow. She couldn't wait to see where this new adventure would lead.