The kiss that changed everything

Buck is at a bar with Eddie, both of them single and just drinking away their feelings on Valentine’s Day. They both hate the stupid romantic holiday. To keep girls off their backs and stop them from flirting, Buck and Eddie pretend to be boyfriends, basically fake dating. Everything is fine until a girl puts her hand on Buck’s crotch, which makes Eddie jealous enough to kiss Buck. That one kiss changes everything. 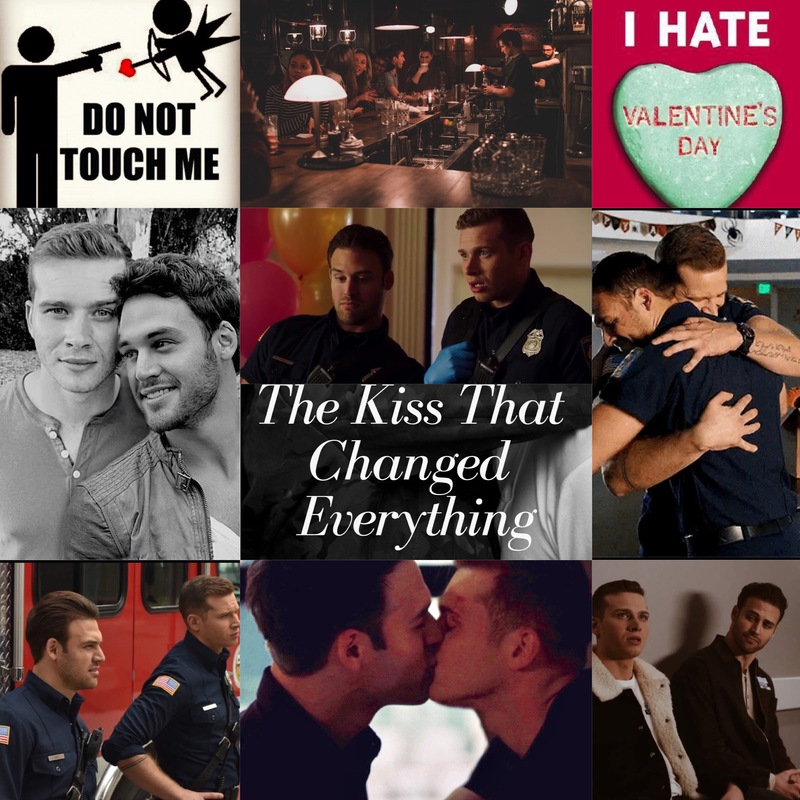 Buck and Eddie both knew that sitting at home on such a romantic holiday, was useless and very well pathetic. That was how Eddie’s tia ended up staying with Chris while Eddie and Buck headed to a local bar. It would keep their minds off of being single and they could have some fun at the same time. Plus why did the holiday have to be just about romance? Why couldn't it also be about friends who loved and cared about each other?

“Hey baby, you’re sure sexy.” A girl said to Buck as she ran her hand down his arm. “How is someone like you single on Valentine’s Day?”

“Yes I know he is sexy because I’m his boyfriend.” Eddie spoke. “So he’s not single, back off,” he muttered, putting his arm over Buck’s shoulders.

The girl huffed and walked off in a hurry. Sure Buck and Eddie both didn’t enjoy being single but they also did not want a bunch of random girls all over them looking for a one night stand. Thus their tipsy alcohol filled brains thought it would be a good idea to fake date for the night.

“Dude, thank you. That girl was not even my type.”

“What is your type anyways?” Eddie asked.

“Well it’s not what it used to be because my type used to be everyone willing to have sex with me. Now I’m more attracted to dark features like dark hair but I like light eyes, hazel, blue, green. I like tall too, since I’m really tall but they still have to be shorter than me.” Buck told him. “They also have to be sweet, funny as hell, and awesome with kids.”

Eddie gulped down the rest of his beer as he listened to Buck basically describing him. Of course Eddie knew that it wasn’t possible, that Buck was only describing the type of girls he liked now. He’d never heard Buck talk about a guy that way because Buck was straight, straighter than he was anyways.

“What about you Eds? What’s your type?” Buck asked.

“Well you were attracted to Shannon, she had dark hair and blue eyes. Do you still find that attractive?”

“The eyes yes, I have always fallen for people with beautiful blue eyes. But now, I think I’m more into the blondes with pretty smiles and long eyelashes. Personality wise, I like anyone who’s good with kids, obviously, but they also have to be sweet and I find it cute when they can be a little oblivious sometimes.”

Now it was Buck’s turn to hear his best friend basically describe him. It was eerie but like Eddie, Buck wasn’t catching on easily. They were both so oblivious to the others feelings, that it made them blind to their own. Several drinks later, Eddie really had to pee, but he hated leaving Buck at the bar alone, knowing that the girls would be all over Buck as soon as he walked away.

“Just go pee man.” Buck laughed, watching Eddie squirm around on his stool. “If a girl flirts with me I’ll just tell her that I have a 6’5” navy seal boyfriend or that I’m gay.”

“Alright but I won’t be long.”

Eddie got up and pushed his way through the crowd of people, finally reaching the bathroom. He did his business and washed his hands. He made his way back through the crowd, heading towards the bar when he saw Buck now sitting at a table with… her. A girl who looked eerily like one of his own sister’s. She had long dark brown curly hair with eyelashes that looked like they had to be 6 feet long. She had enough makeup to do 16 high school girls' faces before prom and her skin was olive tanned, showing that she was most likely Latina. She wore a skirt that barely covered her ass, in fact Eddie swore that he saw her thong when she leaned over into Buck’s space. It made him want to throw up. She also had on a top that her breasts were practically falling out of. She was just Buck’s type, what he had described for appearance anyways, but the thing that bothered Eddie the most was the fact that this girl was flirting with Buck. His Buck, His eyes darkened with anger as he walked over and put his arm around Buck’s waist.

“Excuse me but what do you think you’re doing?” Eddie asked.

“Um sorry but what’s it matter to you? I’m just flirting a little, back off.” The girl sneered.

Eddie growled. “Leave him alone, he doesn’t like it.”

“You can’t tell me what to do, of course he likes it,” she smirked, pressing his hand to Buck’s crotch. “I mean look at how hot I am.”

Buck looked up at Eddie with pleading eyes, practically begging his best friend to get the girl away from him. Eddie was feeling possessive all of a sudden as well as insanely protective. He pushed the girls hand away from Buck and stepped into her space, glaring down at her as he now was between her and Buck.

“I said back off and leave him alone. He’s mine.” Eddie growled.

Eddie swung his leg over Buck’s lap, straddling him fully, before pulling him into a deep kiss, tongue and all. It caught Buck by surprise and so at first he didn’t do anything. Seconds later, Eddie was shocked to feel Buck kissing him back, but it quickly had heat rushing to his crotch. Buck grabbed at Eddie’s ass to drag him further onto his lap, both of them moaned into the kiss as their forming erections rubbed together. When the two of them finally pulled away, they were panting and the girl was long gone, not that either of them noticed.

“Fuck Eddie, you’re so hot. I’ve wanted this for so long.”

“Yeah I can feel your dick.” Buck smirked.

Buck rolled his eyes. “Wanna catch an uber and get out of here? We can go to my place.”

Buck barely made it off the chair before Eddie had him by the hand, pulling him out of the bar. Eddie quickly called an uber before he and Buck waited by Buck’s jeep. They’d have to come and pick it up tomorrow. Some would say it was just the alcohol talking but both of them knew what they were doing, know how badly they had wanted this for months now. Who knew fake dating would get them here?

“If I knew this was how you’d react to a girl flirting with me, I would have gotten one to do it a long time ago.” Buck smirked.

“Shut up, you’re mine. Only mine.” Eddie growled, pushing Buck up against his jeep, kissing him harshly.

Buck kissed back, grabbing at Eddie’s ass, except this time his hands were under the waistband of Eddie’s jeans. Eddie moaned, feeling cold hands on his bare skin, shivers going up his spine. Buck pulled away first and just in time because the uber was pulling up. Now the ride back to Buck’s apartment had to be pretty awkward for the uber driver, since Buck and Eddie couldn’t keep their hands off of each other. They were grabbing at each other's crotches as they made out in the backseat. Once they arrived, Buck gave the uber driver cash and a reasonable tip, then he and Eddie rushed inside of his place. Buck was so eager to get his lips back on Eddie’s that he stumbled into him after closing the door. Both of them toppled over onto the floor, Buck on top of Eddie. They laughed a little before Buck’s lips were on Eddie’s, kissing him deeply.

After some well overdue sex, Eddie was cuddled up to Buck, even though Buck was being the little spoon upon request.

“Why did we take so long to do that?” Eddie asked.

“I have no idea but I guess all it took was jealousy.” Buck teased.

“Then what would you call it?”

“I don’t like people touching what’s mine, you are included in that. You’re mine Evan, no one else is allowed to touch you in an intimate way.”

“Mmm, I love a man who is protective.”

Buck rolled over so he was now face to face with Eddie. He gave the brunette a quick kiss and smiled.

“How long do you think we’ll be able to hide this?”

“Why hide it when we can show each other off?” Eddie grinned.