a home for the holidays

Greg is trying out a lot of new things.

It has been a real piece of shit Erev Rosh Hashanah and Greg Universe is on the road to Charm City. It’s a four and a half hour drive from upstate Empire, giving him plenty of time to fume. It’s 199X! 199X and he just broke up with his boyfriend and his mom is glad because now she thinks he can finally stop exploring his sexuality and find a nice woman to settle down with. He’s been dating women! He introduced her to one of his girlfriends last year and she told him not to tease her like that because she had just gotten used to him being gay and it wasn’t nice to his boyfriend Mark. Mark was dating Lise too! That’s why Greg said she was “our” girlfriend. And he doesn’t want to settle down! Fuck! He could take Mom not getting it. He really could. He’s been doing it for the last two years, plus before he came out, and she really means well, and she isn’t mean about it. She just doesn’t get it, but she kind of tries, and the point is that she isn’t an asshole about it on purpose. Unlike a certain fucking cousin he could name! This is it, this is the last straw. He could sit through brunch brushing off Aunt Deb asking when he’s planning on transferring to a four-year and Uncle Dave calling him a beatnik (annoying, but also funny) but if he has to listen to Andy casually mention the CJLS prohibition on "homosexual conduct" one more time he’s going to dump a bottle of wine out on top of that asshole’s smug, holier-than-thou head. And may it stain his hair pink and have him shave his own head, telling Greg he needs to cut his hair because it’s longer than Aunt Sal’s!

Charm City is the site of a newish Reconstructionist synagogue that promises to be everything his family’s home congregation isn’t: relaxed, modern, queer affirming, and free of his insufferable fucking cousin. Sunshine Justice mentioned it when he told her he was thinking of traveling down toward Beach City, suggesting that he should meet the cantor, who she mentioned was “a great guy. Very your type.” Something to look forward to. He called the office after storming out of brunch, and a very harried administrator assured him that Erev Rosh Hashanah evening services don’t start until 7 pm but that they’re held at Temple B’rith Sholom across town, for the larger space, and not to show up at the Beth Elohim building because nobody would be there. This gave him plenty of time to go home, grab some formal clothes and stuff them in the back of his van, drive furiously to Charm City, and have a minor emotional breakdown about the fact that he’s pretty sure he’s about to drop out of community college.

He walks through the doors of Temple B’rith Sholom early and a little exhausted, into a forming crowd of unfamiliar congregants. The first thing that he notices is the women wearing yarmulkes. A couple of them are also wearing button down shirts and slacks, and a smile breaks out on Greg’s face. The second thing he notices is that he doesn’t know where he is or what he’s doing, and he should talk to someone sitting behind a table and ask about getting tickets and find the siddurim.

Greg hears his name in a familiar voice, and turns around to see Sunshine, walking toward him with a woman he’s never met. Sunshine claps him on the back and hands him a siddur. She says she’s glad he could make it over, she didn’t expect to see him, he could have called. She introduces him to her girlfriend, and they enter the sanctuary together. The three of them sit down somewhere they're comfortable together. 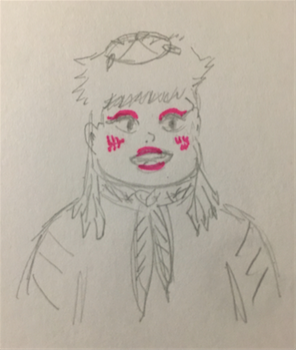 Sunshine Justice is Greg's friend who owns the venue Sadie Killer and the Suspects perform at in Empire City.