I am not a person of many words; but I must warn you that the following fic will show an Eric Cartman as the passive xD

This is the first time I'll describe him this way, in Spanish I have countless stories where he is the active evil one, always subduing Kyle (I almost always write kyman) but well, there is always a first time for everything.

I hope you enjoy the next story, as well as the quick drawing I did. Until the next chapter.

Everyone has a pressure point.

A sore that never healed, hidden in that unrecognizable side of the person, where the face that shows the world, itself, ends; and the face that deals with all the rot of the soul begins.

Everyone, unaware of the existence of such a person within them, walks through life wounded to death, not knowing that they are, all a little broken.

When nothingness comes, and there is no video game, movie, social movement, drug or object of obsession on which to fix existence, it is meaningless, and the wound in the heart bleeds, revealing in crimson red, the relief of that face that we desperately want to remain invisible.

Luckily the world is overflowing with coloured lights, ready to keep our gaze away from our own reflection, keeping us protected from that odious self-discovery, taking us farther and farther from our abyss.

The increases in anxiety and depression in a young and distracted population are just another statistic; yes, yes, we all know that the world is fucked.

My distraction was a product of countless sources, of infinite people. As a victim of a reality destined to collapse as programmed by my fucking grandparents, distraction became an indispensable element for survival.

Who could deny me something so simple? Who could bear the idea of a child lost in anxiety in the absence of a distractor? Who could justify the suicide of a teenager simply by objecting to his means of entertainment?

And now, in my teens' prime, I was breathing in airs of perversion. Sex, at this particular stage, was becoming an epicenter of development, a source of many kinds, for even more varied purposes.

Pleasure, orgasms, status, curiosity, youth, exploitation of beauty in its purest stage, a prominent adulthood, the reality of society waiting a few years away...

But I couldn't ignore it like everyone else, from the entrails of a whore, I was born wrapped in putrid blood, my innocence was claimed from the very moment of my sacrilegious conception. And what more can I say? just that there are experiences that tend to close the doors to a perception of a functional world, and distort the surroundings, deform it, mold it in favor of delusions, fears...

There were those who fought, struggled against this divergence of idea and reality, seeking to lessen this displeasure that swarmed from terrified guts, when contemplating themselves on a stage that was too... real.

I knew the feeling, the disgust, the fear... the memory of innocence as a dead-born entity, the disconnection with the rest of the world, the loneliness.

I was twelve; and, like this story, it happened abruptly.

The changes that impact on an irrevocable level are the most sudden; yet the idea, underlying the time that passed, resonated like a forgotten clock that soon had to be wound up. Because, as I have heard it said before, even if the act is sudden, the idea is always gestated for weeks, months, years.

I knew what would come, I knew the development of this satire to tragedy, and yet I did not stop pedaling.

It was about twelve o'clock, I had an argument with Kyle or someone else, I don't remember; and in my eagerness to prove something, something that now escapes my selective memories, I took my bike and drove to that area where... oh, I remember, where they said my mother worked.

I put my bicycle down in an alleyway far enough away from some opportunistic tramp, or the funny drunk on duty, and I rode into that jungle of neon and concrete and secrets.

The music that overflowed from those establishments, like sewer refuse saturated with garbage, gave off lyrics destined to pull obscene emotions from the bowels of their listeners, the last traces of exploitable life. Like vultures ripping the flesh from the corpses that had been made into bones years ago.

The streets were crowded with people, cars beeping every two seconds as the crowds passed through the narrow road without much concern, and the din among a thousand bottles of alcohol crashing into a sky painted in phosphorescent colors.

Everyone seemed to be used to the place...

And here comes into play this very necessary part of my psyche, which tends to omit memories that if it weren't for the argumentative gaps that my life seems to present, I wouldn't know probably existed.

I can't describe how I arrived at that establishment; maybe I recognized it from some other memory, or maybe someone gave me the address... so many possibilities.

A man with an intimidating structure was guarding the door. I reached into my pockets for that fake ID that Kenny had made for me... I don't know at what fucking stupid point I thought it would work. To say that I was suffering from dwarfism, the bitch had said. It was gonna work for sure.

I walked up to the obvious disbelief in that man's eyes. I pulled out my fake ID, and extended it in his direction, squeezing a ten dollar bill into my pocket that I hoped I wouldn't have to use to bribe him...

My last trace of childish innocence, in gestures that immaturity considers intelligent.

It was an uncomfortable moment, a strange one. But at some point he managed to define my features, and the surname on the ID seemed to bring a perverse glow to his gaze. He asked my age, I lied; he asked my intentions, and I lied. And a back door opened for my only access to a world of vileness from which I have not yet emerged...

An act of brutal violence took place behind those doors, violence that disgusted me to the point of orgasm. My insides were churning in nausea, and something in me became addicted to that sinful concept from that night on.

But that was only half the act.

The sweat of others, the aged sperm, the scarred skin and lacerated entrances left an unbearable knot in my chest, the pain took a back seat as my mind circled around this feeling of... Dissatisfaction?

Yes, this act was still in the middle.

The next week I took my knife, and discovered that the first part of this pantomime was nothing more than the justification for the next one. 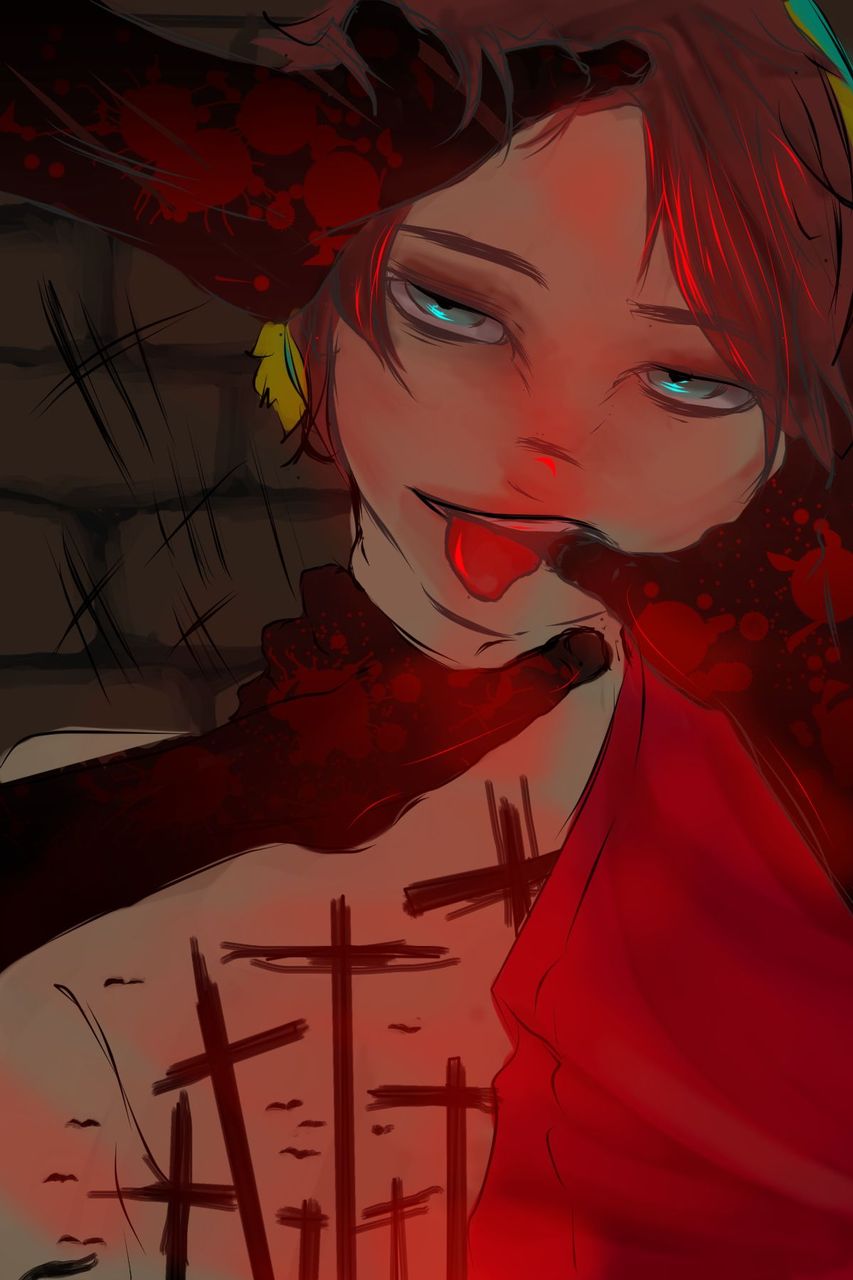