Throw Away the Key

After his father dies and leaves him nothing but the coolest car ever manufactured, the whole world turns to shit. Caught in the middle of a pandemic while attending the funeral, Dean is told he can’t return home and has to find somewhere else to ride out the mandatory month-long quarantine. Out of options, he calls his best friend Benny.

Shout out to our beta, I_Am_The_Blue_Sunshine! You thrived in our darkness, and now you're basking in our kinkiness. Welcome to the fold.

Blame the state of the world. That's all. Enjoy. 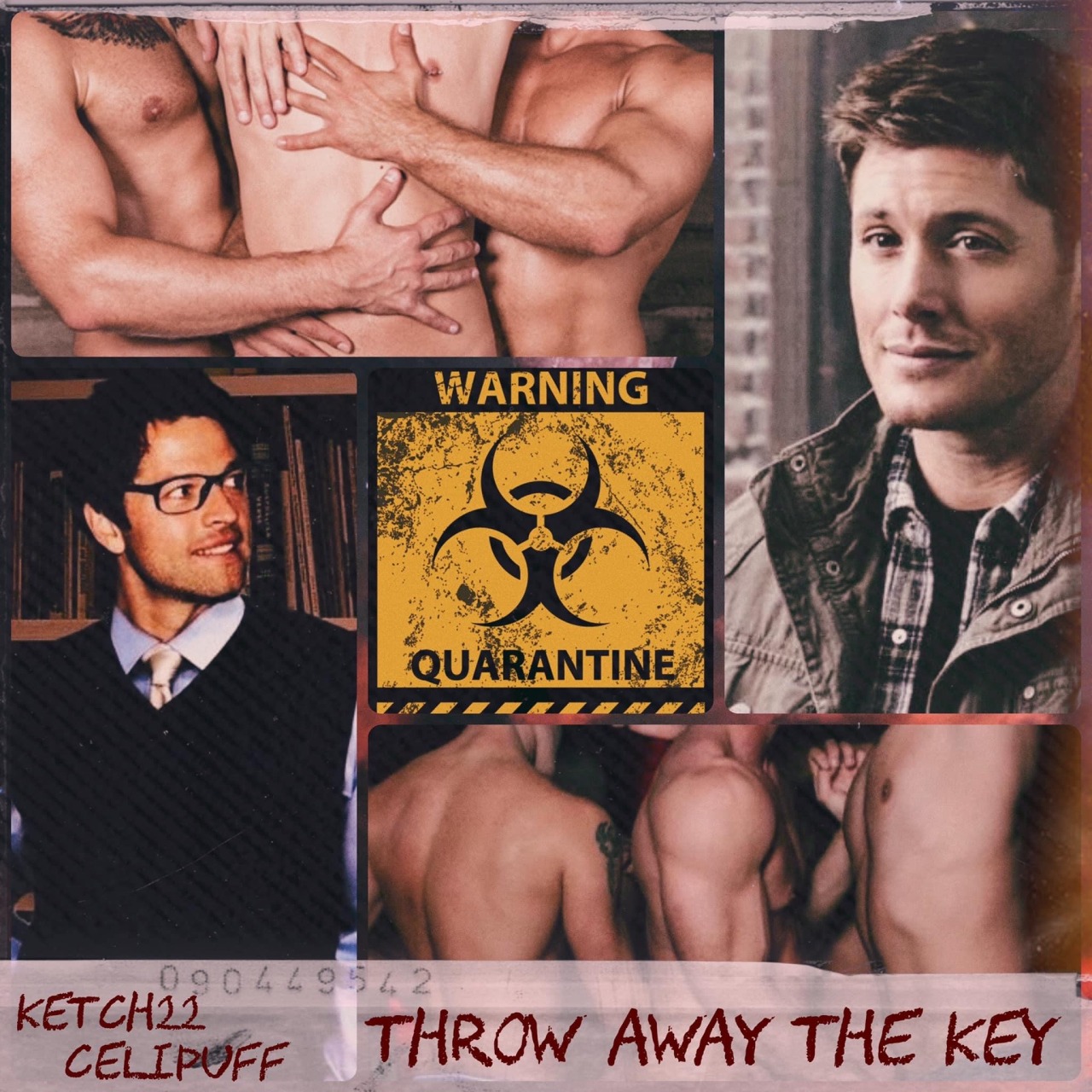 Dean scowled at his too-bright phone screen. His brother Sam had just informed him that their father had died - big deal, the guy’d been on death’s doorstep since Dean was a toddler, and Dean could count on one hand the amount of times he’d seen him in his entire life. The news certainly wasn’t worth waking up to, but then again… was anything worth waking up to?

He tried and failed to go back to sleep, and eventually rolled out of his bed and packed a suitcase. He’d lived in Kansas his entire life, but his dad had kicked the bucket up in Sioux Falls, South Dakota - he’d moved there just after their mom had booted his useless ass to the curb when Sammy was born, and he’d been there ever since.

His coffee pot sputtered to life as Dean rubbed his eyes and tried to find a cheap flight to the middle of fucking nowhere. He wouldn’t even bother going to the funeral, but Sam had mentioned something about John leaving Dean something in his will, and while Dean did alright working at the repair shop, he wasn’t about to turn down free shit. He couldn’t imagine his dad had anything worth a damn, but who knew. Dean had seen him so infrequently that the guy could’ve hit the lottery for all he knew.

A few hours and a metric fuckton of coffee later, Dean was sitting on the plane and anxiously looking for the stewardess. Boarding had been a nightmare, there was some kinda virus going around that had the whole world on edge. Some places had travel bans in place already so flights were getting delayed or outright canceled, and by the time he got through the chaos his nerves were shot. There’s gotta be some fuckin’ alcohol on this deathtrap somewhere, right? He regretted the mass amount of coffee the second the plane took off, and didn’t stop regretting his decisions until his feet were firmly planted back on the ground.

Dean found Sam waiting for him in the airport and after a tight hug, they made their way back to their Uncle Bobby’s house. Bobby had been better to Sam and Dean than John ever was, and Dean was genuinely happy to see him. Even more so when Bobby showed him what his dad had left him - a gorgeous black 1967 Chevy Impala. He’d seen the car a couple of times, but mostly just in pictures. The very first thing he did was take it for a test drive.

The funeral was a couple of days later, and it sucked . It was full of people he barely knew, including a half-brother he didn’t know he had. It was draining and morose and he couldn’t wait for the damn thing to be over so he could go back to Bobby’s, get good and drunk, and try to sleep before he drove back home to Kansas.

He got what he wanted, Bobby wasted no time opening a bottle of rot gut whiskey the second they got back to his cabin. The news was on in the background, Bobby always liked to stay informed… and it was a damn good thing, too. More and more reports were popping up about the virus that was spreading across the globe, and entire states were shutting down because of it.

“You think this shit’s gonna end anytime soon?” Dean asked Bobby before taking another bitter, stinging sip of his drink.

Bobby was busy cleaning one of his rifles and shook his head. “Nope, far as I can tell this shit’s just beginning. You might wanna pay attention though, son. I heard rumors Kansas is up next.”

“Up next?” Sam sat up a little straighter and leaned forward. “You think they’ll quarantine people?”

“Yep, and you boys better be prepared for it. Might wanna head back in the morning, see about stocking up on some essentials before all the crazies buy ‘em all up.”

Dean chuckled. “What, you think there’s gonna be a run on toilet paper or something? It’s a respiratory virus, not a stomach bug.” Whatever was going on, he wasn’t that worried about it. Bobby had taught him and Sam everything they needed to know to survive an apocalypse, a few days of quarantine and a toilet paper shortage weren’t that big of a deal.

But sure enough, by the time Dean was loading his suitcase up in his car the next morning, the order came down. As of midnight the following night, the people of Kansas were ordered to ‘Shelter in Place,’ whatever the fuck that even meant. He said his goodbyes, Sam was going to stay with Bobby until it was over but Dean had a job to do. He doubted the shop he worked at was going to get shut down, people still needed their cars fixed, right?

He called his roommate Charlie on his way back. “Yo, Charles! Hope you’re ready to be stuck with my pretty face for the next couple of weeks.”

“Couple of weeks? Dean, it’s a mandatory 30 day quarantine, it’s more than a couple of weeks. This virus is no joke, and uh… speaking of that…” Charlie trailed off, and the tone of her voice had him more nervous than anything else.

“I don’t think it’s a good idea for you to come back here, Dean. One of my coworkers was diagnosed with the virus yesterday afternoon, and I’ve been around her. It’s probably not safe for you to stay here, at least until I know for sure if I have it.”

Dean was silent as he digested that particular bit of horrible information. “Jesus, are you okay?”

She huffed a laugh. “Oh, you know me. No way I’m gonna let something as stupid as a cold take me out. I’m a damn queen, plagues are for peasants.”

“Always the optimist. Yeah, I’ll figure something out. You stay safe though, okay? Keep me updated too, if you start sprouting antennas I wanna know about it.”

“I don’t think this is that kind of virus, Dean, but sure. You’ll be the first to know.”

The second he was off the phone with Charlie, panic gripped him. Charlie was his age and they weren’t quite 30 yet, so her chances of surviving it were pretty damn high even if she did have it, but what the hell was he gonna do? He wasn’t planning on not being able to go back home. He could turn around and crash with Bobby, but the cabin wasn’t very big and Bobby was already agreeing to take on Sammy during this mess, there was no way Dean could ask him to let him stay. Both his parents were dead, which just left… Benny.

Benny had been a trade school friend of Dean’s and owed him a few thousand after all the times he showed up on Dean’s doorstep drunk as hell and looking for a place to sleep it off. He’d always said he’d make it up to Dean one day, and Dean knew Benny had a decent sized house out in the country… yeah, this was one favor Dean didn’t mind calling in. It was the only choice he had, anyway.

He called Benny, who answered quickly. “Well, I’ll be. Haven’t heard from you in a minute, brother.”

“Don’t be so dramatic, it hasn’t been that long. Hey, I’m just gonna cut to the chase cause I’m pulled over on the side of the highway and don’t really have time to beat around the bush. You heard about the quarantine, right?”

Benny was silent for a moment, and then, “Yep, sure did. You okay, cher?”

“Charlie thinks she’s got it, I can’t go home.” He didn’t elaborate, he knew Benny would know what he was asking without actually having to ask it. It was one of his favorite things about him.

Benny knew enough not to bother offering condolences. He simply told Dean where the spare key was, said it was fine, hung up, and left Dean to the open road and some Led Zeppelin.

He probably should have asked who Benny even lived with these days, but it didn’t really matter. They didn’t really hang out in the same circles anymore, so he doubted he’d have recognized the names and at the end of the day, he really didn’t have a choice. Benny could live with Hitler and it would still be better than being homeless during a crisis situation or running the risk of catching that god damned virus.

His eyes fell on the heavily tattooed back of a man with inky black sex hair and a cock in each hand, who was bouncing up and down on…

Not one single person turned to look at him. He pinched his own arm and lightly tapped his face, wondering if he was either dreaming or fucking invisible. Dean loudly closed the front door and walked in, circling around the back of the couch until he was in Benny’s view.

Suddenly though, Benny was the last thing on Dean’s mind. Turned out, Sex Hair was insanely attractive. His plump bottom lip was trapped between his teeth and his eyes were closed, but he looked so… blissed the fuck out. Like the guy was having the time of his life spearing himself on Benny’s cock and jackin’ two others off at the same time. Dean was half hard in his jeans just from the sight.

“Oh shit Benny, your friend is here.” A tall man with carmel colored skin and a dick like a racehorse said, and Benny finally looked around the fucking sex angel.

“What the f-..” Sex angel opened his eyes and when their gazes met, Dean was convinced he was definitely sent straight from heaven to fuck his entire life up. That shade of blue just wasn’t human.

“Sorry brother, thought we had a couple hours.” But Dean wasn’t even listening because before Benny finished, the man riding his cock pushed off of him and the other men, walking up to Dean like he wasn’t butt ass naked wearing a cock ring? Fuck, what the shit was this place?

“Hello, there. Where the fuck have you been hiding?” He tilted his head and licked those delicious swollen lips, Dean couldn’t help but wonder where that guy’s mouth had just been to make them look like that.

“Whoa, whoa.” Dean took a half step back as he finally found his voice again. “Easy, tiger. Don’t get up on my account, I’m not stayin’. Well, I’m stayin’, I don’t exactly have a choice, but I…” the smell of sex was so strong coming off the blue-eyed man that Dean temporarily couldn’t focus. “Benny! Where the hell’s my room?”

“Up the stairs, second door to your left. Sofa pulls out, unlike me.” Benny grabbed the angel again and yanked him back down, and just like that… Dean was forgotten.

He took his leave quickly, only remembering halfway up the stairs that his suitcase was still by the door. He doubled back down to go get it and stole one more glance at the scene in front of him, then took the stairs quickly and ducked into the second door on the left. He pinched the bridge of his nose and sucked in a couple of deep breaths, wondering if he’d have been better off just letting the damn virus take him.