A Song For Another Time - A Hikaru Hitachiin Story

After following his friends halfway around the world, Hikaru Hitachiin is trying to find his purpose in a world where he feels out of place. He's in a new county, in a place where he is always reminded of his unrequited love, his impending future and the probable separation from his twin. It also happens to be where Hikaru's finds himself constantly in the orbit of an extremely frustrating super freak who can't seem to stand the sight of his frown.

It's a story about a simple friendship between a girl who never really had anybody and a boy who always at least had somebody. Despite their sarcasm-laced, ridiculous relationship, this Flower Girl and Grumpy Face both catch a glimpse of a different world and real, deep friendship - but definitely not love. Nope. No way.

This story pretends to pick up after the end of Bisco Hatori's manga series Ouran High School Host Club. This story is the brainchild of someone far too in love with Hatori's character development of Hikaru to let it end where it did. Please forgive me.

Chapter 1: All I Know is a Simple Name 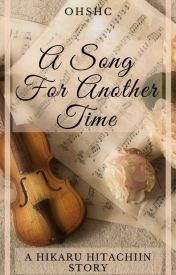 Fall in America was different than he had imagined. It was a strange combination of wet and cool and it seemed every street in the suburbs surrounding Boston were coated with the remnants of summer. He kept his head down, a hoodie protecting his dyed black hair from the light breeze, as he walked his way to the university.

He had no idea why he had been summoned to the school's library by his friend, but he welcomed the opportunity to walk alone. Ever since moving to America he and his friends had been closer than ever — mere apartments apart — and though it was so uncharacteristic of him, he was grateful to brood in his newfound singularity. It was hard enough that he and his brother were in a new place in suboptimal housing but everyone he was close to was also adjusting to the life change and not everyone was adjusting easily. Well, except her, but she was already used to living in a small place with little access to amenities.

It was so strange how everything in this city was simultaneously within a feasible walking distance but seemed incredibly far away and before he knew it he was face to face with the school's library. He opened the heavy wood door and quickly realized he didn't actually know where Mori was.

"Why did I even come when he asked," he thought out loud, annoyed at himself for so easily bending to the will of others.

Despite his anger, something inside him told him to keep going and he stepped forward on a mission to find his friend with a fierce determination in eyes. He got about four steps before a soft voice rang out somewhere near his right shoulder.

Stopping in his tracks, he turned his head toward the owner of the seemingly mousy (though she was honestly just trying to be polite) voice with an unamused expression wavering behind his eyes. Great, a girl, he thought sarcastically. Time to put on the charm. He readjusted his posture slightly, preparing to don his best host club persona but the girl got the first word in

"Are you Hikaru? Mori is in the third floor conference room," she said briefly before turning on her heel and disappearing among the bookshelves. He watched her long brown hair fade into the well-worn novels covering every surface as far as the eye could see, caught off guard by her brevity. She hadn't even taken a second look at him, leaving him feeling deflated after the effort put into his preparations. Was he already losing his touch? It was better to dwell on such things and so he quickly turned his attention to the staircase and made his way to the third floor.

When he finally found Mori, his friend was in a room closed off by glass walls, clearly in the middle of some kind of school-related discussion with five or six students. Mori was at the head of the table with his laptop open while another student stood in front of a projection at the side of the table.

"He's still busy. Why did he ask me to come here if he was going to be busy," Hikaru fumed inwardly as he turned to sit on a chair outside the room. He pulled out his phone while kicking up his feet onto a nearby table and was just about to text Mori a strongly worded message when the students began to file out of the room.

He lifted his head at the noise and caught a glimpse of a short, blonde head of hair making its way into the room. Hikaru clicked his phone screen off and shoved the device back into his pocket, frustrated. He dropped his feet, rose from his chair and begrudgingly made his way into the conference room.

"I don't know why you asked me here. You guys look busy and if you wanted to hang out, we could have just done it at the apartment when you got done with school work," Hikaru responded.

"We thought you might want to see the campus," Mori said in short explanation.

"That's right!" Honey continued. "You're going to have to go to college soon, so we wanted to invite both you and your brother to check things out today for yourselves."

Honey paused for a moment, looking around, before continuing, "Where is Kao-chan anyway?"

"He's busy with a group project," Hikaru responded, looking irritated. "We decided to take a few separate classes while we study here. So, he's off doing work for his Spanish class."

"I think I'll pass. I'm not really interested in Harvard anyway. Kaoru and I already decided we're going to go to a school with a fine arts program," Hikaru said.

Honey and Mori looked mildly disappointed, but Hikaru honestly didn't care. He wasn't up for touring the school, even if it was considered one of the best in the country. He and Kaoru had dreams and they didn't involve this school in the slightest.

"I'm going to head back now," Hikaru said, turning to walk away, but he paused for a moment before turning back as he suddenly remembered something. "Uhm, who was that girl downstairs? How did she know me?"

Mori's mouth turned upward the smallest fraction before he replied. "She is my classmate. She wanted to get additional materials from downstairs and I told her she might run into a lost high school student. I asked her to direct you to us."

He turned his back to them while waving and began to walk toward the staircase, his eyes aimed squarely on the ground. It wasn't that he was desperate to get home, but he hadn't even told Kaoru that they were invited to come here and he had a sinking feeling in his stomach.

Before he reached the staircase, though, he was stopped by a pair of shoes that suddenly appeared before him. He halted and slowly raised his gaze up from the dark blue Vans sneakers, up a pair of commoner jeans, a Harvard sweatshirt and met the stare of a pair of brown eyes so dark, he wasn't sure where the irises ended.

"That face of yours ... Is it permanently in a frown," the girl asked. Her face was painted in concern, but her eyes betrayed her in her quest for sincerity. She was obviously teasing him

He stared at her for a moment, taken aback. She caught me off guard twice in one day, he thought.

"You're the girl from downstairs," he said flatly. It was better to not give anything away by saying more.

"Mmmm. Good deduction; you could be a great detective," she said with a slight grin on her face. "You're going so soon?"

"I just came to see my friend, now I'm leaving," Hikaru said curtly. He didn't need to explain himself to her.

"That's too bad. I think Mori was looking forward to seeing you," she paused for a moment, scanning his face. "Well, it can't be helped, and it's really none of my business is it? So, I'll just be going."

"You're much too angsty; I hope you find happiness soon," she patted his shoulder and then breezed past him on her way back to the conference room.

Hikaru had returned his gaze to the ground with a contorted look on his face. Who the hell does she... Angsty? How does she know I don't have happiness ... He was completely lost in thought when he heard her voice again.

"Hey, grumpy face," she had turned back to face him before reaching the glass door and was waiting for him to register her word. He raised his head and moved to face her, slightly more miffed at being teased.

"Nice to meet you Hikaru," she said, waving her hand slightly. She turned and entered the conference room and began talking to Mori and Honey before sitting down at the table.

Hikaru watched her for a few seconds - confusion plastered on his face - before turning around and walking down the stairs. He wasn't fully brought out of his haze until his face was hit with the cool autumn breeze as he exited the building.

Without really thinking about where he was going, he headed toward home contemplating why Honey and Mori thought it so important for him to come. He kept his eyes on his feet, watching as one Timberland boot placed itself in front of the other.

Hikaru looked up at a bouncing head of red hair running toward him with arms outstretched. He smirked a little and kept walking forward. His twin jumped on him as they met and began questioning him immediately.

"Where did you go? Why didn't you stay at home? I told you my project wouldn't last long. Are you cold? Why didn't you bring a jacket," his twin asked, blending all his sentences together.

"Mori asked us to meet him at the university library," Hikaru said simply.

Hikaru shot a forced look at his brother, as if to say it's obvious isn't it ? He kicked his shoes on the ground a little before answering.

"You were busy and I didn't really want to be home."

Karou didn't push further and instead moved beside his brother, linking their arms together and began to walk him toward their apartment. There was silence between them as they weaved through the narrow roads and light drizzle began to fall.

"So... did anything interesting happen today," Karou asked.

Hikaru thought over his day, the walk, going to the library, the walk back and answered honestly.

"Not really. Nothing fun, at least," he said. But he was lost in thought before the words left his mouth.

I hope you find happiness.

He closed his eyes for a moment, sighing a little. What a weird person. Karou took in a sideways glance at his brother, curious. Twins can't read each other's minds after all, he smirked to himself.

"Should we pester Haruhi to cook for us tonight," Karou joked.

Despite reservations, I wanted to leave a quick note to thank anyone who takes a chance on this story of mine. This is the first time I've ever done something like this — sharing any inkling of my soul with the world — and I am incredibly nervous.

Anyways, in case you didn't read the description, this story is after Bisco Hatori's manga ends. So, if you haven't read it you may be a little confused.