I fall to pieces (When I’m with you)

“Please Rey,“ Ben breathed. The sight below her was truly a work of art. Ben looked like a mess, his wrists tied to the headboard, face red and sweaty, begging Rey for release. She did that. She reduced this 6”2 man to his knees, she’s responsible for the mess he’s making on the sheets

And this reply; B: I'm gentle, understanding & tall. I'm the perfect dom, Rey.
R: But that's like the perfect sub for me, Ben. I should be the dom.
Ben almost crying: But Rey, I...
Rey puts a finger on his lips: Hush darling, you're gonna be so good to me, right my Prince?
B: Yes my lady...

hi there! this is my first attempt at smut in years, so i hope it’s bearable!!

the title comes from the song ‘cherry’ by lana del rey

thank you so much to my friends will, sierra, and meccah for beta-reading and helping me write!

and lastly, thank you you to the reylo prompts account! 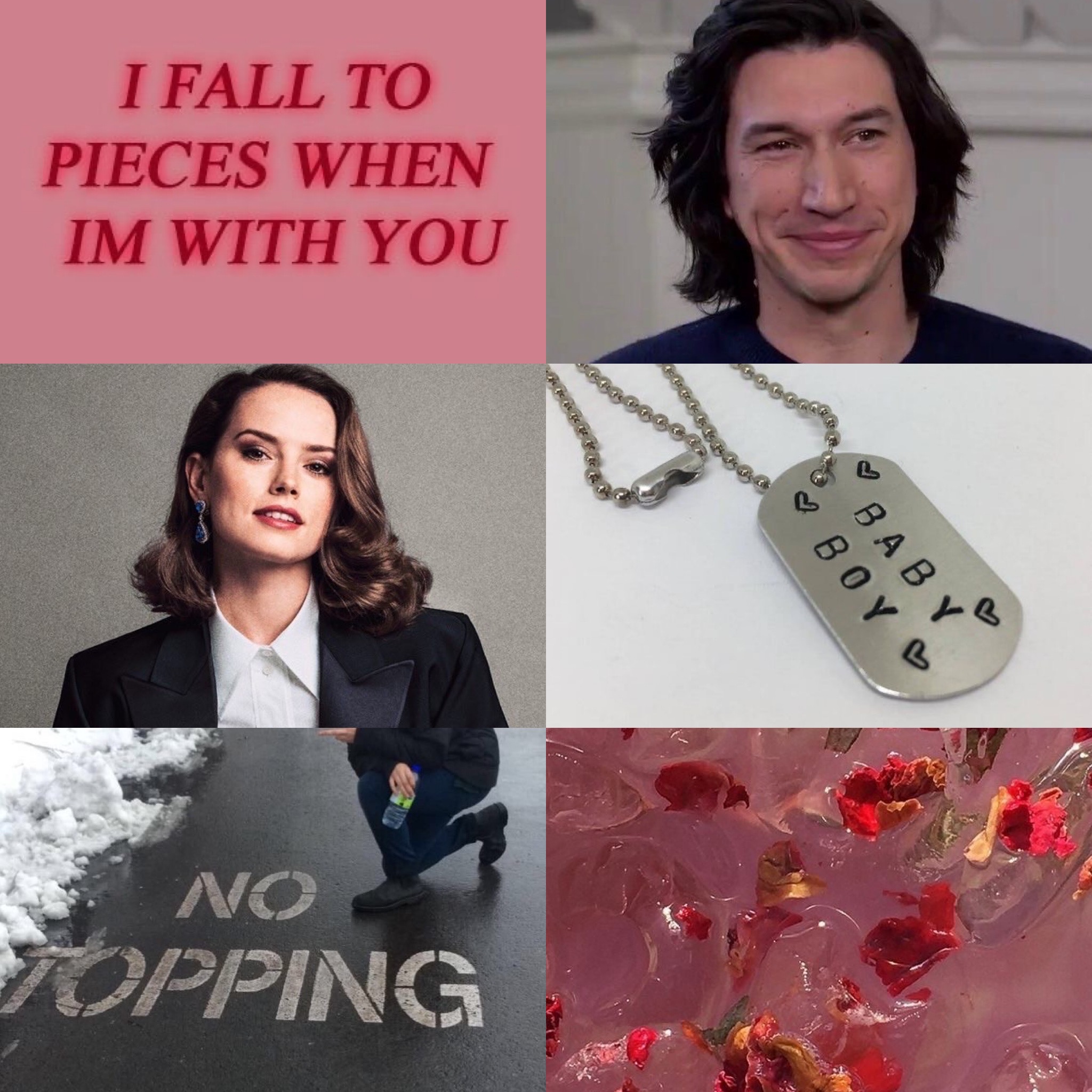 “When you guys fuck, who bottoms and who tops?” Rose asked as casually as if she was asking about the weather. It was just lunch, not ‘discuss Rey and Ben’s intimate relationship’ time.

“He’s a certified submissive babe.” Ben’s face reddened and he opened his mouth before Poe spoke again; “Sure he’s tall, and probably massive in other areas-” He faked a cough and continued, “but Rey radiates such intense top energy you can’t deny that.” There were murmurs of agreements between everyone at the table while Ben looked towards his girlfriend desperately for guidance.

“He would obviously be Rey’s sub if anything,” Jannah grabbed a fry and continued, “I would imagine at least some retaliation at first because Ben believes he’s to be a dom.” She pointed the fry at him before eating it.

“Yes but we all know Ben would literally do anything for Rey, so when his top domme girlfriend tells him to bottom, he’ll bottom.” Rose shrugged.

“You can actually imagine him bottoming for anyone? He’s like 7 feet tall!”

“For fuck's sake…” Rey said, cutting Finn off, and stood up, “Ben is not a dom.” Ben blinked and opened his mouth, as if he were going to say something, then closed it. “This is also why I don’t go to lunch with you guys anymore.”

“You love us!” Poe grinned.

“Unfortunately.” Rey walked off, leaving Ben sitting there gaping like a fish.

“F-Fuck! Rey!” Ben strained against the rope and whined.

“Yes, baby boy?” She grinned innocently, knowing the effort it was taking her partner to form two words.

“You need me to take care of you?” Ben nodded his head frantically and looked to Rey with pleading eyes. “I could never say no to you, could I?” The sweet expression on Rey’s face grew dark as she picked up the remote connected to the small, buzzing toy inside of Ben. He let out a loud moan and made sounds that were music to Rey when she turned the remote up a level.

“N-Need you.” Rey hummed, setting the remote down and shrugging off her robe. She made her way over to the bed and started untying the rope binding his wrists.

“I’m not a sub!” Ben blurted out during dinner.

“And why’s that, baby?” Rey cocked an eyebrow

“But that’s like the perfect sub for me, Ben. I’m the dom here.” She stood up and made her way across the table to where Ben set, towering over him and staring into his eyes.

“Hush darling boy, you’re going to be good for me, right my prince?” Rey brought a finger to his lips and Ben let out a choked noise at the touch.

“Be specific, fuck you where?” Rey grinned mischievously and prodded at his hole for a moment.

“Please, just, p-put your cock in my ass please.”

“Oh, Ben, if you wanted me inside of you, all you had to do was say so sweet boy.” She leaned down and kissed him softly. “So beautiful, so pretty, and you’re all mine. Mmm.”

“I’m – ah – yours. I’m all yours.” Rey slipped a thin finger inside of the large man's hole and took the egg out. Ben let out a soft groan when her fingertip brushed his prostate. After setting the toy on the bedside table and grabbing a bottle of lube, Rey stood at the edge of the bed, in between Ben’s legs as they wrapped around her waist.

“Spread your legs for me, baby, I want to see you.” His face reddened, “All of you.” Following her orders, Ben spread his legs open and Rey carefully started to work him open with one finger. Her fingers were small, so the stretch wasn’t very significant, but it wasn’t enough for him.

She took a step back and Ben's gaze followed her hands while they poured lube onto the silicone toy. Rey set the bottle down and turned her attention to him, she leaned down, kissing his forehead, and lined the cockhead against his asshole

They'd both had their fair share of experience in both positions before, in college Rey topped plenty of women and men. Ben subbed for men and women as well, but not very often, as he liked to be on top – that is until he met Rey.

“O-Oh fuck Rey…” She smiled and started to enter at a faster pace, grunts and moans filled the space once more, this time accompanied by the sound of their thighs slapping together.

“It’s okay if you can’t baby boy, soon though, I promise.” He let out a sigh of relief, (and pleasure,) Rey always understood how to make him feel better, she would never push for anything Ben wasn’t comfortable with. “Do you want to touch yourself? Or do you need me to do everything?”

Rey was teasing him, but Ben couldn’t help the spark of pleasure he got from being taken care of like this. “Can you touch me? Please?” His voice was hoarse, but he managed to croak out his request.

“Yes, my prince.” Rey nodded and smiled at her boyfriend, she was proud of him for asking for what he wanted, and not feeling like a burden. She took one of the hands she was using to hold Ben’s hips and grasped the shaft of his dick. His cries became louder and more frequent as Rey moved her hand up and down the length of his cock.

“I-I’m so close,” Rey started to thrust into him deeper, wanting to see the man fall apart at her hands, she wanted to see what she did to him.

Rey pulled out of him and undid the harness, she set it down near the abandoned lube and crawled next to the love of her life. “Hi.” He giggled and smiled, entwining their fingers as Rey pressed gentle kisses against his shoulder. “Can I do anything for you?”

“What do you mean baby? You already did everything I wanted,” Rey questioned. What could he mean? He knew how much she enjoyed pleasuring him.

“I want to make you feel good too,” Ben assured, suddenly moving back to let Rey rest her back against the headboard. He lowered his head down to her labia, looking up to see if her face showed any signs of distress or discomfort. After seeing her nod, Ben licked a stripe up her vulva, before focusing his attention on her clit.

Rey bucked her hips, — she was already close from grinding against the harness, but that wasn’t enough stimulation — she needed more. A finger slipped between her folds, and she let out a shaky breath when Ben started to pump his finger in and out.

“I… I’m close Ben-” The combination of his tongue swirling around her clit and his thick fingers inside of Rey was enough for her to reach her own orgasm. “I’m-“ She clenched around Ben's fingers and let out a high pitched moan.

“Rose! I thought we agreed we’d wait to ask until after desert!” Poe looked betrayed, “I thought you loved me…”

“Sorry flyboy, I only have eyes for Jannah.” Rose smiled and turned her attention back to Rey, “So?”

“Why are you all so interested in-” Rey paused, “wait.” She looked between her four friends, “What are the bets?”

“I’ll get Ben to answer that.” Rey went to the kitchen and everyone pulled out their own wallets. Rey returned holding Ben’s hand, and he stood in front of them nervously. “Go ahead baby, say it”

“I- Uhm... We-” Ben took a breath, “ImhersubandIbottomforReyshepegsme.”

“Yes! I told you!” Rose and Poe high fived as Finn handed each of them the money.

thank you so much for reading this! as i said, i haven’t written smut in years and even then it was Not serious whatsoever. i hope you enjoyed it. i’d appreciate it a lot if you left a comment/kudos!

feedback/constructive criticism is also very much appreciated, as im trying to get back into writing!