Without apparent reason, Hannibal decides to abduct Will from the BSHCI.
It is not the only questionable decision he takes.

Please read the warnings. Many thanks to Another_lost_one for having beta read this work, which will probably be included in a book I’m planning to publish ❀ 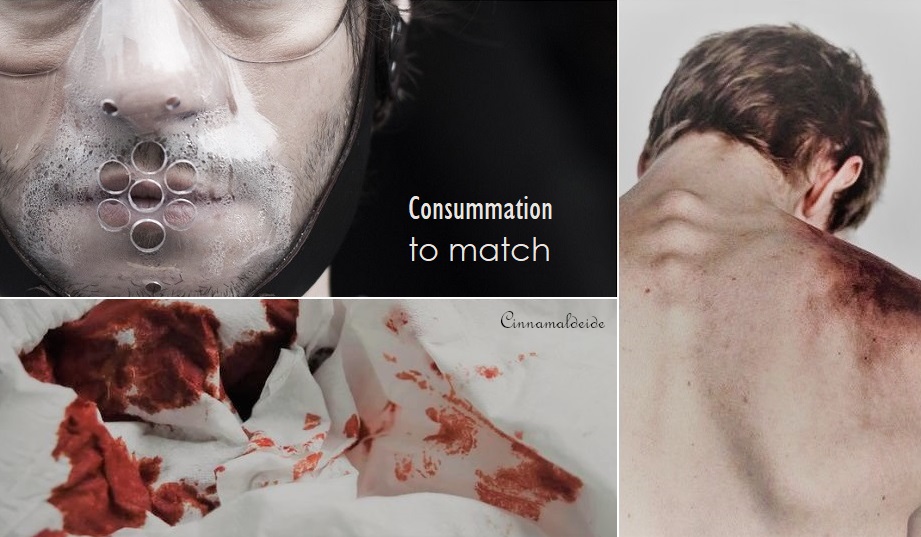 There had been blood and violence, an indefinite amount of both, and Hannibal had thrilled, hungrily gorged himself in their plentiful abundance.

“You killed so many of them,” Will whispered, almost unintelligible through the suffocating mask on his face.

He had seen the gore on his shirt, on his hands, under his nails.

He had seen the savage monster behind the pristine clothes and dark eyes.

“I would have killed many more,” Hannibal declared without trace of remorse in his words.

Will believed him utterly, despite his lingering drug-induced stupor.

It had happened so fast.

Moments earlier, Hannibal had proclaimed his visit would be the last Will would receive. Then, in a matter of seconds, the man had closed the distance between them through the bars of his cell.

The needle had pierced his skin so smoothly, Will had barely felt it. His whole attention had been drawn to the strong arm that had kept his rigid torso in place.

Hannibal hadn’t let him gracelessly drop on the floor, rather guided his slow fall in a languid, soothing descent, while staring intently at him and calling for an orderly to open the cell to check on his conditions.

Couldn’t just admit he missed me like a normal person, could he, Will remembered thinking, before his sight darkened and he regained consciousness in an unresponsive body, face down on a hard mattress.

It had frightened him, and then Hannibal had diverted the fear onto himself.

“Will you remove my mask, please?” Will pleaded, when his mouth could conjure more elaborate sounds than the initial gibberish of undignifying moans and pained sighs.

Hannibal didn’t even relent his thrusts. “Of course not, my dear boy.”

His soiled fingers held Will’s trembling flanks in a possessive, firm grip, although there were little chances for him to attempt an escape. Will had been providently sedated before the whole ordeal had begun, and the numbness in his muscles had yet to subside.

He could barely recall the muffled screams and sinister crack of bones, necks snapping under Hannibal’s palms, the obfuscated image of dead bodies on the floor when his eyelids had managed to lift for the briefest moment during his prison break.

However, he did recall fairly well the feeling of cold, skin divested of clothes, when Hannibal removed his jumpsuit.

He wouldn’t have required preparation before penetration, limbs relaxed and pliant, but Hannibal had taken his time and worked Will open with lubricant and one, two, three fingers.

Ever polite, even while abusing his victim.

“Don’t delude yourself,” Hannibal had said. “The pain will come later nonetheless.”

Will could feel it already. He was slowly regaining sensitivity in his arms and legs, trapped amidst damp blankets under Hannibal’s large, imposing frame. His mouth was dry, a trail of saliva running down his chin.

His head hurt, his wrist pulsed where Hannibal had kept him still, but Will wanted to know.

“What happened?” he breathlessly inquired.

Hannibal faltered, caught perhaps off guard. “A better question, my cunning boy,” he said, and Will shuddered at the possessive endearment, “would be who did.”

He couldn’t concentrate, couldn’t think straight while Hannibal made his forceful way into his ass with purposeful, merciless pushes, but Will intimately knew this wasn’t his original plan.

Something, or better yet someone, had forced his hand.

The thrusts became more insistent, brought Will back from his reverie. He ached all over, and had to grit his teeth and closed his eyes not to scream.

When he reopened them, he looked at the white sheets he was clenching in a tight hold, and realised.

The sight, familiar and mundane, reminded him of the candid uniforms he had come to associate with his scheduled meals during the confinement.

Sharp features. Eyes fixed on Will, interested and covetous, while the plastic tray was delivered on his side of the metal bars.

The association came sudden and unbidden.

“He was just an orderly,” Will hissed.

His short, laboured breaths fogged the mask and hindered his already blurred vision, but Will could still outline the long, nightmarish shadow of his captor.

There were beautiful, dangerous antlers sprouting from his head.

Hannibal lowered himself to cover his body, shirt buttons pressing against his sweaty back, and his mouth approached Will’s burning ear.

The quiet closeness and the confidential tone almost reassured Will, before sharp teeth sank into the meat of his tense shoulder in a vicious, marking bite.

Matthew taunted Hannibal during one of his visits, but Will doesn't know. Inspired by this amazing fanart.
I wasn’t kidding about the book. Let me know if you’re interested, or if you spot errors I should fix.
Find me elsewhere. Post on Twitter.