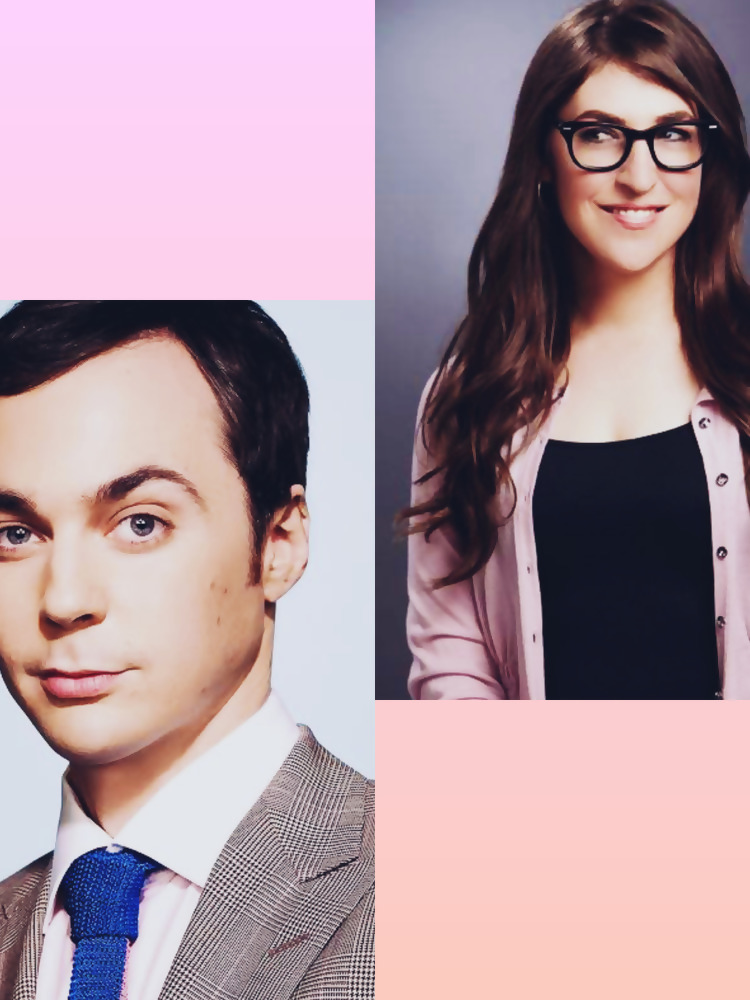 I thought I would easily forget the embarrassing faux pas I committed by kissing the genius man-child just a few days ago but I was wrong. To be honest, the reprieve I got was short-lived. Not only was CalTech's rumor mill focused on the golden couple of science, Dr. Cooper and Dr. Fowler, but then the Indian stargazer just had to rub it in my face.

I was so relieved that Dr. Cooper decided to stay a few days at Princeton with his beloved Amy. That way, I could avoid all the awkwardness.

If only Dr. Cooper would not return to CalTech, then all would have been well.

He has returned to CalTech.

I saw him walk toward his office just a while ago. I was about to exit my office to grab some snacks but as I caught a glimpse of him, I hurriedly closed the door, slightly leaving it ajar so I could take a peek.

Something was surely different about Sheldon Cooper today.

The stern, focused, and no-nonsense genius was humming!

He was humming a tune that I recognized as a song popularized by the Beach Boys.

He was humming the lyrics, "Oh darlin'... I dream about you often my pretty darlin'. I love the way you soften my life, with your love, your precious love uh huh oh…"

After humming those lyrics, he had this big wistful smile on his face, making it seem like he won the lottery.

I just caught a brief glimpse of him but something in his air and manner of walking changed. It seemed like he was bursting with happiness. His eyes seemed giddy, which on Sheldon Cooper was a truly strange phenomenon.

The genius theoretical physicist was usually so uptight, serious, and downright weird. But this morning, he seemed normal. He looked like a besotted man who's deeply in love with someone.

That brunette bespectacled frumpy nerd, Amy, must be some sort of miracle worker indeed! Whatever power Amy had on our generation's greatest mind in physics was truly something.

Argh, I hate that frumpy bitch! What makes her so special? What qualities does she have that I don't?

And then I saw it.

It seemed that the happy couple just couldn't wait to make everything official and I rolled my eyes. Who would have thought that the snobbish man-child, Sheldon Cooper, could be so enamored with a woman that he would gladly announce his relationship status on social media?

Ever since his return, I tried my best to steer clear of Dr. Cooper to save myself from further embarrassment.

The weeks passed and then summer ended. With summer's end, the storm was bound to arrive at CalTech. Dr. Amy Farrah Fowler was scheduled to return to the university soon.

I was very certain that it's not about sex. Everyone at CalTech knew that Dr. Cooper had an intense aversion to touch. So, I'm certain that he's not with Amy because of her sexual prowess. Besides, a frumpy nerd like her would surely be inexperienced in bed as well. So, clearly, it's not the sex.

I have thought about all the other possible reasons as to why Dr. Cooper was with his Amy but I just couldn't figure it out. Maybe it would forever remain a mystery.

"You seem cheerful, Sheldon," I heard Dr. Hofstadter's voice. Clearly, they were off to lunch.

"Amy is coming home tomorrow, Leonard. How could I not be happy?" Dr. Cooper said with his signature voice of haughty derision.

"You 'gon get some, you dawg?" the shorter physicist teased.

"Get some what?" as usual, Dr. Cooper just didn't understand.

"Oh! Leonard! A gentleman doesn't talk about these things!" Dr. Cooper was aghast.

"Ah, well… Since you stayed for a few days in Princeton, I'm certain you already had your engagement coitus there," this was said with a chuckle.

"Leonard, you know how I am not a touchy person. But since you're my best friend, I must admit, coitus with Amy is really something," I could easily imagine the same wistful smile Dr. Cooper always had when he talked about Amy.

Because of the conversation I just heard, I lost my appetite.

Maybe the frumpy nerd was a dynamite in the bedroom, after all, I fumed as I recalled Dr. Cooper's words. He called her a vixen for Pete's sake! So surely the sexual part of their relationship was great!

"Argh!" I stomped my foot in exasperation.

I hate you, Amy Farrah Fowler!

I was very tempted to skip work today. I didn't want to be at CalTech during the grand return of Dr. Cooper's Amy. I hate that frumpy bitch!

However, if I skipped work today, then it was as if I was a coward who didn't want to face her. So, I forced myself to get out of bed, took a long time in the shower, and made sure that I looked really good.

Dr. Fowler can keep Dr. Cooper but I would show her that I was the hotter, sexier, and prettier woman!

After all, it's not my fault that Sheldon Cooper was a blind man who couldn't see when a real woman was standing in front of him.

As I sat behind my desk, I kept on glancing at my wristwatch.

It's time to finally see that bitch in person.

"Amy!" I looked up from my salad as I heard the excited voices of Dr. Cooper's gang of nerds. They all stood from their seats as Dr. Cooper walked inside the cafeteria, his fingers intertwined with his fiancee's.

I finally met you in person.

Amy was much shorter than me but she was curvy. Despite her frumpy clothes, it was obvious that she was all woman. Her body reminded me of those Renaissance statues displayed and fawned upon in museums.

From afar, I could see that she radiated kindness and intelligence. With the way Dr. Cooper's friends were fussing around her, it was clear that she had already won their hearts as well.

Maybe that was the secret. I never did get along with Dr. Cooper's gang of nerds.

To my surprise, Amy was walking towards me.

I prepared myself for a confrontation.

I would act classy and calm. I'll show everyone that I was the better woman.

But then, I was stunned.

Instead of yelling at me or slapping me in the face, Dr. Fowler hugged me, and as she whispered, "Thank you."

It felt really awkward. I chuckled away the ill-feeling I had when she hugged me. When she let me go, I was shocked.

Her eyes were a very stunning green color. Maybe those eyes were the reason why Dr. Cooper was so besotted with Amy in the first place. I hate myself for admitting this, but even I envied her gorgeous eyes. It was truly captivating!

Amy walked back to her fiance and Dr. Cooper immediately held her hand.

I looked away from the happy couple and I just wanted to leave the cafeteria. I could feel everyone's eyes on me.

I was the other woman who tried to break up CalTech's power couple of science.

To everyone here, Amy was the golden girl while I'm the bitch.

I was about to clean my table when President Siebert entered the cafeteria.

"There's my superstar neurobiologist!" Siebert exclaimed happily and Amy blushed. Dr. Cooper looked at her with so much love and pride that I could feel the bile rising up my throat.

"Dr. Fowler, I have booked the university's largest hall so that you'll be able to cascade the recent findings of your study. You may talk about your work in Princeton and all the other developments you've made in your addiction studies. I have received a lot of phone calls and people want to hear from you. They want to learn from the best!" Siebert expounded.

"Oh my! Um - " Amy looked at Dr. Cooper and it seemed that the couple was having a silent conversation. When the lanky physicist nodded, Amy turned to Siebert again.

"What do you say, Dr. Fowler? It will just be a half-day lecture series. It won't take up too much of your time for wedding preparations. Congratulations on your engagement by the way!"

"If you think it will help CalTech and neurobiology, then I don't see any problem with us holding the lecture," Amy replied.

"Excellent! I'll finalize the details and be in touch with you. Welcome back, Dr. Fowler!" Siebert happily nodded to the nerdy geniuses and left the cafeteria.

"I'm so proud of you, Amy!" Dr. Cooper said with feeling.

"Thank you, Sheldon," Amy was blushing like a schoolgirl.

"To Sheldon and Amy!" their group of nerds cheered.

I left the cafeteria with a decision already made.

I would be attending Dr. Amy Farrah Fowler's lecture series.

I was curious to see if Amy is really all that!

As far as I knew, I'm still the better woman.

I was taller, skinnier, blonde, athletic, and so much more.

So, if Amy could prove to me that she was really that smart, then I would concede the battle.

After that, I would be leaving CalTech with my head held high.

Two days later, I received an email from the University's Announcement Board. There it was.

I quickly read through the details and clicked on the register button.

When I received the confirmation, I smirked.

I couldn't wait to see Dr. Fowler in action. It's time for me to see for myself if she's really all that.

I was tapping my fingernails on my desk when I heard noise from outside my office.

"Don't know if words can say, but darlin' I'll find a way, to let you know what you meant to me... Guess it was meant to be... I'll hold you in my heart as life's most precious part... Oh darlin - " I was certain that it was Dr. Cooper humming once again.

"Hello, Barry," I was stunned that Dr. Cooper acknowledged his nemesis.

"Off to see your fair Amy?"

"I don't have time for this, Kripke! And don't you come sniffing around my Amy!" I could hear the anger in Dr. Cooper's voice.

"Tsk! Tsk! Cooper! Amy deserves someone better than you!"

"Maybe she does. But you know what, Kripke?"

"Amy Farrah Fowler picked me," I could hear the pride in Dr. Cooper's voice as he left the other physicist.

I frowned. Hearing that conversation, I was even more determined to prove that I was a league above Dr. Amy Farrah Fowler.

Ramona Nowitzki is always the best. I would leave CalTech knowing that I'm the hottest scientist here. I just needed to see for myself that Amy is nothing special!

A/N: So this chapter is still canon but in Ramona's POV.

The next chapter will finally show Ramona that indeed, Amy Farrah Fowler is ALL THAT.

The gang and Ramona attends Amy's lecture series and Ramona finally concedes the crown to Amy.

Review, fave, and follow if you liked this chapter.

P.S. Lyrics of the song, "Darlin'" by the Beach Boys is mentioned in this story. After all, isn't Darlin', the ultimate Shamy theme song?