Thorns Along the Path, Roses Across the Bridge

Will update after results of the voting are released each week as the competition progresses until the inevitable :D

PLEASE GO CHECK OUT THE AMAZING WORKS BEING POSTED EACH WEEK, SERIOUSLY THERE IS SO MUCH TALENT AND I CAN'T PRAISE MY FELLOW COMPETITORS ENOUGH.
SEE THE LINK BELOW:

(each work will have its own rating/warnings in the A/N, main tags will be updated as I go)

RATED: TEEN AND UP 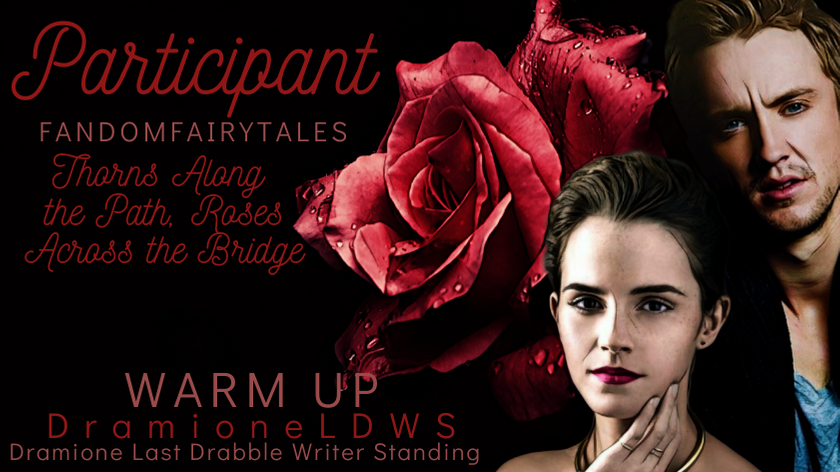 The muted, cold bite of the stone bench through the fabric of her pyjamas. Dewy grass under her bare feet, fresh and soothing. Leaves rustling in the eddying breeze. Not unlike the day she had first been brought to the Manor.

It felt like she hadn’t taken a breath in years, her lungs burned with the strain.

Footsteps crunching on gravel, still in the distance. He was coming. He would always come for her, for them. She understood how unconditional that statement was now.

It had taken months for Hermione to believe him when he said he could handle being there when she had nights like this… Her sweet Draco.

The marriage law had been hard on all of them in the wake of the war, Harry at least had the foresight to marry Ginny before it took effect; but she had been caught up in her fervid belief that the Ministry wouldn’t possibly enforce arranged matches. It was archaic… Barbaric… Regressive.

She had been an idealistic fool to trust them (shocking for someone so naturally logical and suspicious).

Under threat of arrest, she sat in Shacklebolt’s office and wept at the sight of her match on the Minister’s personal stationery.

On her wedding day, she carried blue roses, informing her groom in yet another way that he would never attain her.

Narcissa’s garden, filled with roses had quickly become her sanctuary and not once did Draco question her or try to invade.

They had come such a long way since.

She’d called him husband before she called him a friend and yet all along, unbeknownst to her, his affection had blossomed like his mother’s hidden garden. And finally, after witnessing its sheer, honest beauty; the product of their love began budding inside her.

The man she knew had left behind the boy he’d been, like the last rose of summer; for that, she would always be grateful.

She inhaled deeply, awash with perfumed oxygen, Hermione Malfoy wished she could wrap herself in the calm, cloying scent of their bloom.

He didn’t say a word, approaching gently with thoughtful caution that made her heart sigh.

Warmth cloaked around her shoulders where her husband had draped his robe. His hands brushing her hair out of the way. Her skin prickling at his touch.

Her tension drained at last.

“Sure you’re alright out here in the night air?”

“You say that every time.”

“And you never complain, my darling.” She shuffled closer, pressing a tender kiss to his cheek before curling into his side appreciatively.

“I know someone who might have a few things to say about it if she catches you out here in your condition.” He replied with a nudge and a fond smirk.

“Oh, please! We both know your mother has been harmless since I agreed to follow the Black family tradition.”

(rated M overall for possible future rating bumps, each work will have its own rating/warnings in the A/N, tags will be updated as I go)