Goodbye my angel (one shot)

He knows this day will come. He thought he is prepared. Clearly, Inoo is wrong. There is no telling how scared he is watching numerous doctors and nurses going in and out of Takaki’s room. In fact, Inoo is still wishing for miracle to happen, that somehow the doctors did some magic to make his beloved Takaki well again.

In short- Inoo is in denial.

“Give me one reason.”

“Your voice I guess,” Inoo touches Takaki’s lips. “Your whispers, your manly deep voice waking me up every morning- the most beautiful melody I’ve ever heard.”

Takaki smiles. He brings Inoo closer to him, making sure his mouth is right next to at Inoo’s left ear.

“Like this?” Takaki purposely whispers in a sexy tone and give a gentle kiss at the boy’s earlobe.

“I love you Kei,” Takaki kisses Inoo’s neck as he repeatedly whispers that magic words.

Inoo brings Takaki to face him again and immediately catches the sexy boy’s lips. “I love you too.”

Inoo turns to his right upon hearing Yabu’s voice. The boy is rushing towards his direction, followed by Daiki, Hikaru and Keito.

“Are you all right?” Daiki kneels in front of Inoo, holding the boy’s hands tightly.

Inoo only give Daiki a silent stare. The boy is expressionless. There is not even an ounce of sadness or worry portrayed on Inoo’s face. But from the coldness of his hands, Daiki knows Inoo must be extremely anxious deep inside his heart.

Once again, no words coming out from the boy.

“Kei…” Hikaru hugs Inoo, trying to offer comfort for the pitiful boy. “Don’t worry, we are here…” he reassures.

“Yuto just finished his filming. Yama-chan and Chii are on his way to pick him up. They’ll be here soon,” Keito put his cell phone back in his pocket after reading the text messages sent by the remaining JUMP members. “Shall we notify Takizawa-kun?”

The performance for their new single promotion ended. Takaki is stressed out not being able to hit the perfect note while singing today. Something just does not feel right with his throat.

“Maybe it’s the flu,” says Inoo as he passes a glass of water to his boyfriend.

“Why don’t you get a few days off and do a proper health check-up?” suggests Yabu. “You’ve been coughing for months now. I’m quite worried.”

“If I get myself checked in to the hospital reporters will go nuts,” Takaki leans on against the couch. “Plus, I don’t want to jeopardize our single promotion.”

“No, you need to continue your drama filming.”

“Then I can take you,” Keito offers himself. “As most of you know my timetable is quite free. And if Yuya get admitted I can be his replacement for a while. No biggie.”

“No but Yuya,” Yamada firmly state. “Don’t worry about work. We’ll get it covered somehow. Just please go for the check-up. At least do it for JUMP.”

Takaki feels touched. Each of the members are surrounding him now, looking at him with gentle and reassuring smiles. He feels blessed being part of this wonderful group.

Keito leads Inoo to Takaki’s bedside, followed by the rest of the members. Chinen and Yuto weep upon seeing Takaki’s thin body hooked on various tubes and wires. They surround Takaki’s bed, allowing Inoo to sit next to his boyfriend. Oxygen mask is covering Takaki’s pale face. Takaki’s breathing is very shallow. None of them has medical background, but from the reading on the vital signs monitor JUMP knows Takaki may leave them anytime soon.

“You’ve suffered enough,” Yabu speaks to Takaki’s left ear. “It’s all right, we’ll be fine. Time for you to rest my dear brother. We love you.”

“Unfortunately, this is not,” says Keito.

"What should we do?” Chinen looks at Yabu and Hikaru. “They won’t make Yuya quit right?”

Yabu throws out a long sigh. “Honestly Chii, I want Yuya to do the surgery.”

“Then Yuya will be mute! He won’t be able to sing anymore!”

“AT LEAST HE WILL LIVE!”

The eldest’s shout shocks everyone in the room. Hikaru gently rubs Yabu’s back, trying to calm the devastated boy.

Takaki’s medical check up reveals that he is having Vocal Fold Carcinoma. Worst, the cancer cell has infiltrated his vocal cord. Surgery and radiation therapy may remove the cancer cell- but it comes at high price.

Takaki will lost his voice, JUMP will lose another member.

Hikaru stands by Yabu. Losing a member may be tough, but losing a friend is even more dreadful. Hikaru wants Takaki to do the surgery and continue with radiation therapy. He wants to be able to celebrate Takaki’s birthday in the next 20 years to come.

“It’s not for us to decide,” Daiki reaffirms. “This is Yuya’s life. The decision is in his hands. Whatever his decision may be, it is our job to support him till the end.”

Inoo rests his head on Takaki’s right shoulder, rubbing against it several times, appreciating what may be the last warmth they shared in this lifetime. The member’s heart sink watching the two. They cannot imagine being in Inoo’s shoe.

Losing a dear friend is heart-breaking enough, what more when you lose your lover.

The glass that was in Inoo’s hand falls onto the floor, breaking it into pieces. Takaki calmly picks the broken pieces and stashes them into the rubbish bin.

“Are you all right?” he checks Inoo’s hands, worrying if the boy gets any cuts.

Inoo hugs his boyfriend tight. “I don’t want you to die…”

“Please do the surgery. I promise I’ll take care of you Yuya. Idol or not, you are still My Takaki. We’ll do this together. Please… don’t give up,” Inoo pleads.

“JUMP has been part of me for years. JUMP is my life. Quitting JUMP is like suicide to me.”

“I have seen what cancer treatment did to people. I don’t think I am strong enough to go through that… I want to use whatever time I have left to make good memories with you and JUMP. I want to live my life to the fullest with no regret, happily.”

Inoo weeps harder. He knows he could not change Takaki’s decision once he makes up his mind.

Takaki cups Inoo’s face and gently wipes his boyfriend’s tears with his thumbs. “Allow me to pamper you till my last breath, my lovely Kei.”

Takaki’s words only makes Inoo cries even harder. He buries his face into Takaki’s broad chest, weeping like a lost child.

JUMP supports Takaki’s decision. They let the man lived his life to the fullest, assisting him when needed. They held concerts and release singles as usual. Each single released has a solo song for Takaki, so that his beautiful voice can be cherished forever. Their managers tried their best to get all beach related job for the group, so that Takaki can be close to his beloved sea. For the past 2 years, they witnessed Takaki’s struggle living with cancer. They witnessed Takaki’s body become cachexic. They witnessed Takaki's hurtful cry passing his solo parts to other members when he starts losing his voice.

Above all, JUMP admires Inoo’s loyalty and determination taking care of his sick boyfriend even with his super busy schedule.  Inoo never left Takaki’s side, ever.

Takaki reaches for Keito’s hand. With his remaining strength he pulls both Keito and Inoo’s hand to his chest, overlapping them onto each other. Takaki moves his lips, trying to convey something in his silenced voice.

Keito nods several times. “I will,” he gives his words at the dying man.

“You are talking nonsense. I’m leaving,” Keito grabs his coat and stands.

“Wait,” Takaki urges in his now coarse voice. “I see the way you look at Kei. I know you love him too.”

“That’s it. End of discussion,” Keito is clearly fed up with Takaki’s crazy plan.

Yes, Keito cares a lot about Inoo’s well-being. Apart from Takaki, Inoo spends a lot of time with Keito in private as Keito is Inoo’s English tutor. Maybe Takaki is right, maybe Keito does have feelings for Inoo. But for Takaki to break up with Inoo so that Keito can take his place- that is mean and selfish.

“If you aren’t dying, will you give Inoo-chan to me?”

“No it’s not!” for the first time Keito loses his temper at the older boy. “Love is not something you can easily pass around. At least give him the right to love you!”

“You are never a burden Yuya… especially for Inoo-chan.”

“Promise me Keito, when I die, you will take care of Kei.”

“Can you please stop talking about death?!”

“Just say it!” Takaki begs. “I need to know that Kei will be in good hands, that someone will love him as much as I do… or maybe more…”

Inoo withdraws his hand and hugs Takaki around his neck instead. He could hear Takaki’s laboured breath. Slowly Inoo climbs onto the hospital bed and cramps next to his boyfriend. The lovebirds are in tears.

Takaki takes off his oxygen mask. He takes Inoo’s right hand and kisses it lovingly.

Takaki’s mouth is moving, uttering something.

‘I LOVE YOU’- Takaki struggles to convey.

Inoo gets up and kisses Takaki on his lips. “I love you too Yuya. Always, and forever.”

Keito turns around- he could not bear watching this heart-breaking moment. The usually noisy and cheerful group is now eerily silent. Holding on to each other, grasping the littlest strength left in one another to face this cruel reality.

Takaki’s gasps has turn to stridor. Inoo knows the time is near. He dearly takes Takaki into his arms, lovingly stroking Takaki’s head in the man’s final minutes. Slowly, Takaki releases his hand from Inoo’s, followed by a long beep from the cardiac monitor.

You live in me Yuya, always and forever.
Sleep in peace my love.
We’ll meet again someday.
When that time comes, let me hear your beautiful voice again.
Sing me those lullaby that I missed.

I love you, my Takaki. 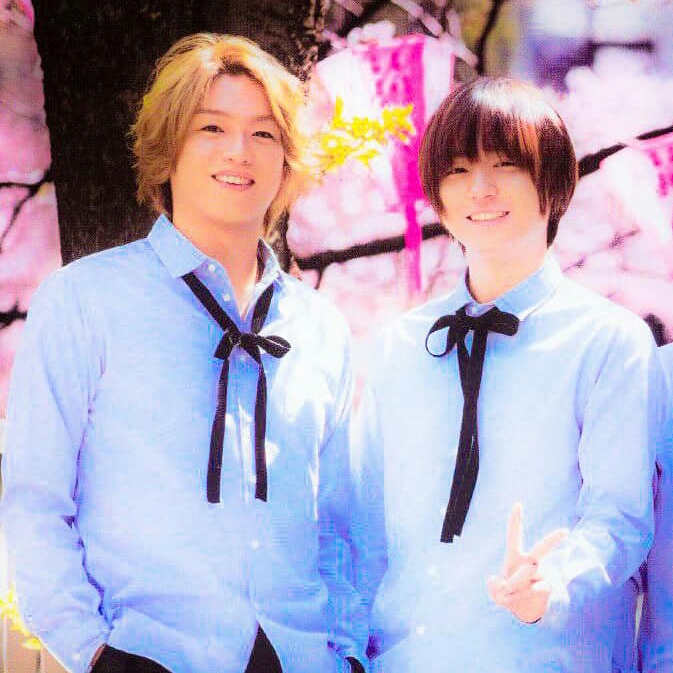 ficreader_02, takayuiHikari34, and Mary_0103 as well as 2 guests left kudos on this work! (collapse)