Meketa Nozumu: The lost hope dragon that became a hero

Chapter 6: The girl who hides her identity

Scales decided to put on a new persona. The life of being a hero in training was coming up and it was unnerving for her.
And after she spent time with Dabi, one part of the conversation repeated in her brain;

“I can tell that you hate yourself.”

“That you hate how you look.”

“If you don’t like how you look, then change it.”

After a while of planning and strategizing, she decided one thing. No one would know who she really was. And if they didn't like her, then it wasn't personal. Because they hated who she was pretending to be and not herself. It was a warped way of keeping herself safe. She didn't want to get hurt anymore.

Yeah. The last chapter was god awful, and even though I edited it. I'm honestly thinking of deleting it and starting it over. Yeah. I'm not feeling so confident in my writing right now, but what I do know, is that you only get better with practice. The feedback I've been revieving makes me feel like someone is actually invested besides myself, and It makes me really happy.

She unknowingly gave me an idea for a part of this story that I think would go perfect with Scales and how she's trying to change and become someone else.

It was around four days since I was at Dabi's house and everything seemed so good. Even though it was because of the illegal self-medication, I was more than willing to accept the emotional change. I was still a bitch no doubt, but it was more of a quiet and snarky, passive aggression. But with some situations, despite the drugs, I was still a raging bitch monster.

"I don't give a fuck that you're sorry. Honestly, I'm surprised at myself for trusting anyone so easily. I was stupid enough to even considering you would be honest with me, All Might." He didn't respond for a while as we both sat in silence. I was getting ready to go out and patrol west Musutafu city when All Might had visited me at the hotel room. We didn't speak for a while, but we both took a seat on the bed taking opposite sides. And when he tried explaining his point of view I just sighed.

"You're mad, and rightfully so." I didn't look him in the eye, but we both know that I was listening. "I would really like to put this behind us and move on. If you can't do it for me, please do it for Midoriya."

"I'm selfish." Was my simple reply as I picked at my nails, "But I'll forgive you." At this All Might perked up and smiled brightly, "But don't you ever think that I'm trusting you again." He deflated but nodded in understanding.

"Hopefully we can repair things." I could tell that All Might was slightly crushed. Just the thought of hurting someone's feelings and making them sad was painful for him. My manipulative side came out at this realization,

"We can start with me attending U.A. as a boy." All Might looked at me like I was joking. "I'm serious. Here are my reasons. I'll be able to keep an extra close eye on Izuku and the tight-knit group of friends he'll make. Because if people start targeting Izuku, they might kidnap one or eventually all of his friends." All Might sighed then nodded in agreement.

"Secondly, I'll be able to be taken seriously." He looked at me surprised, "Some men still have this mentality that women are weaker and they won't try to fight me at one hundred percent." I looked him dead in the eyes and continued, "I don't like being underestimated." All Might was surprised, but he could see why I would want that. I then added, "I also want permission to leave the campus grounds after curfew so I can watch over the west side of the city."

"I don't know about the last one, young Nozomu. I may be a teacher, but I don't control the rules that U.A. has." I gave an irritated grunt before saying,

"Try to figure something else then. Because I'll do it either way. With or without your permission."

"I know you would." All Might sighed. Then he really took a look at me. "You changed back. Is your dragon side something you can retract and re-grow?"

"It honestly appears when I'm extremely emotional and goes away when I'm completely calm." All Might nods in understanding before saying,

"I use calming herbs to help with the rage." He gave me a warm smile,

"That's good! You can be a better hero when you're calm and level headed." I nodded before he said, "I know that you've been very reluctant to accept my money but I have come to a conclusion about that."

"You could be a partner of a hero. You could get paid to keep a lookout at the same time." I was surprised, It was a really good idea. "But if I'm going to convince Principal Nezu and the hero agency I pick if that's okay. Until then use my money." Instead of getting annoyed with his reference to his money I got an Idea. I could be helping people out. Getting clothes, meals, and other stuff.

"I'll accept it then." All Might was pleased with my answer.

"Now I really have been wondering. What are your abilities? All I know is that you can inhale fire and change parts of your body into dragon parts."

"I'm really strong too. I can hold my own in a fight, for sure. As for the fire...I can eat it and it gives me energy or I can store it and use it as an attack." All Might nodded in thought,

"Is there a problem?" I said in annoyance,

"No. I just am wondering if I should find someone to help you with using fire. It would help you in the long run." As much as I hated to admit it, All Might was spot on. I did need to figure it out and fast.

"Whatever." All Might looked exasperated with my attitude. But at this point, I think he knew that I was excepting his help, but just didn't say it out loud verbally.

"I would recommend packing up all of your stuff tonight." I looked at All Might suspicious,

"What? Are you going to kick me out? Fine! I've dealt with living on the streets long enough anyway, so I don't care-"

"No, young Nozomu. You'll be living on the U.A. campus." I was confused. In the show, they didn't build on-campus living until after the USJ attack. Just as I was about to say something, All Might interrupted, "We have a small apartment built for special cases where a student had something going on financially or something else that is just as troublesome or if the student is orphaned." He then gave me a sad look, "It's happened before." We didn't say anything until I heard a faint 'Ping!' signifying that I had gotten a text message. When I picked up my phone, All Might picked up his and looked at me, "We should exchange numbers, in case something goes wrong."

"Fine." Was my simple response as I typed down the numbers he told me. I texted to him

'Why didn't give me more time to prepare and pack my stuff up? I can get it done, but a warning would suffice .'  All Might replied,

'Sorry. It was a decision that was decided today.'  I looked at him annoyed but excepted the answer.

"I'm going to start packing. And when I'm done we'll go." Then I remembered something, "I have one more condition." He looked at me questioningly,

"I'm going to need a mini-fridge."

when I was finished packing, I went on the front porch and smoked a little. When I grabbed my stuff and went into the parking lot, All Might, who was still in his smaller form, was waiting inside his car. When he saw me he said,

"Over here!" My eyes met his as a silent acknowledgment and I went over to him. Some people that were in the parking lot smoking cigarettes looked at me and said really mean things. It didn't make me mad though. My mind was at ease. All I could emotionally process was calmness and peace of mind. My chaotic thoughts had when from screeches to bearly there whispers. My simple response was looking at them and snarling as I flexed my claws at them. They then looked at me in horror, which I was now starting to find amusing, then looked away from me.

I let out a small chuckle then went to the car. After I put my stuff in the trunk of the car, I climbed into the passenger seat. "Let's go. Are you ready?" was silent before answering truthfully,

This is Mummy-Man. I forot to post what he looks like. Just so you know, when ever he's in this story and talks to Scales, try to remember what he says. He may seem like he's not, but he is a vital character. The holes in his face is how he breaths. They're actualy gages. 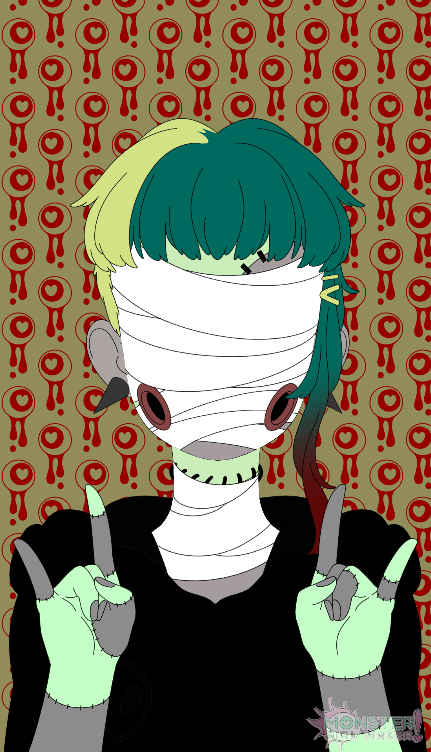 I think I'm going to make the chapters shorter, not really short, but short enough that my writing doesn't come off jumbled and isn't the best. Honestly, there might be two chapters in a day, but it just depends.

I'd light to hear your guys' thoughts about this fanfiction. I hope you enjoyed it! Stay tuned for next time!

Just remember to give me feedback or constructive criticism. It makes me a better writer.

I love you guys!

Hello! Did you like I hope so! If you did, tell me why? If you have any questions, just ask! And if you disliked it or have feedback, please comment below so I can learn from my mistakes. Thank you for reading!