Shen Qingqiu is given the task to go westward to retrieve sutras in an effort to cheer him up. That's going to be a no for him. There’s nothing he hates more than road trips. He prefers to wallow at home, thank you!

Liu Qingge fidgets in the corner. It’s clear he’s awkwardly rehearsing something in his head. It finally comes out as, "I would...prefer... shixiong to accompany me."

How is he supposed to say no to that? 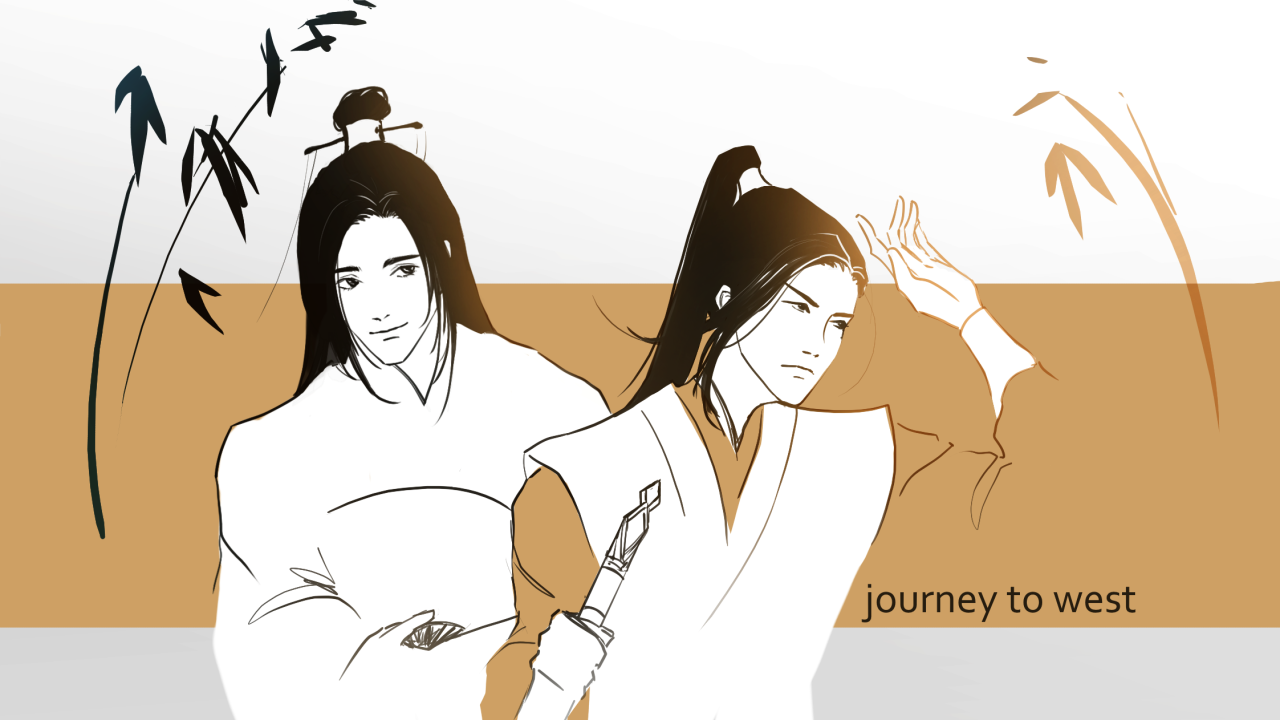 The monthly meeting is unspeakably boring to everyone in attendance. It would be fair to say it is on most participants’ list of least favorite obligations of their job.

It’s rare that these meetings are memorable. Peak Lords speak in orderly fashion, following their seniority. They sit on the floor in a rectangle, sip their tea behind ornate carved tables, and politely discuss the agenda. Whose turn is it to upkeep the mountain pass. What should they do for the next conference. There are lots of mn’s, nods, and pauses to acknowledge the tapping of a water clock marking time.

The meeting today, though, is pandemonium by comparison.

So far, Qi Qingqi is the loudest with a stern voice that carries over everyone else’s. “I’m not saying Shen-shidi is negligent of his duties as peak lord, but he really…” She shakes a hand as she reaches for words more polite than what is actually on her mind.

Liu Qingge interrupts her and says plainly, “That’s exactly it! He IS negligent! Those wretched disciples have taken all my weaponry and not returned...”

“Weapons?! He’s failed to pay for food! Those poor children are over in my kitchens every day!” Mu Qingfang remarks with a twitch of his brow.

Even Shang Qinghua, who normally sounds close to a mosquito among his louder peers, is shouting as he waves wildly. “Your kitchens!? Your weapons!? What about my dormitories? It’s like a refugee crisis over there ever since Shen-shixiong has stopped buying materials to maintain his roofs!”

The room dissolves into a buzz of competing complaints and conversations. Curses never before uttered during such a dignified gathering are flying everywhere. Everyone seems to have something to be irate about relating to the actions, or actions lack thereof, from one Shen Qingqiu. The grievances stack up, as if each peak lord were compelled to convince all others their suffering is the worst by far.

The room freezes and turns to stare. Yue Qingyuan rarely raises his voice, and it’s a shock to everyone when it booms across the room. His face is difficult to read; there are lines etched between his brows in irritation, amplifying his stormy eyes, but he remains seated (the only one), demeanor surprisingly calm otherwise.

Shang Qinghua is the first to shrink down and sit, having developed an unglamorous habit of obeying commands on instinct. When no one else makes any move to sit, he gives a sheepish look and starts rising to his feet.

He immediately drops down to the ground again. These social cues were just so hard to read!

The other peak lords grumble under their breath but grudgingly arrange themselves behind their tables. Once they are all seated, Yue Qingyuan speaks, his voice back to its usual timber of mixed authority and friendly chattiness. “I understand you have all been inconvenienced greatly. Your reports do not go unacknowledged,” he says with a heavy look, “However, we are here to find a solution, not to squabble.”

“Of course, zhangmen-shixiong,” Someone from across the room offers, “What do you think we should do?”

Yue Qingyuan looks down at his tea and heaves a weary sigh. Something was gravely wrong, but he also knew Shen Qingqiu was always one for the theatrics. It’d gone a bit extreme though--too much to explain by his flair for personal dramatics. This time wasn’t like the others, where he could tell Xiao Jiu was sneaking glances back to savour the response he provoked. This time, he’d simply stopped functioning.

“But not unwell of the medical variety. He is physically quite fine,” Mu Qingfang quickly supplies, trying to avoid getting saddled with the problem alone. “It’s more of the...mind.” The heart, he means to say, but it seems inappropriate for this sort of setting.

“Oh yes,” Shang Qinghua agrees with fervent nodding, “Ever since the…”

Liu Qingge rolls his eyes and grips his teacup so hard it fractures. The cracking sound startles his more timid colleague into silence. “Just get to the point!”

“I’ll say it!” Qi Qingqi throws out the truth, never one to beat around the bush, “He hasn’t gotten out of bed in days. He’s too heartbroken over that disciple of his. We have got to do something!”

“No no no! Don’t interrupt me. I’m going to say it, and I’d prefer to say it now and not later.” She held up a hand in protest. “The fact of it is he’s depressed! I had an aunt who was like this after her husband died. She wasted away in her room. It wasn’t until she travelled to visit distant relatives that she recovered. We need to get him out of that bamboo house.”

A chorus of agreements scatter across the room as they all nod to her assessment. But where? And how? It wouldn’t do to trick him. But it would certainly take some clever convincing. The scheming quickly begins with murmurs and eager expressions.

Shang Qinghua leans over after the room breaks out in chatter. “So how did that work? What happened to your aunt on her travels? You know, what actually made her better?”

Pouring herself some more tea, Qi Qingqi shrugs. Her nonchalant gaze almost saying on her lips’ behalf that it must be obvious.

“She met her second husband, of course.”

It’s the third time Yue Qingyuan has repeated the assignment, but Shen Qingqiu still can’t seem to grasp the details. Who can blame him? He barely got it together to comb his hair and put on clean robes in time for the guests in his house. There’s scrolls and clutter strewn everywhere in the room, but he’s long past caring about his reputation in front of his fellow peak lords.

“West, to retrieve sutras from the Theravada monks.”

Shen Qingqiu is a homebody if there ever was one. There’s nothing he hates more than traveling. The burden of the body shuttling the mind around between places sounds terrible. (And a journey to west at that! hah! is he supposed to be the monkey or the monk, he wonders.)

He narrows his eyes and taps his chin with a closed fan. “But I don’t understand. Zhangmen-shixiong is surely capable of going himself. I do not see why this requires anything of me.”

With a kind smile, Yue Qingyuan answers, “I must stay to manage sect affairs. The west borders very closely with a territory overrun by demons. It requires someone of your skill. You would not go alone of course. Choose someone to go with you.”

“I must politely decline. Have Liu-shidi go. He is more than capable.” That man can clear a field on his own just for the giggles and everyone in the room knows it. Shen Qingqiu snaps his fan open and hides his discomfort. This sounds fishy.

“You--” Liu Qingge frowns and bites something unpleasant back. He glances at Shen Qingqiu but immediately averts his eyes and stares at his shoes. Shouldn’t Liu-juju be happy to be complimented? What a difficult man.

"Your sword skills are unparalleled, master Shen,” someone adds with great deference. He can’t even tell who is saying it. “The western lands need your help.”

He merely sends a glare around.

Qi Qingqi is the next to speak. Her tone is softer than usual, saturated with the sweetness mothers reserve for troublesome children. “Shen-shidi, we care very much about you, and we’ve noticed…”

His eyes dart between her and the rest of the room. Qi Qingqi is still talking, droning on about something, but he quit listening a few sentences ago. His eyes linger on Liu Qingge leaning against the window sill, looking like he’d rather be doing laundry. Yue Qingyuan sitting on his bed looking every bit as concerned as the day he first woke up to that troll of a system. The other peak lords are all crowded around him in a circle, faces gentle like they are about to deliver him some very bad news.

OH HELL NO! GODDAMNIT! He recognizes this kind of thing. When people crowd all around you and ambush you while they all take turns telling you how much they care….

What the fuck! This is an intervention!

They’re still talking. He tries to focus and hear it, but it’s difficult with his heart raging.

“Won’t you just try and go? You can take your disciple Ming Fan, or Liu-shidi, or Shang-shidi.”

At the mention, he scowls at Shang Qinghua who just squeaks and throws up his hands in surrender.

He keeps his voice firm. He doesn’t need this kind of meddling. He’s FINE. It’s so blatant they are all just trying to get him to forget he had to push his favorite disciple down an abyss. These clowns have no subtlety. Sucks to suck! He prefers to wallow at home, thank you!

A long drag of silence accompanies the impasse. A sort of speech formulates in his head. He is about to elaborate his scathing rebuttal when he notices Liu Qingge fidgeting uncharacteristically.

"Do you have something to add, Liu-shidi?"

Liu Qingge flashes a shocked expression at being called upon, then shifts his eyes to the left to avoid the inquiry. It’s clear he’s awkwardly rehearsing something in his head. He does that thing again where he steals a glance before immediately shifts his eyes back to the blank wall. He finally grits through his teeth, "I would...prefer... shixiong to accompany me."

As if working up some courage, the man scuffles his boot on the ground before sighing and meeting Shen Qingqiu’s stare. Those dark eyes are captivating, pleading with an earnestness he didn’t know could exist, so stirring that a “yes” almost tumbles out of Shen Qingqiu’s mouth unfiltered.

How is he supposed to say no to that?