Everything Has Breath Inside

Perfuma tells Adora the story of how she first learned to use magic.

Perfuma looks back out into the Whispering Woods, weighing what she’s about to say. She takes a deep, centering breath. “Adora… I want to tell you a story.” She looks back into silver eyes, reflecting the light of the still-novel stars overhead. “Do you know what I was before I was a princess?”

Perfuma hesitates, but keeps on. “Well… I used to be a prince.”

This is my first ever fanfic and my first creative writing project in a long long time, so enjoy!
Special thanks to Noelle and Crew-Ra but especially to character designer Rae Geiger for telling us that Perfuma was supposed to be trans. Even if that didn’t make it into the show, it still means a lot to me and a ton of other trans women that you were thinking of us.
Thanks also to my tumblr mutual Melissa (@dddaikon) for helping me edit this and for providing the beautiful drawing of Perfuma!

“There is beauty in the way of things.”

—The Oh Hellos, “There Beneath” 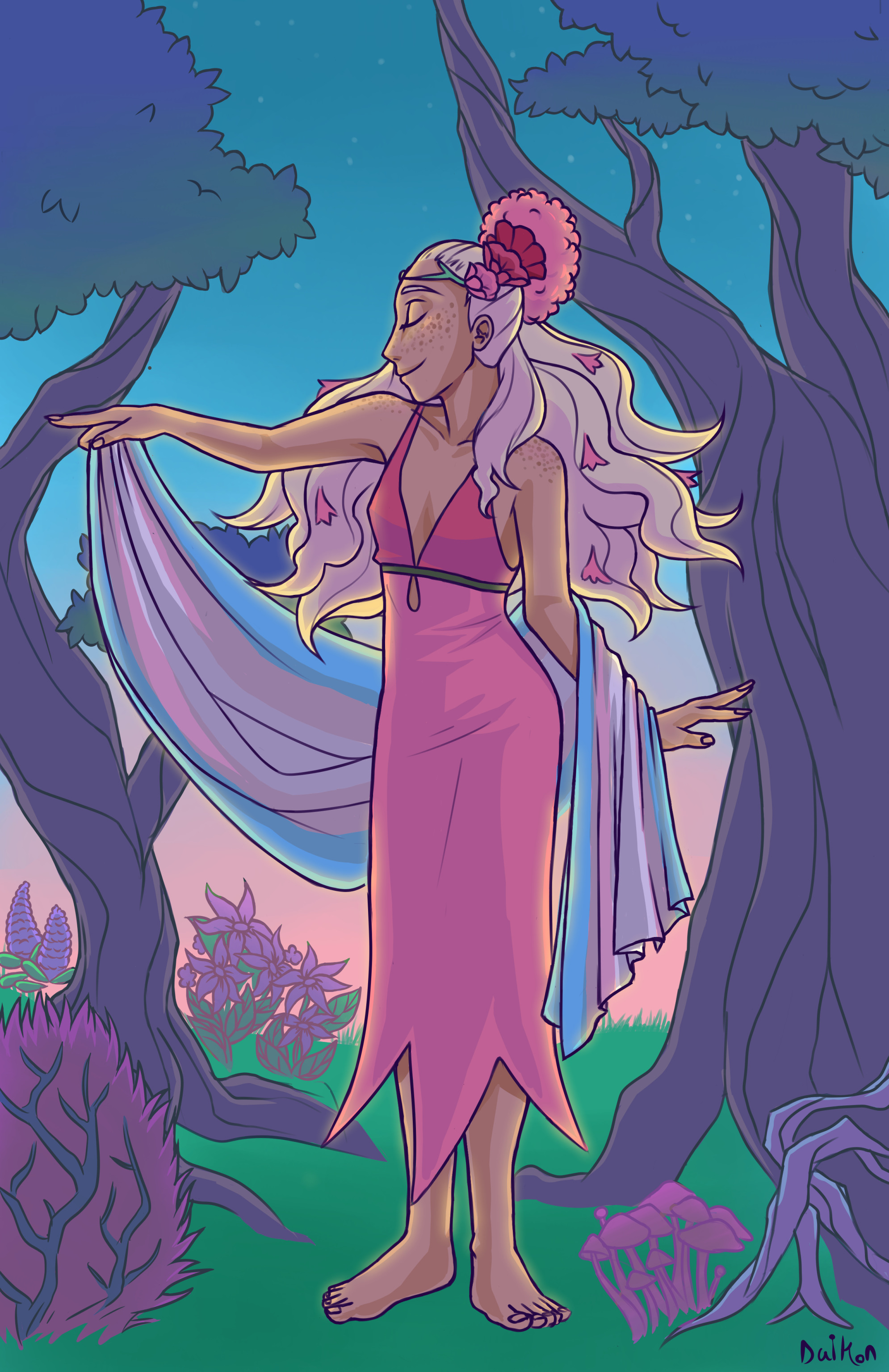 Adora tosses and turns on the thin mattress pad on the floor of the abandoned Horde base. She can’t count many nights of good, restful sleep in recent memory. The last one she can recall was back on Darla. She and the others were fleeing from Horde Prime’s wrath after rescuing Catra. The bed on the starship wasn’t exactly comfortable, but she had other things to help her sleep: the softness of Catra’s newly cropped hair against her face; the warmth of her body; their tangled legs and her tail draped over Adora’s exhausted form.

Now, though, Catra sleeps curled up on her own mattress pad, with her back to Adora. The warrior stares at her childhood best friend, former enemy, now maybe best friend again, and takes comfort in the steady rise and fall of her ribcage. They haven’t had that level of vulnerability with each other since they got back to Etheria.

Catra had receded back into herself around their entourage of princesses. Adora understands why — after all, up until a few months ago, she was trying to kill them all. She was trying to kill Adora, too, at least in theory. But Catra and Adora are special to each other, always have been. And Catra has changed; she saved Glimmer, and even played nice for most of the trip home. Surely they were mending this and could be together again soon, just like when they were kids — right?

Adora shakes the longing out of her head and sits up on her arms. She definitely isn’t going to get any sleep at this point, especially after what had happened in the Fright Zone that day. Bow and Glimmer had insisted that everyone get some rest before they talk about what Bow’s dads had discovered but, well… She’s She-Ra. She doesn’t need rest. She has to be doing something, has to be getting ahead of Horde Prime, thinking of ways to stop him from taking the Heart of Etheria.

Quietly, Adora shifts out of bed and pulls on her boots. She took late night walks when she was in Bright Moon all the time, and though she doesn’t want to bother with getting lost in the Whispering Woods tonight, she thinks at least the fresh midnight air might clear her mind. She creeps past Catra, with Melog curled at the foot of her bed, and heads for the curtain of violet ivy that conceals the base.

Perfuma appreciates the serenity of nighttime, camped out in the Whispering Woods. The air is sweet and moist, and she likes imagining what odd creatures are making the sounds she hears from the darkness within the trees. Tonight she’s perched on a rock in the clearing outside of their hidden campsite, just watching life continue around her, feeling the magic in the trees dance through their root systems.

Of all the people she expects to sneak out from behind the moss and into the clearing, she expects Adora the most. She thinks back on their harrowing experience in the Fright Zone earlier that evening. They were chasing after Scorpia — dear, dear Scorpia. Her heart nearly breaks at the thought of the kindest, gentlest woman she has ever met casting bolts of red lightning at her without so much as a word. But Scorpia will be okay, this she knows. The feelings that have begun to blossom between them can’t be snuffed out by some dinky little chip on Scorpia’s neck. Her heart is strong; they will get her back.

Adora, on the other hand… she isn’t confident that Adora is going to see the other side of this. Something is clearly eating away at her, something powerful enough to interfere with She-Ra, the most potent form of magic there is. And if something is hurting Adora that badly, she isn’t just going to stand by and watch her destroy herself. She has to talk to her. She has to help Adora find the right lesson in all this. That is, if Adora wants her help.

Perfuma keeps her gaze fixed on the Woods as the younger woman emerges from the campsite. Out of the corner of her eye, she watches Adora start to scan the clearing. Adora’s dark eyebrows push up in surprise when she spots Perfuma. “Oh! Uh, hey, Perfuma. What’s uh— what are you… doing?”

Perfuma smiles brightly back at her. “I’m just meditating!”

Adora’s face drifts from a look of embarrassment back to her usual subtle mask of anxiety. “Ah. Right.” She strolls over to Perfuma.

“Shouldn’t you be sleeping, Adora? You had a tough day.”

Perfuma’s genuine concern for her softens Adora’s expression into a more vulnerable state. “Yeah, I guess I did. I just… I don’t know. Couldn’t get myself to sleep. Shouldn’t you be resting too, though? You were there for most of my tough day.”

“I am resting! I don’t need to close my eyes and sleep to rest. Do you want to join me?” Perfuma scoots over, gathering her pink dress back underneath her, and pats a spot on the rock next to her.

“Oh, uh— sure.” Adora hoists herself onto the smooth, gray stone, dangling her legs off the side. She stares emptily into the distance and furrows her brow.

Perfuma lets a few moments pass, then decides to push just a little. “Is there something you wanted to chat about?”

The warrior lets out a deep sigh and bows her head. “Yeah. I’m just… trying to figure out what happened today. I’ve never just lost She-Ra like that. If we’re gonna defeat Prime, that can’t happen again. I’m…” Adora trails off, her eyes darting back and forth in thought for a moment. “I’m just scared, is all.”

Looking into her eyes, Perfuma puzzles for a moment. She-Ra might be powerful, but she’s still just magic. And if she’s anything like Perfuma’s magic then… “Adora, let me ask you this. Why do you use the She-Ra? What’s your motivation?”

Adora shrugs. “I have to use She-Ra to save Etheria, right? To save the universe? It’s the only way I know how to be useful.”

“Ah! But do you want to save the universe?”

“Wh— huh?” Adora’s anxious face twists into one of genuine confusion. “Of course I do, why wouldn’t I want to?”

“Let me clarify.” The older princess shifts around to face Adora sitting on the rock. “You use the She-Ra because you feel like you have to save the universe. But that’s not the same thing as wanting to.”

Adora scoffs and crosses her arms. Her lips purse like she’s about to parry Perfuma’s suggestion, but she stops. Her eyes narrow in thought and she rests her chin in her hand, propped up on her knee.

Perfuma takes this as a cue to continue. “You see, all magic is based primarily on intention. We do the things we do as princesses by focusing our desires, visualizing the whole of what we want to happen.”

“Doesn’t the magic come from the runestones, though?”

“The runestones are just an easier way of focusing!” She forms her long, slender fingers around an imaginary orb between her and the other princess. “Once you forge a connection with a runestone, using magic becomes second nature. You don’t have to focus on your intentions any more than you have to focus on breathing or blinking.”

“Oh. Huh.” Adora looks at the shape Perfuma’s hands have made, then shifts her gaze back to stare at the ground between her feet. Her ponytail swishes against her back. “But I… broke my runestone. When I shattered the sword.”

Perfuma’s lips crease into a straight line, dimpling her tan, freckled cheeks. “Hm. Yes, you did. I suspect that means that you can only use the She-Ra now when your heart is fully committed to your intentions. So if it’s not, if you can’t put your whole mental energy towards a specific outcome, you can’t control the She-Ra.”

Guilt sinks Adora’s posture. She begins to shake, ever so slightly, as she breathes. “Does that mean… I don’t want to save the universe enough? That I’m not committed?”

Placing a hand gently on Adora’s back, Perfuma continues as carefully as possible. “Well… It sounds like, right now, you don’t really… intend to defeat Prime. You’re just obligated to do so, in service of some debt or burden you carry.”

Covering her face, Adora lets out a groan and her ponytail slinks over her shoulder.

“If you want to bring the She-Ra out now, you have to set your sights on the whole outcome that you desire. Simply wanting to win isn’t enough. What is it you want when all the work is done? What do you want after we win?” Perfuma rubs small circles on Adora’s back with her thumb.

Another sigh escapes her lips, and Adora lifts her head to meet Perfuma’s gaze. Perfuma recognizes the sorrow etched into Adora’s forehead.

She knows this look, remembers the grief behind it. “Sometimes, if you don’t… see a future for yourself,” the floral princess says, cautious of her own feelings, “your intentions, they become sort of… half-hearted. And your magic follows.”

“You sound like you’re speaking from experience,” Adora says, her brows pushing together in concern.

She lets out a soft chuckle. “Yes, I suppose I am.” Perfuma looks back out into the Whispering Woods, weighing what she’s about to say. She takes a deep, centering breath. “Adora… I want to tell you a story.” She looks back into silver eyes, reflecting the light of the still-novel stars overhead. “Do you know what I was before I was a princess?”

Perfuma hesitates, but keeps on. “Well… I used to be a prince.”