Each chapter represents a different week of the competition. The stories are not related. Authors were able to use the flower itself or the meaning in bringing the themes to life.

Stories were not alpha-ed or beta-ed and were submitted anonymously. 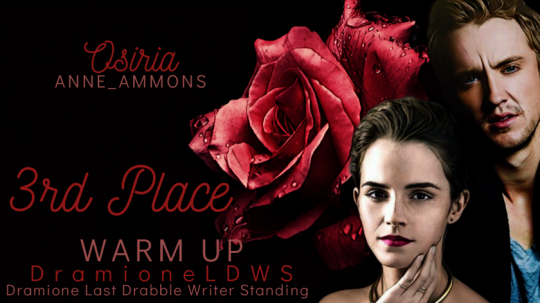 There were few things Narcissa loved more than her time in the rose garden. Yes, elves could do the work, but the roses were her pride and joy. She had been an excellent Herbology student, and after her marriage, the garden had been her escape. Narcissa loved digging in the dirt — properly gloved, of course.

Her favorite rosebush was the Osiria. It was planted at the center of the garden. Most had never seen a bloom like it, each petal a deep red on the inside, but somehow, white on the outside. It was quite striking. Together, the colors spoke to love, marriage, and new beginnings. While it had started as a small cutting, she had carefully nurtured the plant year after year until it had grown to be the star of her collection. It had outdone itself this spring and Narcissa was just waiting for its buds to break.

In the garden, Narcissa could let her thoughts wander as she plucked weeds and pruned, hidden between the roses. She let her mind drift to her other favorite subject, her son. Draco had sauntered down to breakfast with a spring in his step and Mippy had whispered that he had not been home last night. He probably thought he was being secretive, but her son had always been an open book to her, much like she could tell what her roses needed even though they didn’t speak.

For many years, she had listened to Draco complaining about the swotty, bushy-haired girl who continually bested him at Hogwarts. Narcissa had held her son back, for both of their safety, when the girl was tortured in their home. The complaining began anew when Draco started working with her at the Ministry last year. But several months ago, he had stopped talking about her at all — and that in itself spoke volumes.

Mippy had mentioned that Draco had brought Miss Granger to visit their library a few weeks ago, although he hadn’t summoned Mippy to bring tea. “Mistress, how is we having guests with no refreshments?”

And now, this latest development. Things must be serious between her son and Miss Granger. And while the girl was a muggle-born, Narcissa would not begrudge her son his happiness.

Having finished the row, Narcissa stood and made her way to her prized bush. Upon reaching it, however, she gasped in shock. Instead of a vibrant bush full of barely opening buds, its branches were nearly bare. All that was left of the precious blooms were a few stragglers. Had he asked, she would have pointed him to a myriad of options — anything but the Osiria, but she herself had schooled her son in the language of flowers, and he had chosen well.

She sighed and began pruning the empty stalks. There was always next year. Yes, she would make sure that all of her roses looked their best by then. After all, a June wedding among the roses would be just perfect.