Hold Me Down (Just, Again)

Some clarity came back into Derek’s gaze. He licked his lips, breath picking up again for an entirely different reason. “Please.”

He said it again, softer, a crack in his voice.

Stiles could never deny Derek when he begged. 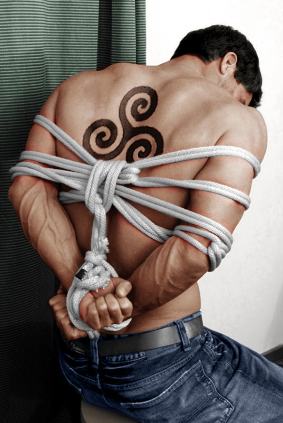 Stiles traced a finger along the taut line of Derek’s shoulders, brushing over the nape of his neck. Derek shuddered and bowed his head further. His breath was still coming fast, but not as fast as it had been when he’d shown up, eyes wild and pleading like they only ever were when the memories came back to him too strong to resist—memories of ash and tears and ruby red lips.

He hadn’t needed to ask for the ropes. They were a given by now, years after he had first tentatively suggested trying them out. It had barely taken a week for them both to realize just how deeply they affected Derek, how they dragged him out of his bad thoughts, how secure they made him feel in the moment.

He was getting there now, but it wasn’t quite enough.

Stiles circled back around to stand in front of him. With gentle but unyielding fingers, he tilted Derek’s head up. Derek blinked up at him through hazy, unfocused eyes. His bottom lip was plush and damp against the pad of Stiles’ thumb when he pushed it into Derek’s mouth, dragging his mouth open on the outstroke.

Some clarity came back into Derek’s gaze. He licked his lips, breath picking up again for an entirely different reason. “Please.”

He said it again, softer, a crack in his voice.

Stiles could never deny Derek when he begged.

It was the work of seconds to get his jeans open and shoved down around his thighs. Stiles gave himself a few lazy strokes—not enough to tease, he wasn’t that mean, but enough to have Derek pulling against his rope cuffs just a little—before giving Derek what he wanted.

His cock slotted into Derek’s waiting mouth like it was meant to be there. Some days, there was nothing Stiles wanted more than to just stay in Derek’s mouth, warm and slick and comfortable, for hours on end. Sometimes, Derek even obliged, though cockwarming was reserved for special occasions; he didn’t have the patience for it usually.

Even now, he was looking up at Stiles entreatingly, as if to ask why he was taking so long.

Derek made a noise in his throat. With years of experience, Stiles had no trouble translating it: I know you will.

The first thrust drove Stiles all the way into Derek’s throat, just how he liked. He gagged around the intrusion, but Stiles held him in place until the spasms stopped, shushing him softly.

When his throat finally relaxed, so did the rest of him. He coughed wetly when Stiles pulled out, but that didn’t stop him from chasing after him as best he could without losing his balance. Stiles hooked two fingers into the ropes around Derek’s chest and twisted, pulling the loops around his arms tight enough to bite.

“Uh-uh,” he said chidingly. “You take what I give you when I give it to you.”

Derek whined and then settled back obediently. A fine tremor ran through him, but his eyes were clear.

Stiles rewarded him with another deep thrust. He didn’t stay buried this time, though. Instead, he used his tight grip on Derek’s hair to fuck himself in and out of that eager mouth. Each gag and slurp was gratifyingly loud, even if they sometimes covered up the absolutely amazing whimpers that Derek let slip. Desperate, needy little noises that got Stiles hot like nothing else.

He pulled out before he could tip over the edge, gripping tight to the base of his dick to stave off his orgasm. Not just yet; he still needed one more thing.

Derek’s chest heaved against the ropes that crisscrossed it, face red and wet with spit and tears and the pre-cum that Stiles painted across his swollen lips. “Thank you,” he rasped.

Stiles petted his cheek appreciatively, but shook his head. “Not that. You know what I’m looking for.”

The sound of Derek’s swallow was clear, but he didn’t look away or duck his head like he used to when Stiles insisted on this. Even just a year ago, he would squirm and deflect and deny. Now, though, he just shuddered, hard, and said, “I deserve this.”

Stiles smiled. “That’s right, sweetheart. You’re doing so good.” He fed his cock back into Derek’s mouth for a few more strokes, pulling it out again to tap teasingly against his chin. “Again.”

“I deserve this. Stiles, please.”

There was that begging again, so pretty and perfect. Irresistible.

Besides, Derek had earned it.

Stiles stripped his cock hard and fast, the head just brushing Derek’s bottom lip. The force of his orgasm nearly knocked him on his ass, toes curling against the carpet and Derek’s name on his tongue. It overshot to paint Derek’s face with stripes of white, dotting his cheeks and catching in his eyelashes like pearls.

Derek took it all with a blissful sigh, the last of his tension seeping out of him to leave him slumped against Stiles’ legs. He nuzzled his sticky cheek against Stiles’ thigh, humming when Stiles’ fingers carded through his hair.

“You did good, baby,” Stiles murmured. “So, so good. Do you need anything?”

Despite the bulge still evident in Derek’s jeans, he shook his head. That was alright, and not uncommon; sex may have been the mechanism, but none of this was actually about sex. Not for him. Not on days like this.

“So you’re okay?” Stiles asked, palm settling warm and heavy on the back of Derek’s neck.