Road to All Things

Season Seven. Angst, tension, smut, and MSR. Leading up to All Things and finally Requiem

Chapter 1: As I Lay Dying 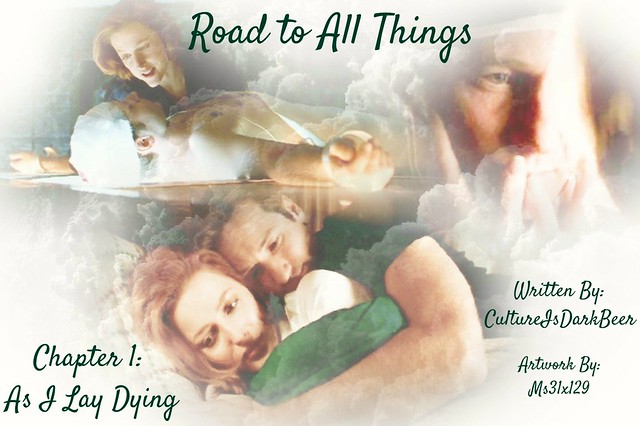 I laid with my arms around Scully holding her tight. Her back pressed firmly to my chest, separated by our own clothes and the comforter of another tired decaying motel room. I’m trying to stop her bout of chills. The irony of a man dying with mere weeks left to live, comforting a woman as if she was dying of hypothermia. Truthfully, I had made up my mind when I saw her holding the baby in her arms, the look in her eye, and the dawning realization of all I had taken away from her. All the years, all the promise, and now I would be leaving her behind to reveal the lie, the secret I’ve been keeping all along. I had nothing to offer her and as my life ended, hers needed to begin.

“It’s not worth it Scully.”

“No, no, I’ve been thinking about it. Looking at you tonight, holding that baby… knowing everything that’s been taken away from you. A chance for motherhood, and your health, and that maybe... I think that… I don’t know, maybe they’re right..”

I sent my hand across her forehead, my lips to her temple. She squeezed my hand in return. No matter what it took, I had to convince her to walk away. Like a premonition, or perhaps my own deep seeded fears, I wouldn’t risk her life. Not this time. I held her through the night. Inside me there was a storm of regret for a future that would never pass, of a torment she endured and continued because of a journey I would leave prematurely, although not premeditated. Our love would need to be left behind, dissolving into the Oregon woods. Much like the alien craft, intangible and invisible, but very much alive.

Nine months earlier in the hallway of Mulder’s apartment building...

“Scully, I was like you once, I didn’t know who to trust. Then I… I chose another path… another life, another fate, where I found my sister. The end of my world was unrecognizable and upside down. There was one thing that remained the same. You.. were my friend, and you told me the truth . Even when the world was falling apart, you were my constant… my touchstone .”

Mulder nodded his head in agreement. His heart, body, and mind grew to a realization of what his masterful soul spoke of in their truth.

The sun had set and the street lamp shone through his window, turning the blue glow of the fish tank to an emerald green. Mulder had spent the day lounging on the couch in a partial drug state from the meds given to him. The movies on the tv blissfully bled from one to the other. The hard knock on the door startled him from his dozing, his dreams wandering into the realms of his previous visions of another life. He would be lying if thoughts of Diana and her death hadn’t bled in as well. “Doors open!” he called out.

Scully meekly poked her head into the darkness of the apartment, the light from the hallway forming an angelic halo. “How’s the patient doing?” she asked as her deep red hair bustled by him.

“Better, Doc,” Mulder returned, even though his last dose of meds had worn off and his head was still throbbing. He propped himself higher on the couch. “How’s the office without me?”

“Much bigger than it used to be.” Scully set down her briefcase seemingly amusing herself. “And neater.”

Mulder nodded. “I bet.” He made a conscious effort not to tilt his head when she bent over, but he didn’t stop his eyes from taking in the highlight of her violet slacks fondling her ass.

He played the dutiful patient as Scully carefully unwrapped his bandages, only flinching once. The dried blood from a stitch had glued the cotton to his skin as she roughly ripped it away. In one of his magazines he once read that women with red hair were more likely to be into bondage and kink. As they shared a longing glare he wondered if pieces of that bled through into her patient care.

“The stitches look good, any dizziness, nausea, trouble seeing?” she asked, leaning over him gently, touching his forehead to exam the incision area. Even that simple touch sent flames throughout his body and he wanted nothing more than to wrap his hand around her wrist and pull her down towards his lips. The recent brush with death was different than the other times. Perhaps because she flew all the way to Africa for his beliefs, or that she risked her life and career again, or maybe part of loving the life he lived included loving her. He swallowed his urge to kiss her with great difficulty. When she returned his gaze, the raging seas inside her irises crested and twisted at his heart. How did he convince them to roll the tide his way?

“I brought you dinner. I figured you’d need something a little more nutritious than hot dogs and mac and cheese.” Scully broke their stare and pulled from a bag two small containers. “Homemade General Tso’s chicken,” she joked.

He gave her a fake smile, but inside he was slightly disappointed. Once she had him over for a spaghetti dinner. It wasn’t her mother’s cooking, but not too shabby either.

Their meal was unusually quiet. Mulder wasn’t really that hungry. His mind kept wandering to a place it had never been before and he wondered what ill effects the surgery really had on his brain. All he could imagine was his head between her legs making her come so hard she wouldn’t be able to walk tomorrow and would be forced to spend the day in bed with him.

“How long until I can be cleared to return to work?” he asked her.

Scully dabbed at the corner of her mouth with the napkin. She even dabbed adorable. “You’ve got to give it a little time Mulder,” she returned.

“There’s no difference sitting on this couch or in the office,” he shot back.

If her demeanor wasn’t enough to show her discontent she added, “I should probably go, you need your rest.”

“Don’t go.” He hated it as soon as it left his lips. Admitting the loneliness had gotten the best of him. It sounded desperate, almost helpless. “Watch a movie with me.”

“Okay,” she answered softly. He wasn't sure if it was a pity thing, but he’d take it. Since they had confessed their vows in the hallway there was a new intimacy born yet a distance from the depth of that same intimacy. It was stronger now, at such a late hour.

She put away the food and when she sat down he got a good sniff of her vanilla lavender scent. The real thing, not some lab created synthetic. The temptation was severe, but he dared not take another breath. There were so many things for them to talk about, but she silenced the urge when her hand seared his flesh with a casual touch to his leg. If there was ever a way to convince him he had left his dream state and survived, it was how her touch made him come alive; but if she moved that hand any higher, rigamortis might still set in.

Very comfortably, like they had rode tricycles together when they were three, she leaned her head against his shoulder, exposing the graceful line of her neck. Before he could deter himself, he pressed his lips to her forehead and tasted her sweet skin.

Like a vision of the future that was now in their grasp, he imagined himself unzipping her slacks and sliding his hand inside . When he reached the delicate lace of her panties, the one he had only seen the outline of once or twice, he’d slowly run his finger over the fabric.

He closed his eyes and flexed his foot so he wouldn’t groan. His body pulsed with need for a physical connection to match the one within.

Somehow, he knew when he did, she would be soaked for him. Then he’d push her panties to the side, and take his time, getting intimate with every bump and fold as he sucked and nibbled at her ear.

As if on cue, Scully crossed her legs, almost creating a barrier for his imagery, but in his illusion s he ground her hips when his finger discovered that deep spot inside her. He’d tell her to close her eyes as she whispered his name.

The pleasure from the thought shot up his spine. He shifted in the couch cushion. These musings were making him hard and he didn’t want her to notice. Instead, Scully scooted closer, getting comfortable under his arm draped along the top of the couch.

The move so graceful, he pictured her body gliding in time with his finger buried inside.

Scully lifted her head and locked their gaze and it felt as if she played in his thoughts. His imagination feeling her fingernails digging deep into his skin, asking him to move faster. He’d do that and more, giving her clit ample attention with his thumb as his fingers did their work.

Scully gripped his hand and he almost jumped. Their gaze locked and he realized her chest was moving in short pants. His mouth went dry. In his mind’s eye he was leaning into her and whispering to her, “just let go, Scully.”

They stared at each other until finally she found her voice. “I, I need to use the restroom.” She got up swiftly and left him cold, hard, and alone- with two throbbing heads.

Mulder woke at Scully’s prodding, feeding him his medication. He gulped down the water and stumbled into his bedroom as she led him from the couch into the dark. She removed her shoes, but kept her clothes on. Her in his bed was an unusual move, but he knew secretly she was concerned with his healing. In this way, he knew logically, she felt she could provide immediate attention if he took a turn for the worse. There in the darkness they started on separate sides, him on his back and her facing the wall, until eventually, he slowly got up the nerve to mold his body to hers. They clasped each other in a warm, slow luxurious hug and all opposition melted. His chest rose and fell against her back, their breaths in unison. Usually only in times of extreme stress and heartache did they find themselves in each other’s arms, but tonight he believed it was because of all they had shared. He had read her mind, her feelings. He knew the severity and the depth of her love. Even if he thought he knew before, now he felt it in his own heart and mind. His arms wrapped around her brought him the peace he had only known with her, calming the storms in his heart. She gave fire to his hope and water to extinguish fears, a sun to enlighten days, and a moon to reflect her light into his darkness. A bright star even in empty skies. This, laying with her, was the only medicine he needed.

Or was it? He felt reborn. Happy even. And he wasn’t going to deprive himself of what he wanted. It was time. He just had to tell her.