Sid just shrugged, cuz what else is there to say. Thanks, no prob, I’ve always wanted to fuck a robot myself…? Pleasure’s mine…? Nah.

look sometimes your friends are just like [REBLOGS POST ONTO YOUR DASH THAT U HAVE TO LOOK AT WITH YR EYES] and then yr like mmhm. i fuckin. seE THAT. and then it becomes a fic because neither of you know how to shut your mouths and it's just a bad ideas sounding board in here alright 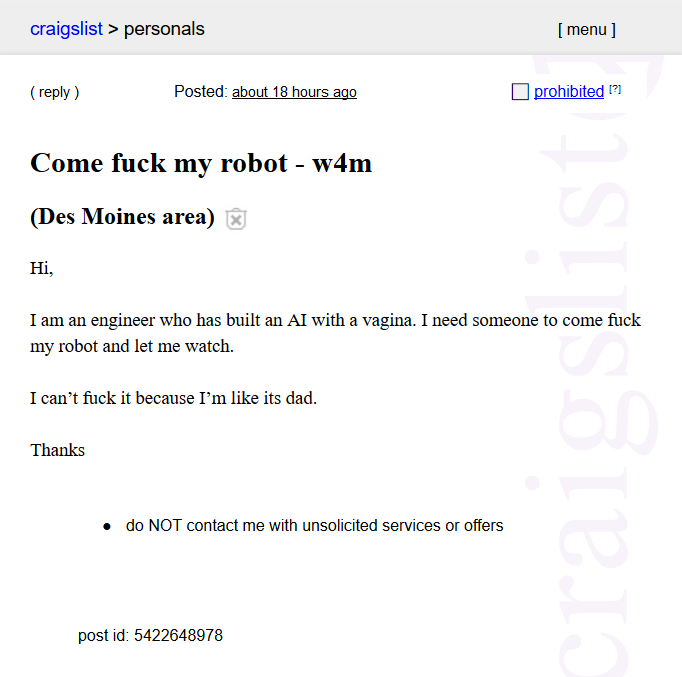 Maybe Sid watched too much Transformers growing up, and that’s how he got here. Some weird dude’s garage out in the middle of nowhere, bare ass glinting for the camera, shorts around his ankles & still wearing shoes, smearing lube onto his cock which--unfortunately--is ready to fuckin’ go.

There’s certain things he doesn’t want to try to unpack too far, like the fact that there’s an old dude hovering just out of his peripheral vision, getting drunk in the middle of a Sunday afternoon, smoking cigarettes in a dirty recliner. Or the fact that he’s got a camera pointed at his ass. Or that there was a pump bottle of preheated lube waiting for him but not much else in the way of pleasantries. Just a handshake & a nod & “name’s Shawn,” and that y’know, even though he’s not small or anything, his hand still felt small in Shawn’s grip. “Robot’s in here.”

And y’know, there was that. His mouth mighta dropped open a little cuz she--it--was just splayed across what was definitely a dining room table covered in beach towels, ready to go. And it was like ninety degrees out and the window A/C jammed into a hole in the wall was doing basically fuck-all, even when Shawn rolled the door back shut to block out the sun and keep the illusion of cold air in while Sid stared up at a chunk of pipe bolted between two rafters, not connected to anything. Y’know. Just the two of them and this robot spread out on the table under the shitty fluorescent lights, nothing but a skimpy halter top and a g-string keeping it from being naked as the day it was born.

“Yeah, but that doesn’t mean anything,” Shawn said, dropping into the recliner with a grunt and producing a pack of cigarettes from his pocket, putting one between his lips then pausing, pulling it back out, tapping it on his knee and looking up at Sid. “Cool if I smoke?”

“Not trying to make you uncomfortable, you’re doing me a solid.”

Sid just shrugged, cuz what else is there to say. Thanks, no prob, I’ve always wanted to fuck a robot myself…? Pleasure’s mine…? Nah.

And y’know, Sid’s never fucked another dude’s vagina robot so he’s not sure what the etiquette is but he stripped off his shirt and threw it at an empty workbench, stepping up to slide his hands along the robot’s tight stomach. It let out a soft giggle, sound of actuators & gears whirring in the background. A little jerky, but. A robot. To fuck.

“Christine,” Shawn said, tapping ash onto the grimy cement floor. “Hey, is it cool if I tape this?”

And y’know, he was a little preoccupied with actual robot titties right in his fuckin’ face so yeah, sure, whatever man no problem. Which. The titties were awesome, the way the robot--Christine--moaned when he sucked on them (a little mechanical, a little tinny, a little bit far-away) was even better, and then it wasn’t long before he was kicking his jeans across the room and pulling her--it, Christine, whatever--closer to him with a hand on the back of her neck, licking into her mouth, smearing a kiss across her lips with a hand around his own cock, working himself as much as he could inside his boxers.

“Fuck,” Sid groaned, faceplanting back into robot tits when he shoved his boxers down far enough to jerk off in earnest, slide a little too dry to be good. “You got--?”

“Lube? Yeah, ‘s right there…” Shawn’s voice was a low rumble somewhere in the background, like river rocks falling on concrete.

And that’s how Sid got here, pumping lube from some horrible little pot contraption that looks like the thing his ma puts beanie weenies in at the Superbowl party except, y’know, full of lube. It’s warm and he shudders up into his fist a little, even though it’s still hot enough in the garage that it feels like he’s breathing through a wet blanket, the robot’s silicone skin slick with his sweat and his spit where he pulled the g-string to the side and licked over her--its, fucking whatever--clit, figuring out what would make her fucking hydraulics spin, the sound of pistons and plates cutting under her programmed moans in a way he’s really fuckin’ into. He barely even notices the words coming out of his own mouth, under his breath all fuck yeah baby and come to papi when he goes to slide in, cooing comfortingly when he misses and almost nails her ass like shit. Sorry.

And y’know, it feels like a Fleshlight, more or less. Maybe a little warmer but y’know, there’s mechanics and shit in there & it’s hot in the garage so it only makes sense. Mick’s got this blowjob machine he paid mad money for & left unattended on a week out of town so obviously, Sid stuck his dick in that, and it feels sorta like that but y’know, despite looking like a toaster that thing was pretty fuckin’ awesome. Like he busted in that thing for a week straight and went to work walking funny because he could not stop sticking his dick in it. Like, he had to look up “dick repetitive stress injuries” cuz he could feel his soul leaving his body.

“Fuck. Jesus--fuck, yeah--god--” he’s gritting out through clenched teeth, and he almost forgets he has an audience and there’s a camera pointed at his ass until Shawn laughs softly, shifting in his chair. Sid can hear the ice clinking in his glass, the springs groaning under his weight.

“You’re sure you like pussy, huh?” he teases in a way that feels way too close for somebody Sid just met twenty minutes ago.

“Don’t mind me,” Shawn mutters and suddenly there are hands on Sid’s hips, Jack Daniels breath on the back of his neck, curls sticking with sweat & humidity. “Pretend I’m not even here.”

Sid’s never had a threesome before and he’s not sure if this counts, his hands all full of robot titties and this big sweaty dude pressed into his back, rubbing an obvious boner up against Sid’s bare ass through his jeans, his hands trailing down to press against Sid’s stomach & he gasps, hips snapping forward while he melts into the contact; lets himself be held. Shawn’s biting at his fuckin’ neck, kissing along his bare shoulders, his breath stickyhot & sweet when it curls along his ear. “Yeah, fuck, how’s she feel?” he asks quietly. “You gonna let her milk your cock?”

It’s sort of like getting punched in the chest. He can barely breathe, much less fuckin’ think, balls deep in a goddamn robot with a strong arm wrapped around his waist and Shawn nipping at his fuckin’ skin, rocking his hips into Sid’s ass like he’s trying to fuck him through the table, through the robot, into another dimension. “Fuck,” he chokes, hoping that gets his point across cuz that’s all he can do, the only thing he can think loud enough to drown out the ringing in his ears and Christine’s mechanical breathy moans all porn-star practiced and just this side of uncanny.

But then Shawn says “yeah, good boy” all low and breathy in his ear & Sid’s not paying attention to the fuckin’ robot anymore.

“Shit,” he gasps, tilting his head back into Shawn’s shoulder & closing his eyes when Shawn’s hand comes up hot & strong to wrap around his throat. Not squeezing, just holding. Keeping him wedged in place, letting up just enough to let Sid maneuver a hand down to palm his cock through his jeans and practically purring at the contact, laving open-mouth kisses into the side of his neck.

“Somebody’s a greedy slut,” Shawn chuckles, squeezing just enough to trap Sid’s moan at the words in his throat. “Bet you’d like if I plowed you through this fuckin’ table…”

Sid can’t decide if it’s a threat or a promise or a question but he's nodding anyway, mouth all dry, and when he glances down to where his cock’s stretching Christine open--cuz he’s still fucking the robot--Shawn’s got his fingers there, thumbing over her clit--its clit--making her, it, Christine, whatever moan louder and bite at her own lips in an artificial way, gears flapping but then his hand’s gone just as quick and there’s lube-slick fingertips trailing over Sid’s entrance, just teasing & he practically fucking chokes, dropping forward to white-knuckle against the table.

He sounds crazy, desperate, fucked-up--the whole thing’s fuckin’ crazy--and Shawn doesn’t answer, just bites into where his neck meets his shoulder and fucking latches on, all teeth and tongue and it’s like being eaten alive; the smell of burnt 2-stroke oil and sweat, cigarettes & whiskey & gasoline pushing into his back, flooding, short-circuiting. Too hot, too humid, arm held strong around his waist and fingers stroking up his ass, peeling him apart, air sticky with mechanical moans & then something animal, jungle noises, Shawn’s finger sinking into him easy and he’s coming the fuck apart, blowing his load deep in Christine’s robopussy & it’s only when he seizes up in Shawn’s arms that he realizes the sounds are him, these big ugly shocked gasps when he nuts so hard his legs start fucking trembling and Shawn moaning softly in his fucking ear like it was hard enough for both of them. Whiskey breath washing over his skin.

And then it’s quiet. Just Shawn and Sid and the air conditioner rattling all metallically. Shawn kisses the spot behind Sid's ear. His mouth is soft, a little chapped; the way his beard drags on Sid's sweaty skin makes all his nerves light up at once like his whole fucking neck goes numb. Like a horsefly getting him, but it feels good. So good.

“Holy shit dude.” His voice doesn’t even sound real, even in his own head he sounds far-away like he blacked out for just a second and is trying to swim back up.

All Shawn says is, “you’re fucking hot” and kisses his neck again & Sid just nods, fucked too stupid to say anything. He’s happy for Shawn’s arm around his waist cuz without it he’d probably be on the floor, he nutted so hard. The force of the blast woulda blown him across the room like an action movie. Fuckin’ Reservoir Dogs shit.

Shawn shuffles around a little, gently releasing his grip on Sid to adjust his dick in his pants. “You good?”

His head feels like it’s full of bees and he’s pretty sure he doesn’t say that out loud but maybe he does cuz Shawn barks a gruff laugh, dropping back into his shitty recliner to light another cigarette and leaving Sid whole bootyass out over the edge of the table, too fucked out to go anywhere. He puts his head down in the robot’s titties, face smearing through sweat & drool. The room is spinning. “Whooooooooooo buddy--”

Shawn laughs again, sticking his cigarette back in his mouth & pulling the camera off the tripod, mashing buttons. Sid can hear his own moan loop out of the speaker, quiet & distorted, muffled by Shawn’s hand. He mashes more buttons and it loops back, playing out again and again and again--the metallic squeak of robot parts and Sid breaking, coming so hard his brain explodes.