“You caught me,” Alexis said, starting up at him with wide, blue eyes. He held her in his, shockingly steady, arms. His heart pounded against his chest.
“I’ll always catch you,” David said emphatically. It was his job to be there when she needed him.
“Promise?” Her voice was still a little shaky.
“Promise,” he said without hesitation. David set her on her feet, smoothing his hands over her shoulders. “Ready to try again?”

Written as a stand alone

Thank you for all of your lovely feedback on the last fic. This idea came out of a comment, so I always welcome ideas and input.

Title from Count On Me by Bruno Mars 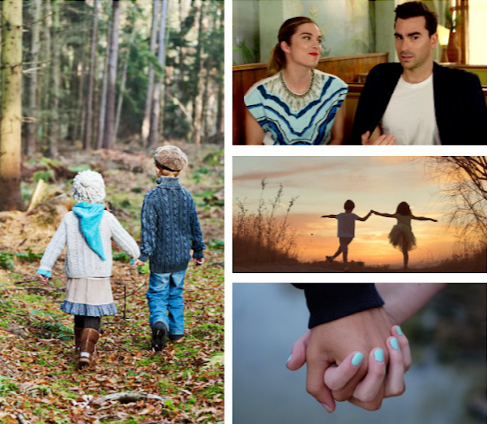 David found Alexis at a bend in the stream. Her face lit up when she saw him. Curly tendrils of dark hair had escaped her braids. Her dress was muddy at the hem, a rip in her stockings. An old pair of his converse lay abandoned at the edge of the water, her feet bare.

One of the groundskeepers had seen her wander into the forest beyond the south lawn.  They had nannies, but they were actively discouraged from keeping a close eye on them.

"A watched cauldron never boils," Moira had said, holding David's cheeks in her hands. She turned his head side to side, inspecting him as if he were a prospective piece of art. "Oh, David," her eyes bore into his, "what a fine young witch you make. My bébé boy." She broke away, leaving as quickly as she came. "Run along, now. There is much to be learned out in the great yonder."

They were supposed to be meeting with their Latin tutor, but Alexis skipped it when she didn't feel like going. She had a far better ear for languages and David always learned faster when he didn't have half a mind focused on worrying over where she was.

"David," Alexis called, nearly tumbling into the water as she stepped from stone to stone to get back to him. The stream was low, but wide. A series of sunken stones and downed trees bridging the gap.

"Hi Bluebell," he wrapped his arms around her shoulders as she barreled into him. Alexis had tied her braids together with the thick cream ribbon. He had sewn small silver bells along the edges last week and they rang, soft and clear, through the woods. "We have Latin soon," he said, tucking a loose strand of hair behind her ear. "What are we doing out here?"

Alexis tipped her head back to look at him, "The birds finally left their nest!" She stepped away to point across the river. She had been diligently monitoring a clutch of Robins, their pale blue shells calling to her long before they gave way to small, chirping birds. “I want to collect the shells and their soft little baby feathers.”

Alexis turned back to look at him, crinkling her nose. The summer sun had left a spray of freckles across her cheeks. David hoped they didn’t disappear as autumn blew in; they were endlessly charming. “Will you get it for me?” Alexis asked, “I can’t get across.” She gestured to the path through the stream.

“Um, no,” David said. He scaled a small hill to settle cross legged on a wide, flat rock. “You can get it yourself.”  He would help her if she truly needed it, but she didn’t. She was just used to getting her way.

“Alexis,” David replied calmly, flipping open his Latin text. “You are perfectly capable of crossing the steam on your own.” He glanced up. Alexis had her hands on her hips, mouth turned down in an approximation of a pout. “I’m not always going to be there to do things for you. You need to learn to do them on your own.”

"And why not, David?” she asked, “Where are you going, hmm?" David heard the sound of his mother's heels clacking on the foyer, his father's office door closing. Nowhere. I’m right here. You’re the one who’s going to leave me.

"You're stalling," he said, gesturing pointedly at the rocks.

“Fine,” Alexis huffed, toes digging into the earth. She had a defiant set to her shoulders, tilting her head as she studied the water.

David watched her step on a wobbly log for the fifth time in a row. It would get her closer to the next rock, but it hadn’t set properly in the bed of the stream. There was one a few feet away that was sturdier.

“Try the other one,” he said as she flung her arms out for balance. Alexis looked back at him skeptically, but did as he suggested. He set the textbook in his bag and scooped up her shoes, following her across with deft movements.

“You could do that the whole time,” Alexis said, scowling as she took her shoes. She knelt down to tie them with agitated motions.

“Yes,” David bit back a laugh at the indignant crinkle in her forehead, “and now you can too.”

“Okay, but, can you just climb the tree for me?” Alexis asked, eyes drafting up to the next. She bit her lip, looking scared, and that wasn’t right. Alexis was the most reckless, fearless person he knew.

“Nope,” David said, “if I have to miss Latin for this, you’re getting the nest yourself.”

He slid a courage charm from his bag; twin cinnamon sticks wrapped in twine, “Here, I made it with mom. It’ll make you brave.” It was supposed to anyway. David had never felt particularly courageous, but Alexis didn’t need to know that. She held out her wrist and he tied it on.

Alexis scrunched up her nose. "I don't feel any braver."

"You have to choose to," David said, "that's all magic is, intention. You have to want it to work."

"It didn't look so far up before," Alexis said, tipping her head back to look up the tree. "It's scary high, David."

"Good," David followed her gaze. It was pretty high up, but there were a good number of branches. She was light enough that they would hold her, "then you'll be careful."

"Alexis," he repeated in the same whiny tone. "Be scared then," he said seriously. "Choose to do it anyway." He was a little scared for her, if he were being honest. He dug his fingernails into his hands to keep from stopping her. She could do it for herself; it was important that she knew that.

"Oh." Alexis looked as if the idea hadn't occurred to her. “Okay.” She reached for the lowest branch, a line of determination between her brows. He wondered if she knew she was floating, hovering in mid air for a fraction of a second, as she made the leap up to grab hold of it.

She wasn’t so lucky with the second, worn rubber soles slipping against the trunk of the tree. David watched, with slow mounting horror, as her fingers unwound from their hold one by one. He had never moved faster in his life.

“You caught me,” Alexis said, starting up at him with wide, blue eyes. He held her in his, shockingly steady, arms. His heart pounded against his chest.

“I’ll always catch you,” David said emphatically. It was his job to be there when she needed him.

“Promise?” Her voice was still a little shaky.

“Promise,” he said without hesitation. David set her on her feet, smoothing his hands over her shoulders. “Ready to try again?”

“You’re stalling,” David said with a teasing grin. She rolled her eyes, turning to reach for the branch. He had the feeling Alexis would fall again, but he would always be there before she could hit the ground.

Thank you very much for reading!!
❤️ Sunset