Scars on your Soul

After the reveal of her soulmate’s identity, Hermione tries to cope with the pain of heartbreak. She finds solace in a past conversation with Professor McGonagall about soulmates, the Fates, and her true destiny.

While this is part of the "Fate and Free Will"-Soulmate-Series, it can be read as a standalone. 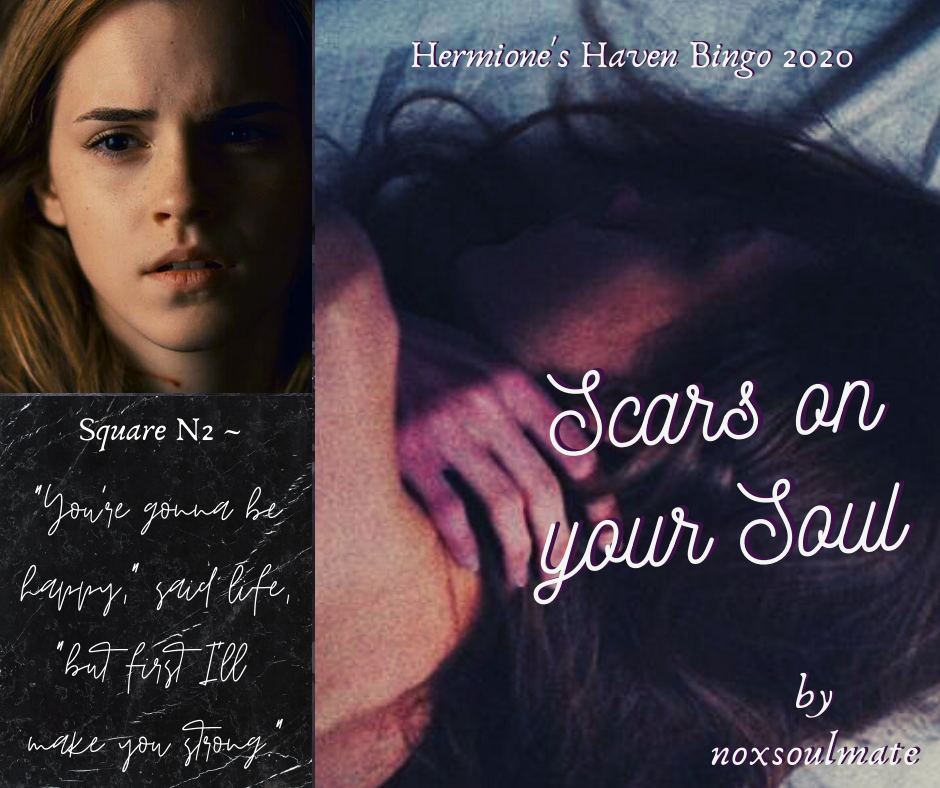 The voices in her living room were faint, a constant buzzing that wouldn’t go away.

She was fine though.

Turning around in her bed, Hermione looked at the small stripe of bright sunlight making its way through her curtains.

Aggressively, Hermione pulled one of her pillows over her head, pressing it to her ears. If only McGonagall’s voice would shut up and leave her in peace. But no. No, instead it kept repeating all these words her professor had told her during their heart to heart over a decade ago.

Yes, maybe in twenty years, she would have regretted not getting to know Dean.

Right now though, she wished for nothing more than to forget about him.

Forget about his smile.

Forget about his green eyes.

Forget about his freckles.

His lips and his strong arms.

His laughter and his voice.

His warmth and his fragrance.

Letting go of the pillow, Hermione wiped away a tear. She had no idea how she still had some left - so sure they had run dry days ago.

This will leave a scar on your soul.

Oh, how right McGonagall had been, even though her professor had been talking about her mark, not her soulmate. But really, weren’t they two halves of a whole anyway?

Broken hearts can be mended.

As she traced her letters again - as black as they had been the day they appeared, no trace left of the temporary fading - Hermione wondered when that would be.

When would she overcome this?

How could she overcome this?

Some part of her, deep down, knew that, if it had been just any other guy, Hermione would have had a good cry over a broken heart, a pint of ice cream and a good movie, maybe even some time off with her friends, depending on how much she had liked the guy, and then she would have been as good as new. As right as rain.

Somehow, though, Dean simply was not so easy to get over.

Then again… maybe it wasn’t even Dean. Maybe it was the fact that she had met her soulmate - the man destined to be her other half.

Most likely, that was exactly the problem. Surely, all she needed to do was stop putting so much weight into what the Fates thought was best. See Dean as what she had always thought him to be.

Just some random stranger she had picked up in a bar.

Now there was a novel thought. Certainly, this could be counted as progress after her days of wallowing?

Some soulmates are meant to show us that we can grow stronger and can overcome just about anything.

Once again, it seemed McGonagall had been right.

For her, meeting her soulmate had never been about finding love and a happy ending. For her, it had always been about growing stronger. About getting her heart broken and scarred - and overcoming such pain. She had been through so much in her life already, had overcome so much darkness and pain and sorrow; she would overcome this too!

Eventually, her heart would mend and her soul would heal.

Dean would fade into a memory.

One she would someday be able to draw strength from.

One day, you will find your destiny.

Yes, she would. Maybe she wasn’t meant to be in a loving relationship. Maybe she was meant for something else. She already was devoted to a greater cause, after all. They had caught Dolohov, but he certainly wasn’t the last dark wizard to walk this earth.

And it was Dean who had reminded her of this!

Maybe… maybe that had been the deeper meaning behind letting this man into her life. That he would remind her that while there were good creatures, there were also dark ones. He had reminded her that Death Eaters were not the only evil - and Hermione had a lot of work to do if she wanted to start hunting down the demonic entities that had made their way into this world.

Sitting up in bed, Hermione wiped away the last of her tears. It was time to stop wallowing in self-pity and get back to her normal life. Back to work, back to her destiny. She got up and picked some comfortable clothes before making her way to the bathroom. Only after she had cleaned up did she risk a gaze into the mirror.

She looked ashen, eyes red-rimmed, and her cheeks were sunken in a bit. No matter how much Harry and Theo had tried to make her eat, it had obviously not been enough. She owed the two men an apology. To not scare them, she put on a tad of makeup, just enough to not have her look like she had just been raised from the grave.

When she was done, she stared at her reflection for a moment longer.

“One day, you will be happy, Hermione. Trust in that. You have a bright future ahead of you, and the Fates have no say in your happiness. You are in control of that!”

She had followed these words once, and she would again. McGonagall had been right.

No one had a say in her happiness but herself!

She had already found her destiny and one day, she would find happiness again.

Until then, she had a job to do.

Squaring her shoulders and lifting her chin, Hermione locked away the memories of Dean Winchester. With one last glance and a nod at her reflection, she left her bathroom and the bedroom, and stepped back into her living room.

Back into her life; her destiny; her future.

This still isn't the end, I promise you this. And the next part is already partially written...

All my love to LunaRavenclaw9 for beating and generally supporting me in this 😘
And of course to ArielSakura, for anything and everything 💖