Art for WIP Big Bang 2020, for a story by nagi_schwarz

It always surprises me how a friend or a fic can make me fall in love with a new fandom :) In the case of Astro, the WIPBB challenge was just the continuation of what nagi_schwarz had started, and I was more than happy to do art for her wonderful fic as I had already come to love the band, the boys, and their music ^_^

Here's a link to the fic: music (when soft voices die)

Note: The art contains quotes from the story which are mild spoilers about certain things, but nothing major.

When I first contacted Nagi about what she would like to see in the art, she only had a few small requests: a picture of Minhyuk and Myungjun together, and also maybe a picture of Eunwoo looking badass :) I did my best to grant her wishes ^_^

The pieces have two versions, one without text, and one with a quote from the story that inspired the art, or in case of the title banner, the name of the fic and such. I have included links to the fullsized textless pieces, just so you can see all the details if you want :)

I started out with the title image, since the main idea for it was the clearest in my head—Myunjung and Minhuyk looking at each other, with some sort of music related things in the background, since music was a big part of the characters lives and identity. The music elements became more abstract along the way, and the dark pink wave parts turned into a unifying decoration that I put in all the art pieces. I also used the title banner's strongest colours blue and pink in the other pieces as well, to tie them together better.

For the title font I chose something that hopefully looks modern and clear, yet also somehow soft without being curly, if that makes any sense :)

While doing the title banner I read through the story snippets I got several times, and certain scenes inspired me to do a single character image for both for Myungjun and Minhuyk. I used the blue colour to give them a feel of being a pair even though they are separate. I also used the same decorative elements I had in the title in both pictures.

For Minhuyk I found a really good picture that had the sense of what I imagined him to feel in the scene, a little lonely even though he wasn't alone, worried about what could happen. The tricky bit was turning the hair from brown to pink :D I was also working on the picture of Myungjun at the same time, and knowing he had a silver pendant in the shape of a leaf of some sort, I decided to use some kind of plant decoration for both images. For Minhuyk it ended up being a ginko leaf, since I read somewhere that it can represent duality, and that was something his character had in the story—a power that could both heal and harm. The quote in his picture relates to that power. 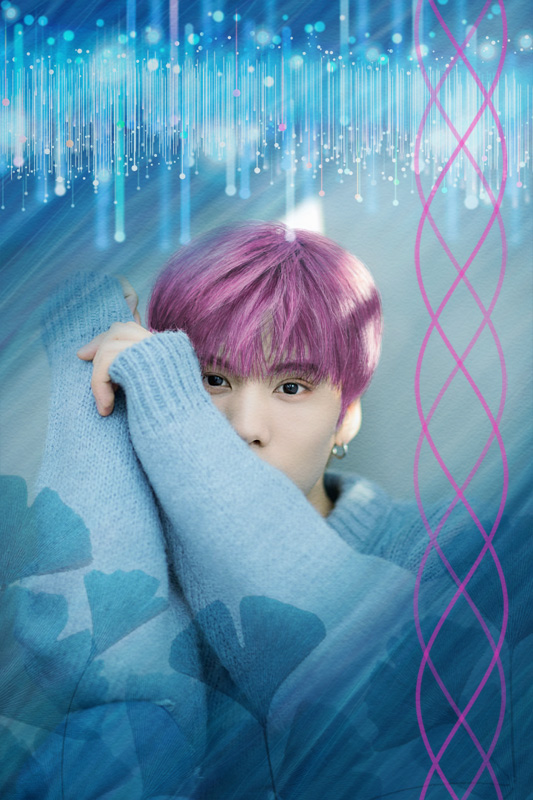 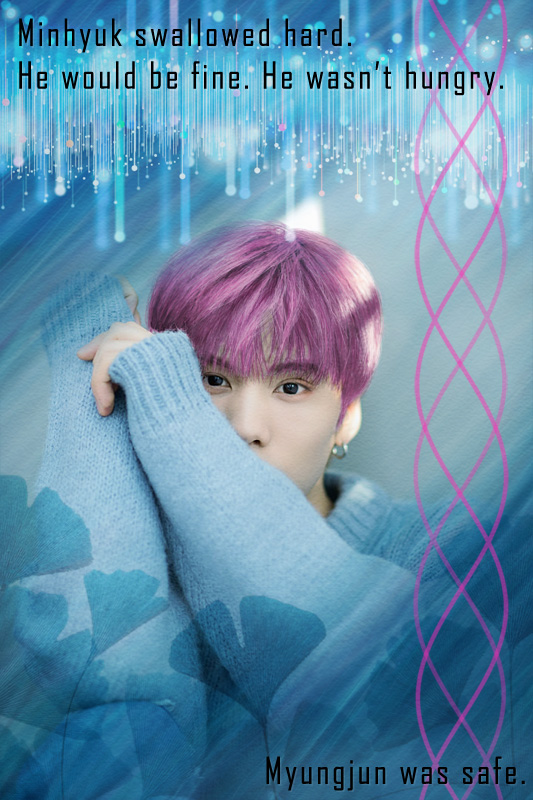 Finding a suitable pic for Myungjun was harder, but I found one that had the expression I wanted, but it needed some editing. In the original promo pic Myungjun had coloured contacts, lighter hair, and much more dangly chains for jewellery :) I also hid some of the makeup to give him a more natural look.

For the leaf necklace, and the decoration for his image, I chose a Monstera deliciosa leaf, at first because I think it looks pretty, but later I found that the plant can actually produce sweet tasting fruit :) And what is Myungjun if not beautiful and sweet, including his voice when he sings, and for a song-eater it must be very tempting. The quote in his picture relates to the necklace he wears. 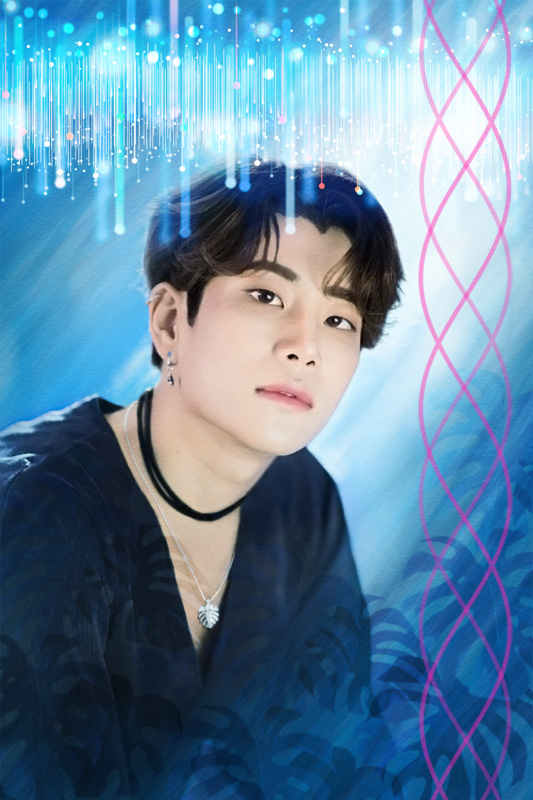 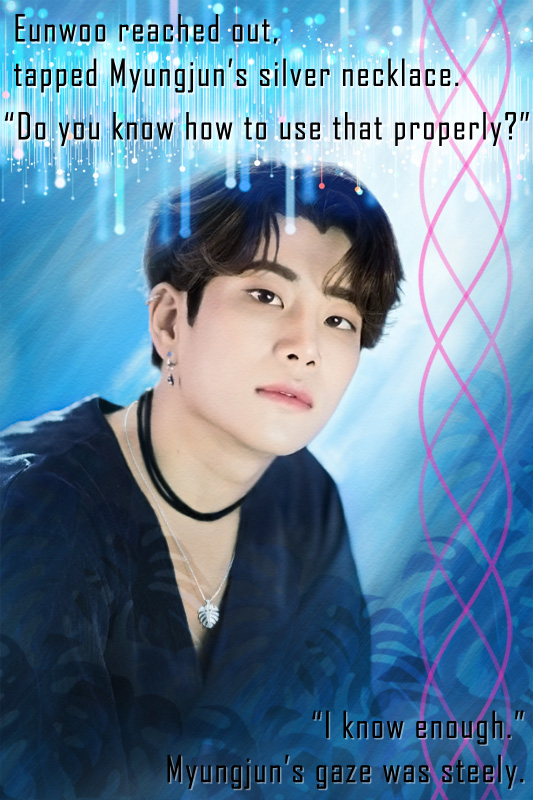 While doing all that I also got an idea for another picture with Myungjun and Minhuyk together, something softer and with a lighter, happier feel than the single images. And that's how this image came to be :) The flowers are plum blossoms, which I read in a lot of Asian countries signal the arrival of spring, which I in my mind linked with the decision of the quote from the story—to go forward without regrets, as if having a new start after everything.

Last but not least, badass Eunwoo :) I definitely had a lot of trouble finding a source image where looks more stern, since he is always smiling so sweetly or just looking stunning. But this is my best effort at giving him a sharp edge, pun intended :) The songbirds actually have hidden weapons, and Nagi told me for Eunwoo it's a long dagger, so I wanted to include that in the art. The one I used for inspiration (though it has been edited from its original form) was a picture of a real Korean dagger that I found online.

For Eunwoo, I used pink and purplish hues, and for his plant motif I used a rose, which is classic for being a beauty with thorns. In this story that seemed to fit Eunwoo and his role as a songbird, as the story quote reveals. 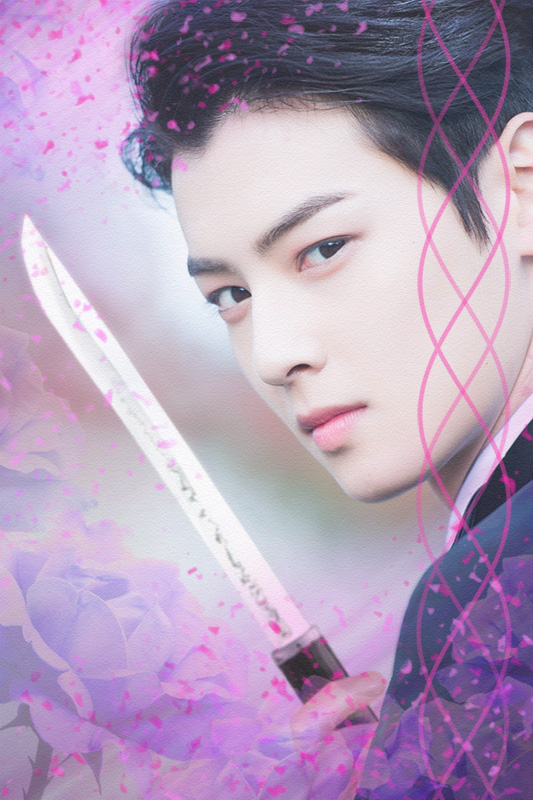 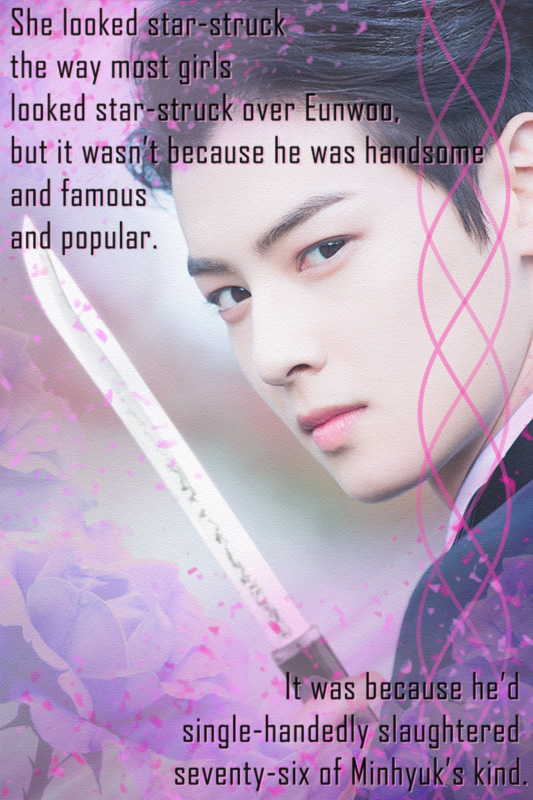 Making the all the art was such a good challenge but also a lot of fun, and I truly enjoyed getting into a new fandom :) I hope it shows in the pictures, as well as how much I was hooked by the world Nagi had created. Please go read her story and leave it lots of love! ^_^