A series of Dramione drabbles written for Dramione Last Drabble Writer Standing - Round 2. The theme for Round 2 was Constellations.

Chapter 1: The Price of Looking 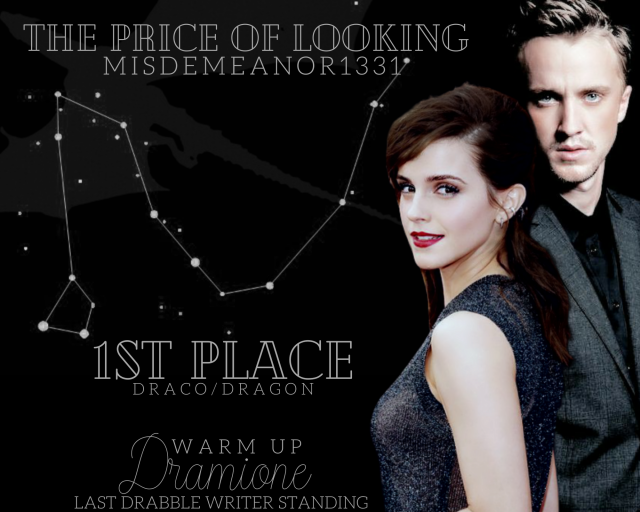 The Price of Looking

Draco Malfoy shoved open the Astronomy Tower door, nausea rolling like a loose stone in his gut. He made it to the railing, gripped the cold iron with both hands, and retched over the side.

Another failure. He would never fix the cabinet in time. He and his family were as good as dead.

Hermione Granger looked up from her telescope, a quill in one hand, her Astronomy homework on a conjured table beside her.

He wiped his mouth on his sleeve. “Sod off.”

She frowned, narrowed assessing eyes. Then, she backed off the telescope. “Take a look.”

Draco hesitated. Nothing was given without a price, but he’d have to pay one soon enough, anyway. Damned in either direction.

He looked through the lens.

Hermione had increased the magnification, applied the infrared charm Sinistra had taught them, and located a nebula: elliptical, woven with blue and gold light, and haloed by a web of orange-tinted stardust. Its overlapping gas rings created a central iris, which stared at him from across the universe. Passing judgment. Delivering a stark reminder of his insignificance.

He stood from the eyepiece to glare up at his namesake, which stretched across the northern sky. Hermione traced the constellation’s shape with her finger.

“He’s curled around it, almost protective. Like he’s guarding a golden apple from the Hesperides’ garden.”

“Protective.” Draco’s lips curled at the bitter taste of it. Unbearably ironic, too, given the mythology. “Some job he did. The dragon failed. He was slain by Heracles.”

“Only in some versions.”

Her tone gave it away. What she knew, what she suspected… Neither mattered, if the alternative she offered was sincere.

The price of looking. One he was willing to pay.

She stepped close and looked up at him, her eyes shining with starlight. Ever since they’d met, a galaxy’s worth of distance had separated them. Hermione bridged all of it with a hand on his arm and a simple request: