“You have nothing to win.” 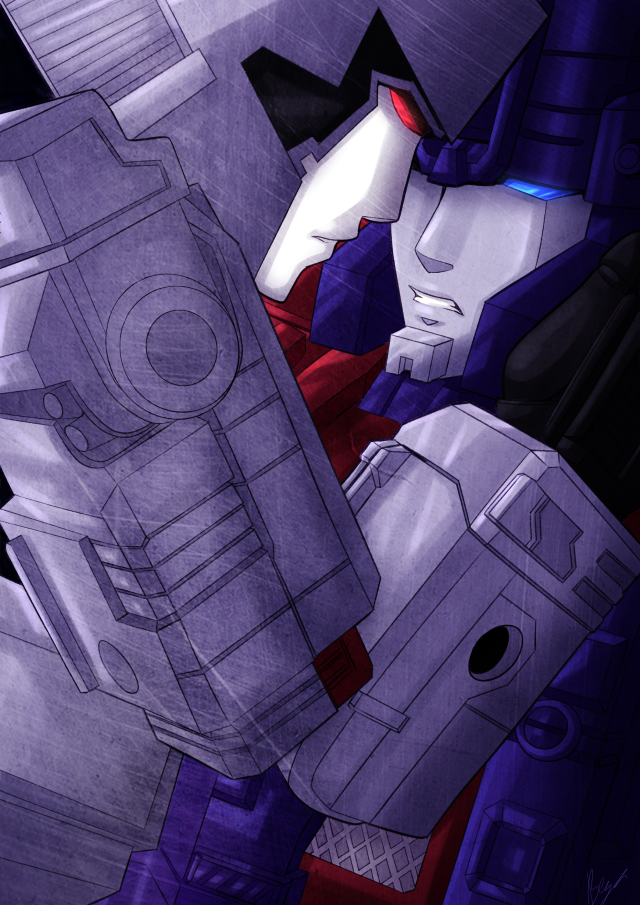 He caused pain, yes, but he felt no enjoyment in it. It was only out of necessity.

But enjoying it? Their screams? Their agony? Their suffering?

The former he wished he could have soothed, the latter he made to suffer himself. But they were screaming all the same.

It hurt him as if he was the one being killed.

And sometimes that shared pain hurt more than usual.

As was the case when he heard the screams of Ultra Magnus as they tortured him for answers.

With his helm turned away, the sound was the only thing that told him the state of his former brother.

From silence to grunts to whines, and then to screams. It kept getting worse, and every time it got worse it got harder for Megatron to endure, but he also had a little hope that this time Ultra Magnus would finally give in.

But his surrender never came and they continued.

Megatron didn’t want to do this, not to Ultra Magnus, but he had no other options.

Except that he did.

Shockwave was about to interrogate Ultra Magnus again, but turned around to face Megatron when he heard the order. The screams kept coming.

“I said to stop. Turn off the machine.”

Though obviously still confused, Shockwave did as he was told. The electrocution ceased and so did the screaming.

Ignoring Shockwave for a moment, he looked up at Ultra Magnus. He was panting, his entire frame hanging off the cuffs at his wrists which were attached to the ceiling and there was smoke pouring out of his seams.

Megatron had to admit, the sight was even worse than the sound.

Just looking at him he felt the numbness and ache Ultra Magnus must have felt in his arms. Or the burning pain in his knee and ankle joints from trying to stand upright.

Facing Shockwave again, he said, “Leave us for now, I’ll call you when we are ready to continue.”

Shockwave looked like he wanted to protest, but Megatron didn’t give him the chance, repeating with a nod towards the door, “Now.”

As Shockwave left, Megatron waited for the sound of the door closing to act.
But once he heard it, he stood still, gaze turned towards the ground.

What did he want to do?

With some hesitation he finally looked at Ultra Magnus again, who didn’t seem to have noticed Shockwave's absence yet. Most likely trying to get some composure and get his intakes under control.

Megatron took a few steps towards Ultra Magnus, who looked up after a few klicks. Locking optics with him, Megatron saw how pained they were, dimmed and unfocused.

He came to a halt a few meters in front of Ultra Magnus, barely able to hold himself on his shivering legs, so that they were on the same optic level.

For a long moment no one spoke and the only sounds were Ultra Magnus’ heavy breathing and creaking frame.

Megatron could see parts of Ultra Magnus’ frame that were scorched and cracked. At the sight he felt a slight shiver run through his own frame, feeling a cold prickle on his own plating where it was damaged on Ultra Magnus.

Forcing his gaze away from Ultra Magnus’ injuries, he instead focused on the others face and optics again.

Ultra Magnus’ face was unharmed. For now at least. But it was only a matter of time until that too would be damaged. Until even more would be damaged. More scorched metal, more cracks, more flowing energon, more pain.

He paused for a moment, looking down for a klick before reaching out to Ultra Magnus’ face with his right servo, not touching. Ultra Magnus held a pained expression, but his optics were defiant.

Now he did touch Ultra Magnus’ face. Putting his thumb on his cheek, under the optic. Ultra Magnus twitched under the touch and tried to pull away from it.

“You have nothing to win.”

At those words Ultra Magnus froze. For just a little moment there was no movement. Then Ultra Magnus’ frame tensed up. He no longer tried to pull away from Megatron’s touch.

“You can’t protect your Autobots forever, the war will get to them.”

“As long as the war continues, the fighting and dying will never stop. That goes for decepticons and autobots.” Megatron lifted Ultra Magnus’ helm up, forcing him to make eye-contact again, “You know that.”

Ultra Magnus’ shivering grew in intensity and Megatron could hear a choked off whine.

“They will all die either way, Ultra Magnus.”

“Shut up.” Ultra Magnus closed his optics and tried yet again to get away from Megatron’s touch, his frame shaking and lips quivering.

“Would you rather wait it out until the war destroys even more of Cybertron? Until the whole planet becomes a dead husk in space and our species becomes extinct?”

“No!” Ultra Magnus tensed up again, his frame jumped up as he tugged on the chains. Again they made eye-contact, and, for just a brief moment, Ultra Magnus had a look of determination written all over his face plates.

Until it all crashed back down, his expression becoming desperate yet again, frame shaking again. Again he let his helm slump down, breaking their eye-contact once more. Just this time it was accompanied by a static whine that broke into a quiet sob and tears gathering at the corners of his eyes.

Megatron shut his optics. Again, he was causing Ultra Magnus pain. And again, it was coursing through his own frame, making him experience the despair and frustration Ultra Magnus felt himself.

He hated it. He hated it so much and just wanted it all to stop.

He never wished for Ultra Magnus to suffer, especially not by his hand or word. And he resented the fact that he had done and still continued to do so.

They would seek each other out and give each other comfort... Reassure each other, show each other that they cared for one another... Tend to their wounds, caressing, embracing... Whispering promises and comforting words into their audials... Wiping away their tears... Giving hope for the unforeseen future...

That it had to come to this, Megatron being the reason for his friend needing comfort…!

Slowly he lifted Ultra Magnus’ helm up to face him again, but this time he was stroking the other’s face plates in a hopefully comforting way.

Ultra Magnus didn’t resist, but wasn’t looking at him either.

Megatron brought his left servo up as well, touching and stroking Ultra Magnus now on both sides, wiping the tears away that were about to roll down. Ultra Magnus didn’t really react, optics shuttering and lips still trembling, but Megatron kept going and closed the small gap between them.

Standing so close to one another Megatron removed his right servo from Ultra Magnus’ face, pulling him closer into an embrace and placing his helm next to his, left servo caressing the back of it with gentle strokes.

Megatron felt how tense Ultra Magnus became, yet again. His intakes were ragged and he was shivering again. He wasn’t struggling, though.

After a few moments Ultra Magnus finally slumped again, letting his helm fall onto Megatron’s shoulder, now leaning against Megatron who helped steady him, to put less pressure on his bound arms and legs. There was a quiet sound of relief coming from Ultra Magnus and Megatron felt it as well. Nuzzling even more into Ultra Magnus, Megatron also started caressing Ultra Magnus’s back plates.

They stood like this for who knows how long. Megatron refused to break the moment until he knew Ultra Magnus was calm again.

Megatron in turn felt a great calm wash over him as well. To think he could hear that sound again... He had almost forgotten it, but hearing it once more, after all this time, brought him a wave of sad yet cherished memories of their shared past. Of the pain they endured, the moments they spent alone in which nothing but themselves existed.

Megatron removed his servo from Ultra Magnus’ back so he could move his friend to face him again, kissing him on the helm before he had him in his previous position, Megatron’s right servo back on Ultra Magnus’ face. Just that this time, Megatron held him close enough for their forehelms to touch. Ultra Magnus’ expression was indeed a lot calmer than before, though it was still full of sadness.

Megatron waited a few clicks before he talked again, going through the words inside his processor over and over again. He wanted to offer Ultra Magnus this. A life of comfort with no worries. No pain, no corruption, just order and justice. And love.

He never got to voice any of these promises.

Megatron was startled for a klick, breaking the touch on their forehelms.

“Don’t start with your promises.” Ultra Magnus’ voice was clearer than before, and louder. “It’s not me who has the power to end this conflict. You do.”

“Ultra Magnus,” Megatron started, “We can end this suffering. We can end all the pain, all the heartbreak, if you just-”

There was an accusing tone in his voice, anger even. Megatron was the one to tense up this time, the servo still on Ultra Magnus’ face tightening in rage before letting go entirely. “I will never compromise my cause and vision by letting things turn back to how they were.”

“And I will never compromise my honour by betraying my people.”

Megatron took a few steps back, letting go of Ultra Magnus’ frame by pushing him away, letting him hang from the chains again.

One final time he looked in Ultra Magnus’ face and saw pain, misery, but also acceptance.

This was Ultra Magnus’s choice then. Endure the torture to keep the war waging, feeding his misguided sense of honour...

Megatron made many sacrifices in life, some hurting more to lose than others. But it was all necessary for the future of Cybertron.

Everything Megatron did was out of necessity.

“Shockwave…, you can come back in.”