Kelsey was coming home within hours, and it took that long for JD and me to come up for air from our practice session. He was brushing my hair over my shoulder so he could taste my shoulder and I was arching my back into his body curled around mine. Bliss. That’s what being with JD was for me. Absolute bliss. Reality would have to be addressed though, so after we sated ourselves, and he made sure I took another round of medication for my stellar display of cowardice during Gideon’s birth, we sighed through pulling on clothing, thinking that for the conversation we were going to have to have it was best to put temptation out of the way. For now, at least.

Sitting at his table, with a larger than usual breakfast since we needed to recharge our batteries so to speak, JD was the first to bring up the biggest issue with our newly established future. Actually, that’s inaccurate, he simply put my first worry off the table by telling me something he’d decided before Gideon came screaming into the world and right after he fell in love with me.

“I’m giving Kelsey this house,” he said it with ease, as though he gave away houses all the time. “Your house is huge, but it’s also tucked out of the way, so-”

“You’re willing to move into my massive place and give up the serenity you have here?” I had to admit, I’d fallen in love with JD’s place. The quiet, which I admittedly had at my house too, but I didn’t have the simplicity. The smaller space gave a feeling of comfort and HOME that was lacking in my house.

He reached for my hand and smiled at me. “Your house is pretty damn serene too, well it will be when we make some rules for how much we allow the outside world to interfere.” I bit my lip, thinking about how Kelsey had to tell us to turn our devices off so we could get on with it. “Unless you don’t like that idea.” He seemed less sure.

“I’m thinking that my house is going to be a lot more cozy with you in it, JD.” And I felt it, that’s what had been missing. Him. Love. “Have you told her?” He nodded, and I rolled my eyes. “I’m always the last to know.”

“You’re always the last to realize things, Ani, not the last to know. You probably knew what I was thinking, but you didn’t want to admit it.” Possibly. “Now, for the elephant in the room.”

“Actually,” JD stood up and pulled me to my feet, breakfast had been finished for awhile. “Your dad called me while you were-” Passed out because I can’t stomach blood and gore, I inserted it in my mind. “He’s already called the attorney, who was apparently already working on the paperwork. He was on the email list. Roger is a dumb ass.” I shook my head, I hadn’t managed to look through the entire CC list on the email that sent out the video. “All you have to do is sign off, and then we’re in the clear on that one.”

“He was the elephant wasn’t it?” I was feeling a little confused, but JD shook his head and smiled down at me. “Well, what is?”

He pulled me outside, onto the swing that I fell in love with when we arrived. Letting me sit down, he made my breath completely leave me when he got down on his knee in front of me. “The elephant, Anilea Ampstead, is that we’re talking about cohabitating, potential babies, and commitment without actually making a commitment.” Reaching into his pocket he pulled out a dainty band that managed to look like a twisted twig, the stone a raw gem that was unique and gorgeous pale blue. “So?”

I felt like I was floundering. My mouth searching for words that I didn’t know. “When?” My eyes met his and he looked as confused as I was. “Did you get this?” I touched the ring and swallowed hard. I didn’t know why it mattered, but I wanted to know.

“After I left, that first night.” I nodded, remembering he’d been called away by a job. “I was working, and one of the people I spoke with is a jewelry designer. I saw this on her worktable, and she told me it was the first one she made that was inspired by nature. And I knew I wanted it for you.” His Adam’s apple bobbed and he took my hand. “So, Ani?” Ah, right, my answer.

“Let’s see if it fits,” I held out my hand for him to slide it on my ring finger. “Looks like it belongs there, doesn’t it?” I bit my lip, seeing him studying my finger wearing his ring. “I’ll never take it off.” His eyes met mine and his smile hit me like a freight train. “Of course I’ll marry you, this way I don’t have to fatten you up or burn all your clothes, right?” He laughed as he leaned in to kiss me.

JD had told my dad when they spoke during my indisposition in the hospital. And Dad, for what it was worth, was beyond happy. In JD Richter, Dad saw a man who wasn’t interested in my wealth, and one that would take care of me and keep me safe. That was something I hadn’t seen coming, but I probably should have. JD and Dad had things in common that had nothing to do with their work.

Dad was at my house when we arrived after Kelsey and Gideon settled into their new house. Dorothy had gone to my house and gotten the baby things, after I’d programmed Pandi remotely to give her access. The three of us, a trio of grandparents, helped make sure that they were comfortable, Dorothy promising that she planned on staying on for some time to get Kelsey and Gideon’s routine straight.

Pulling into my driveway, Dad stood alongside his security guru, Kelvin. I had a flash of panic, but JD put me at ease.

“Kelvin came to make sure that Roger didn’t add any new enhancements while we were gone.” His hand touched mine, the ring he’d given me sparkling gently in the sunlight. “He’s a-”

“Good guy?” I smiled, remembering that Kelvin had said the same about the man sitting next to me. “I think I’ve heard that before.”

Dad let Kelvin and JD discuss security while he took me inside. “Let’s see it.” I held out my hand and he took it in his own. “He knows you better than every other man you’ve ever been with, doesn’t he?” When his eyes met mine he was smiling. “I approve, not that you need it-”

“Yeah I do,” I said, moving so I could hug him. “I do need it, Dad, because I truly screw up when I don’t have it.” He chuckled, his hand cupping the back of my head like he’d done when I was little. “JD is-”

“The man for you,” he whispered, kissing the top of my head. “Knew it from the moment I met him, Ani.” I grinned into his shirt. “He walked in this house and acted like he couldn’t see anyone but you. That told me everything I needed to know.”

“Kelvin probably helped too,” I offered, pulling back and seeing him staring down at me with a smirk. “He told me he knew JD, so knowing he was YOUR guy-”

“With a brain like yours, I’ll never know why you can’t-”

I sighed and pulled away with a grin. “Yeah, yeah, yeah. Why I can’t do math and science doesn’t leave a mark.” Maybe, I thought, my kid would be more like Dad and he’d feel more fulfilled. The thought had me giggling.

“What’s so funny?” JD was alone when he came inside, and he told Dad that Kelvin had another job to get to to explain his absence. “Ani?”

“Sorry,” I said, getting myself under control. “I just had a funny thought.”

Both men looked at me like they wanted to know, but I shook my head. “Who wants food?” I asked, deflecting with my best weapon.

In case anyone wants to know what the ring that JD gave Ani looks like: 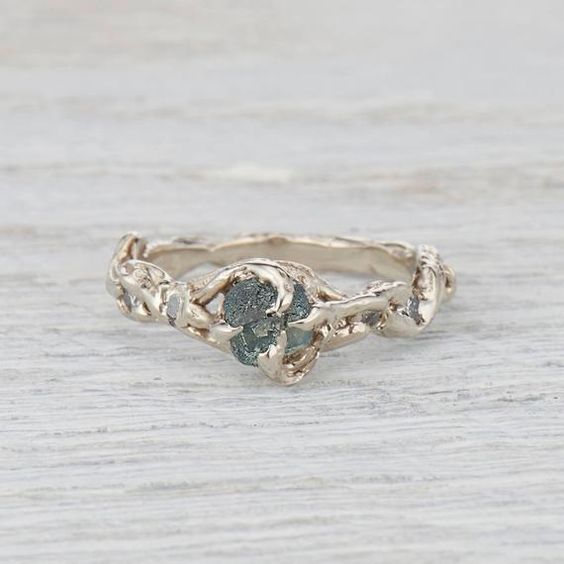