The Last Romp on The Harbinger

Han and Leia finally find some time together during the long voyage on The Harbinger.

Taking place during The Last Flight of the Harbinger #21-25 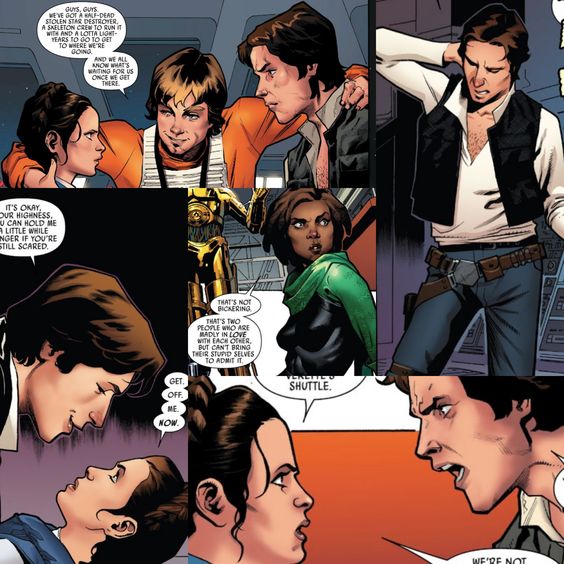 The Harbinger had a strange way of being bigger than many cities while still feeling incredibly small. It seemed to Han that whenever he got a moment alone with Leia someone would show up, or comm, or find some other way to ruin the mood. The ship held less people than Home One but, somehow, he still felt crowded. He and Leia hadn’t gotten to truly enjoy each other’s company for over two weeks and it was beginning to show in their relationship. They were snapping at each other more often, and he found himself torn between wanting to yell at her till he went hoarse or shoving her up against the nearest bulkhead and kissing her till she was silent.

Their last fight about who the true ‘Captain’ was had died out due to Luke’s general sweet presence and good humor, but Han still nearly jumped out of his skin when Leia drew near about an hour later and whispered, “Equipment room 845, wait fifteen minutes after I leave.”

Her rich alto voice so close to his ear made him shiver, and she chuckled before leaving the bridge.

Han glanced around and saw a smirking Sana shake her head and roll her eyes.

Attempting to regain his lost composure, Han scowled at her.

Sana chuffed out a laugh and shook her head again. “You two are ridiculous, and not as slick as you think you are.”

Han’s frown deepened but he turned back to look out the viewport, trying to ignore her and mentally counting down every second.

When the fifteen minutes passed, it took another five for him to sprint down and across the ship to where she was waiting. As soon as the door slid open, Han pressed Leia up against the nearest bulkhead, his body fully against hers, making it obvious that he’d thought of little else for the previous twenty minutes.

Leia’s hand slipped between them and she pressed her palm up against his erection causing Han to groan into her mouth. The two began hastily removing Leia’s shirt , and soon he had a handful of Leia’s breasts. He ran his thumbs over her stiff nipples in a rough way he knew drove her crazy.

She bit his bottom lip and lightly scraped her teeth across the tender flesh, causing a shiver to run up Han’s spine. He pushed his knee up between her legs and she didn’t hesitate to start rocking against him.

They began to frantically remove his shirt and soon Leia’s nails raked over his chest, gently scratching his nipples, causing Han to gasp and pull her closer.

Han’s comlink sounded from the floor and the roars of an angry Wookiee filled the closet. They pulled apart for a moment but only so they could pull off Leia’s undershirt. The growls continued; Leia pulled away when she caught the phrase ‘fucking like Kushiban’, and she frowned at Han.

“Come on, sweetheart, Wookiees can smell that kind of thing. He figured it out months ago.”

Leia wanted to be irritated at him but his fingers had finally found their way in her underwear and he was moving them in a way that made her hair stand on end.

There was time to be pissed off later.

Needing more than just his fingers Leia shoved down her pants and kicked them to the side. The sound of Han’s belt and blaster hitting the floor was drowned out by their loud breathing and Chewie’s continued berating.

Han paused for a moment to wildly search for his comlink and finally shut it off.

“Can’t get one kiffing moment of peace…” he muttered, and threw the device back to the ground.

Without a word between them Han rushed back to her, pushing her up against the bulkhead, her legs wrapping around his waist. The stubble on Han’s cheeks scratched lightly against her neck as he nipped at her jaw and positioned himself between her legs.

After a few moments of fumbling, Han sank into her and they exhaled loudly in tandem. Leia’s little breaths and whimpers were driving Han crazy as he tried to focus on lasting longer than the first three thrusts.

Five minutes later Han couldn’t hold back any longer and came with a groan. He knew Leia wasn’t quite there but the buildup had been too much for him.

“Frink… Jes…” he muttered in Corellian into her neck.

As soon as his mind was working again, he was moving his hand between them, slipping between her wet folds and basking in her sharp intake of breath. He met her eyes then and grinned at her flushed face. Han skillfully slid his fingers around her clit, soon picking a perfect rhythm.

It did not take much longer before Leia was falling over the edge, her fingers digging into his hair.

The way Leia breathed out his name and a string of swear words against his neck was almost enough to make Han hard again but they just didn’t have time.

As he lowered her back to the ground, they could hear both their comlinks going off as people wondered where their two ‘captains’ had wandered off to.

Han opened up his comlink and winced at the Shyriiwook curses that streamed out.

“Woah, woah, calm down, I’m here! Just give me a second, would ya?!” Han yelled back at his companion.

Luke was on the other end of Leia’s beeping comlink, alarmed at her lack of response.

After both of them had suitably calmed down their friends, they began to get dressed, and then finally paused to look at each other before breaking out into a fit of laughter.

Han quirked an eyebrow. “Apparently we’re all that’s holding the ship together, Your Highness.”

“That’s Captain to you,” Leia said, but Han spied the small upturn of her lips and, taking a chance but unable to resist, just leaned down to give her a final kiss. Leia knew that she should protest but a mix of his soft lips and some lingering post orgasmic bliss made her unable to resist.

He pulled back and gave her a mocking salute. “Sure, whatever you say, Captain .”

As always huge thank you to Dessi ❤️