Hannibal experiments with Will’s semen in the kitchen.
For #BottomHanniBonanza and #SubHannibalWeek

Many thanks to Regina for having beta read this work, which will probably be included in a book I’m planning to publish ❀ 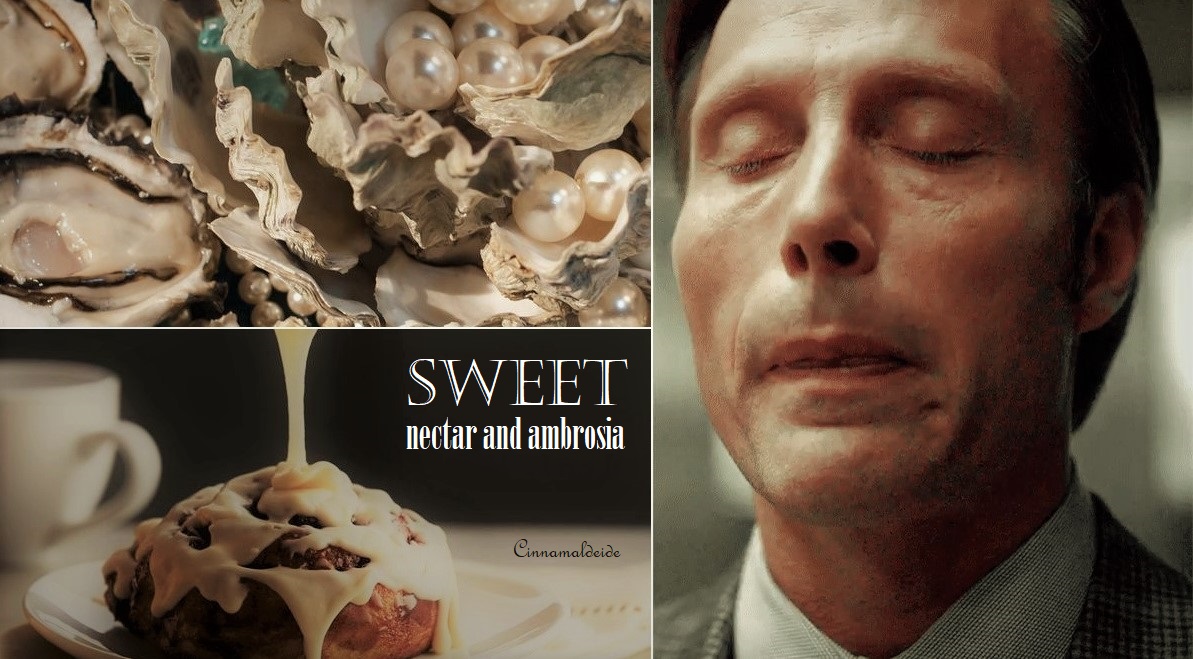 It wasn’t an unreasonable craving, nor was it extensively difficult to satisfy. He wouldn’t voice his request, rather exhaust Hannibal with vigorous sex and multiple orgasms, and then take advantage of his slack mouth, when Will knew his partner was too tired to fully enjoy himself, but too polite to refuse.

Will sought the slacked jaw, the urgent noises, the simple abnegation through discomfort behind the act itself.

Hannibal understood the indulgence. He starved Will of his climax on purpose, whenever he felt particularly antagonizing, and Will responded accordingly. Hands in his hair, pulling and commanding, until the man would choke on his spend.

There were less than maddeningly polite blow jobs for Will as well, teeth on his flesh in the middle of the night to placate a very specific hunger, plentiful sweat and abandoned curses while Hannibal aggressively suffocated his nightmares between his tighs.

There was little artistry involved, but Hannibal always made the whole experience memorable.

Will had his craves and Hannibal his culinary caprices, and there were times when the two managed to collide.

“I intend to experiment with your sperm in the kitchen,” Hannibal declared over dinner.

Will stopped his spoonful of Panna cotta halfway to his mouth. “I hope you didn’t begin tonight.”

He was all for swallowing. Consciously.

Hannibal gave a little smile in response. “It would be in poor taste to do so without informing my guest beforehand,” he said, although the both of them knew that wouldn’t have stopped the man. “I’m just letting you know that your seed will be carefully preserved and employed in the near future.”

Will read between the lines. “Are you not using your own?”

“It would be remiss of me to only experiment with one source,” he countered.

Several days later, Will found a book on semen-based recipes for desserts and cocktails on their kitchen counter, and remembered to have glimpsed the cover on a stall during their leisurely stroll through the old market. It had been out of place among unadventurous housewives and distracted teenager bypassers, it must have stood out for Hannibal as well.

Browsing through its pages, Will admitted that the pictures were appetizing, if a bit obvious.

Can’t be worse than cannibalism, Will figured.

It wasn’t lost to him that the whole business envisioned a certain control would be exerted over his releases. It didn’t surprise Will that a number of collection cups made their appearance beside their bed, it just reminded him of his encephalitis. Samples of blood and urine to be gathered, tests and analysis to be run, the constant feeling of being not okay, and Hannibal behind the entire ordeal.

He went to fuck Hannibal in the kitchen instead.

“Nothing better than fresh produce,” the man had the gall to comment afterwards.

Needless to say, the cup remained on the bedside table for a few more tense, interminable days.

Will refused to taste the first attempt of personalized Piña Colada Hannibal had come up with out of spite, but the offence at his refusal had been such that he almost regretted it.

To compromise, Will offered him a bargain.

“Once each. I’ll eat whatever you cook.”

Surprisingly, Hannibal agreed without a fuss.

The spunk in his food wasn’t the real issue, anyway.

Hannibal took on the collection much more philosophically than Will had, clinical and meticulous in his preparation of sterile instruments and clean sheets. Will watched him detachedly turn their linens sideways and slide onto the bed with grace, and felt the distinct urge to ruin his self-possession with harsh, precise strokes on his prostate.

Will whispered indecent words in his ear and watched him writhe on his fingers, two and then three and then four, and smirked with mirth at the sight of Hannibal’s mess nowhere near the collection cup.

As expected, that just meant that Hannibal would wait out his refractory period and try again, although the second attempt would take longer than the first. Will was pleased to notice that Hannibal seemed mildly aggravated by the distraction, but still amenable to the turn of events. Will convinced himself that the culinary experimentation wasn’t an excuse to screw with Will and his already remarkable dietary habits.

“I like it,” Will decreted, contemplative, after sipping a spoon of his not just fancy noodle soup. “Not much different from the broth you prepared for me while I was sick with encephalitis,” he added.

Hannibal didn’t even blink. “We could say that this version has a more personal touch.”

Will came to anticipate the terrible, terrible comments and filthy, indecent reminders of the organic content in his portions, and Hannibal never failed to deliver his fair share of clever, arguably crass double entendres with a private smile on his lips. There was a certain connivance to it, and Will came to silently treasure it.

Not to mention the physical endeavours required for the special sauce.

He was almost saddened to learn that the cookbook from which Hannibal had been taking inspiration was about to exhaust its repertoire of interesting recipes involving seminal fluids, but before his mind seriously considered to purchase another volume on the same subject, Hannibal declared that the pertinent literature was currently rather lacking, reason for which he was entertaining the thought of setting manuals aside and work with his own imagination.

“Perhaps I shall collect my finest recipes in a book as well, if my results are worth taking note,” he claimed. Will was almost impressed by his modesty.

“Imagine Jack finding out,” Will said. “Would he still count that as cannibalism?”

“It would certainly provide for an interesting reading. He might challenge himself and test some of my suggestions with his younger partner, maybe offer insight to improve the final outcome.”

Will didn’t particularly care about Jack Crawford and his private life, unless the man managed to track them down and come after them. In fact, Will strongly suspected that the retired officer was still waiting for the right clues to resume his obsessive pursuit.

The last lead accurately left for Jack had predictably taken him nowhere near Hannibal or Will, but the man was naught if not obstinate.

“He followed you to find me in Italy, but since you’re not on his side anymore, he might adopt Alana’s method instead. She chose to follow the refined wine, the white truffles, the local delicacies,” Hannibal said, setting on the table their beautiful platter of Arcachon oysters with additional proteins. “Bedelia had been adamant about visiting her favoured shop in Florence once a week for her Bâtard-Montrachet and tartufi bianchi, and I enjoyed letting her send her distress signal with some faint hope for rescue.”

“Depends on the way you season it,” Hannibal countered, amused. “I fed her oysters, acorns and Marsala, but she was already souring her meat with a different blend of flavours.”

Will remembered her glassy, absent eyes and slack limbs on the plush chair, the distant quality of her voice as she replied to their question with vague words. “Less salt on her oysters, I’d wager.”

He picked his fork with defiance and offered a wan smile to Hannibal.

However, the man didn’t return it, rather kept his eyes lowered and reached for the plate of molluscs with his hands. “She had her fill of that elsewhere,” he said in a hushed tone.

His long fingers delicately lifted a perlaceous clam and brought it to his mouth, and Will, simmering in an unpleasant sense of quiet irritation, watched the mouthful disappear behind his defined lips.

The morsel slid on his tongue, olive oil and fresh semen and lemon juice, then down his throat, and Will was abruptly reminded of his fondness for Hannibal’s pliant, slack jaw. He felt nostalgic about the sensation of warm flesh and dripping saliva around his penis.

Positioning the utensil back on his napkin, Will considered the food elegantly laid between them, then stood from his chair and directed himself closer to Hannibal. He took an oyster shell from the serving dish, then drank its content down along the way with nonchalance.

With an absent nod of understanding, Will turned towards their meal, thinking about Bedelia and Hannibal on opposite sides of the table, placing himself in her place, and gently selected another shell from the tray.

Rather than eating it himself, he offered it to Hannibal, patiently waiting for the man to accept it.

And Hannibal did, graciously parting his fauces with mirth gleaming in his eyes.

Will watched the white of his teeth and the translucent seed on his tongue. A brief, voluptuous sight before Hannibal swallowed silently.

The empty clam joined its fellow on the plate, and Will made a pensive sound.

“Might need some more dressing, though,” he said, before bringing his hand to the zip of his pants with clear intent.

Hannibal stared at it with unwavering attention. “And you’re very obliging to provide it.”

Those were the last words Hannibal uttered for quite a while, having his mouth otherwise engaged.

For his part, Will kept a firm hand on his nape to ensure his lips wouldn’t leave the business unattended, suckling and pleasuring the hard, aching cock before the seated man. Will ascertained that his predilection for indolent blow jobs hadn’t subsided at all in the past weeks.

It wouldn’t be terribly uncouth to ruthlessly fuck his way into completion, but there was another opening that Will planned to fill with himself.

“Up on the table, on your hands and knees,” the man instructed with a light touch on his shoulder. “Time for dessert.”

Dessert, as Hannibal pointedly explained afterwards, would have consisted of delicate chocolate truffles with a warm, liquid center, the umpteemph reminder of his past days in Italy that night for a change, but Will elected instead to leisurely eat Hannibal out with generous laps of his pointed tongue with rapid moves until the man was reduced to sobs and groans, begging for more.

It wasn’t altogether surprising to learn that the table was in fact at the right height to bend Hannibal over and slide into him with perfect ease, the entrance smooth and comforting like coming home.

There seemed to be little point in coating their remaining oysters in a fresh helping of sperm, as Hannibal had already provided an adequate amount before serving them, but his come still partly landed onto the unassuming molluscs and their otherwise unstained tablecloth.

Hannibal was still shaking with little tremors when Will spilled inside him.

“Hope you had your fill,” Will teased, feeling emboldened by his speechlessness. He thought that the man might need time to recover, before regaining his ability to speak, but that didn’t seem to be the case.

“You know what they say about the food of the gods,” Hannibal managed, spent and heaving. “Sweet nectar and ambrosia. I dare say feeding on each other sounds better than that.”

Come swallowing should be a squick for me, yet here we are. And right on time for the Sub Hannibal Week.
I wasn’t kidding about the book. Let me know if you’re interested, or if you spot errors I should fix.
Find me elsewhere. Post on Twitter.