I Know That He's Mine

Watching Jack comfort Rosie, Phryne begins to wonder if it had taken her too long to realize what she was feeling for him.

This is for the Whumptober prompt "Crying". I also drew the accompanying picture of Phryne in the station.

I have to give many thanks to SnowyMary and glamorouspixels for all their help. It has been a few months since I wrote anything and trying to get back into it was a bit of a struggle. 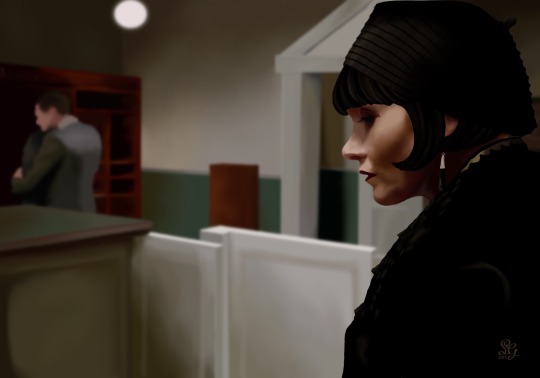 The thrill of the chase was over, and this one had led to a less than satisfying end. Though they had saved the girls, Phryne couldn’t help but think of all the girls that had come before, and it left her sick to her stomach. She knew that the world was full of vile people who did unspeakable thingsーshe had witnessed enough of themーbut to find that Sidney Fletcher and George Sanderson were in the middle of it weighed heavily on her heart.

Phryne could tell that Jack was struggling with the revelation as well. He had looked up to this man for so many yearsーhad called him his father-in-law for most of them. Seeing him like this only added to her pain, because as much as the whole situation was bothering her, it had affected Jack on a deeper level. He hid it well behind his dour expression, but she could see it in the clenched fist and extra deep creases in his brow. She had spent a lot of time looking at that face, and all she wanted to do was ease some of that tension.

As tired and eager as Phryne was to get home, she hesitated to leave. As she contemplated her decision, her eyes were drawn to the woman behind the desk. Despite Rosie’s obvious disapproval of Jack’s relationship with her, Phryne wouldn’t wish this upon anyone. As if sensing her presence, Rosie turned, the betrayal clearly etched across her face, body shaking from angerーher only defense against the shock. Huffing, she turned away again. Of course, the last person she wanted to see was Phryne. A stranger to witness her shame. Rosie wouldn’t know that Phryne could relate to having a father who tried to justify poor decisions and deny involvementーto have the one person in your life who you should be able to rely on leave you unprotected. George Sanderson had gone beyond that, though. He had knowingly allowed his daughter to build a new life with someone she thought she could trust, and now this whole world was crumbling down around her.

With respect to the other woman’s feelings, Phryne decided to leave, but the sound of George Sanderson’s voice stopped her. She caught Jack’s glance and was torn. Maybe it was the rush of adrenaline subsiding and the reality of what had just happened finally sinking in, but she just wanted to be near him. It had crossed her mind at one pointーtied up in that holdーthat she might have gotten herself into a situation she could not get out of. She also couldn’t forget the sound of him yelling her name; it played over and over in her head stirring something within herーtugging at her heart in a way that was happening more and more frequently.

Since his divorce, Jack had been different, and the changes had not gone unnoticed by Phryne. They had sparked unfamiliar feelings within her; however, instead of exploring them, she had pushed them awayーhidden them behind a wall. But in recent weeks, that wall had started to crack without her even realizing it. And now, all those things she had refused to acknowledgeーthe butterflies in her stomach as they walked arm in arm, the desire to spend evenings playing draughts, her eagerness to include him (and be included) in cases, the flickers of jealousyーwere suddenly seeping through and a picture was beginning to form.

Taking a deep breath, she shook away those thoughts. She wasn’t quite ready to deal with what that picture was, but it seemed that it was not to be that simple, because as she watched Jack’s gaze shift to Rosie, something else filled her mindーdoubt. It wasn’t often that Phryne doubted herself, but as Jack made his way over to Rosie, she doubted her decision to build a wall around her heartーto not take anything seriously. She wondered if it had taken her too long to see what could be.

Standing frozen in place at the door, her eyes locked on Jack as his arms wrapped around his former wife. As she watched him comfort her, his hands stroking her hair, she suddenly found it impossible to breathe, her eyes glued to the couple. Their familiarity caused a tightening in her chestーand that flicker of jealousy was back.

She felt no animosity toward Rosie, for she herself had been alone and desperate in the pastーabandoned by those she had called her friends. It would have made all the difference if she had had someone to turn to for support. Though it had made her stronger, she wouldn’t wish that experience on anyone.

The woman had held herself together for as long as she could, and the sobs could not be contained any longer. Rosie resisted his embrace at first, pushing him away, but Jack’s soothing words and open arms were impossible to resist, and she finally collapsed into him. Who better to turn to than gentle, steadfast Jack? Phryne knew just how soothing his presence could. And he was there for Rosie, because that was the kind of man he was. Jack and Rosie’s history was long, and Phryne couldn’t fault him for wanting to comfort the woman who had been his wifeーwhom he had loved for over a decade.

She turned to leave. They didn’t need an audience.

Fingers gripped at his jacket and sobs vibrated through his body. Cradling Rosie's head with his hand, Jack pulled her closer. Unfortunately, the man who should be here to comfort her was the one who had betrayed her. Jack was the only safe spot she currently had, which was ironic since he had hardly been the husband she needed. He had known his marriage was over years before he finally decided to go through with the divorce. He still loved her and probably always would, but he was a different person nowーhe had been a different person after the war and their marriage had just never recovered. It had been hard to accept that he had failedーfailed her. It was hard not to think that he might have saved her from all of this if he had just tried harder. But deep down he knew that wasn’t true. It was never meant to be, and in the end the decision had been mutual. She deserved the chance to be happy.

The familiar smell of her perfume filled his nostrils, but instead of it bringing back fond memories, it only made him think of someone else’s perfume. Phryne. The fear that had gripped his heart when he realized she was on the ship came crashing back. He hadn’t had a chance to talk to her or even ask if she was alright. His eyes did a sweep of the room and realized that she had left. Of course she had. She didn’t have any reason to stay.

As much as he wanted her to, he had been fairly certain she wouldn’t stay home, and his suspicions had been proven correct. That was one of the things that made him want to throw her in a cell. He sighed. Yes, he would like to make her understand how dangerous her actions were, but it also made him want to kiss her. God help him. She was so infuriating. And besides, he couldn’t be too upset with her since he also had ignored orders to stand down. But the moment he had realized that she was on the ship, his heart had plummeted. The situation was more dire than he had anticipated and she had found herself in the middle of it. It had brought back the memory of the last time he thought he had lost her. He had done what he thought he needed to do at that pointーhe had pulled awayーpushed her to give him some space. In the end, it hadn’t worked. Looking back, he wasn’t surprised. There was this connection between them that made it impossible to stay away.

She made him feel alive in a way that he hadn’t felt in a very long timeーor ever really. He had never considered himself an interesting man, but a year later she was still invading his personal space and inviting him over for drinks. He had been given the chance to see past the stylish haircut and fancy clothesーto see past the troublemaker ーand see the woman who would risk her life to save five girls locked away on a ship in the middle of the night. She had captured his heart with all her little looks and in all the ways she found to frustrate him. But something had been holding him back. He had been waiting for some kind of sign from her that she felt the same way. And maybe that was what she had been doingーshowing that she did careーin her way. Now something else had gripped his heart and he needed to see her.

Rosie shifted in his arms creating space between them as she wiped away the tears. There was a twinge of guilt in the pit of his stomach for thinking about another woman while Rosie was sobbing in his arms. So, right now he needed to focus on her. She deserved that much.