For questions or requests :
https://curiouscat.me/BambiGrumpy

Was Jackson imagine things?
It sounded like someone was calling him.

Maybe it was just a dream... 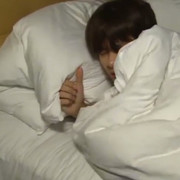 "Gaga"
There it was again.
And it sounded like… Mark?
Before he could open his eyes a very light touch was on his shoulder.
And on his neck.
And even on his cheek.

His boyfriend was working his way to his face with sweet light kisses.

"I don't wanna…"
Jackson buried his face in the pillow.
Although he really loved the tender expression of affection his boyfriend was sharing with him right now he was way too sleepy to return the gesture.
"let me sleep…"
A soft chuckle was heard behind the tired man.
Mark put his hand on Jackson's hair and began to stroke it.
"But we need to shower, gaga."

"We can do it later…"
Another chuckle.
"Are you sure?"

"Let us lie for a little bit longer, pretty please?"
Jackson knew he won in this moment he looked to his boyfriend with sleepy eyes and his significant pout. Mark couldn't hide his smile.
Damn, he was so whipped.

"I'm your big baby and now cuddle with me~"