Talking with Ryuucaro about Edeleth, she mentioned she wanted to draw Edeleth dressing up as Daphne and Velma for Halloween. When she told me that, I asked her if I could write a one-shot and this little story came up!

"El!" she hears Byleth call her from outside the bathroom. "Are you almost done?"

"Almost! Just five more minutes." Edelgard says as she stares at herself, wanting to make sure that the costume she was wearing looked good.

Though who was she kidding, she looked ridiculous!

And it was all Caspar's fault.

Ever since he made Byleth watch Scooby Doo with him, her girlfriend had been obsessed with the show. Not only did she spend most of her free time watching episodes online, but now she was using some of the show's slang, making Edelgard groan each time she heard her say jinkies.

Still, when Byleth had begged her to be her Daphne, Edelgard couldn't refuse her. Not when her girlfriend gave her those puppy eyes that were guaranteed to make Edelgard do anything.

Knowing that there was no point in avoiding the inevitable, Edelgard opens the door to the bathroom, only to find Byleth right in front of her in the most adorable Velma costume she had ever seen.

Byleth not only looked adorable, she also looked hot.

And Edelgard didn't know what to do.

"El!" Byleth smiles at her and all of Edelgard's concerns and worries about her costume are gone. "You look amazing!"

"You look beautiful." Byleth promises her as she gives her a soft peck. "And I'm so lucky to be with you."

Edelgard blushes, still not used to Byleth complimenting her.

"Ahhhh! I'm so happy we decided to choose these as our costumes! We perfectly match!" Byleth smiles while taking her phone out. "We need to take a picture."

"A picture?" Edelgard gulps as her girlfriend hugs her. "But…"

"Please?" Byleth pouts at her and Edelgard knows she's gone.

"The things I do for you." she murmurs as she lets herself be hugged.

"Oh! I remember this thing Daphne and Velma did on one episode that we have to do." her girlfriend says while raising her arm and making a half heart shape with her hand.

There were a lot of things that Edelgard was willing to do for her girlfriend.

This was where she drew the line.

"Pretty please?" Byleth is now using her puppy eyes and her pout, which was her most lethal combination.

Raising her hand and making a half heart shape, Edelgard moves it so that both their hands are creating a heart.

"Yaaaay! Okay, when the countdown is at 1 we'll say jinkies!" Byleth smiles at her as she puts her phone on a stand… Wait, when did she even get that stand?!, to automatically take the picture.

"Ready?" Byleth asks her as they watch the countdown go to 1. "Jinkies!"

"Jinkies." Edelgard says with her own smile as the phone takes the picture. 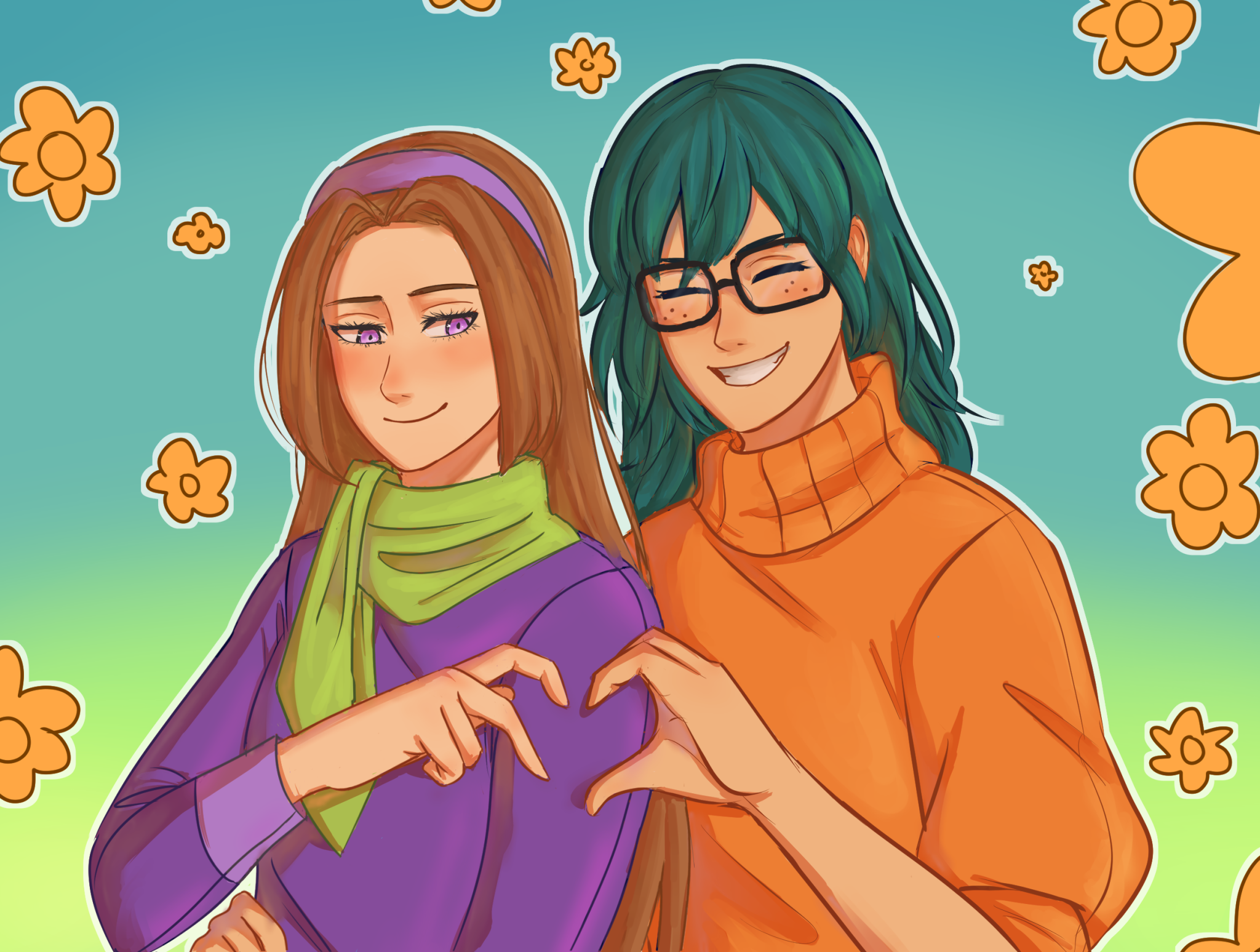 Honestly, she thinks while watching Byleth grin and add effects to their picture, this isn't bad at all.

Thank you Ryuucaro for letting me write this little one-shot based on your amazing art!