That's what friends are for

Zoltan is pretty down after his wedding has been canceled. But luckily he has a good friend like Dandelion who helps cheering him up again.

This is set between the first and second game.

It's gonna be a series but each part is finished on it's own so don't worry about this. 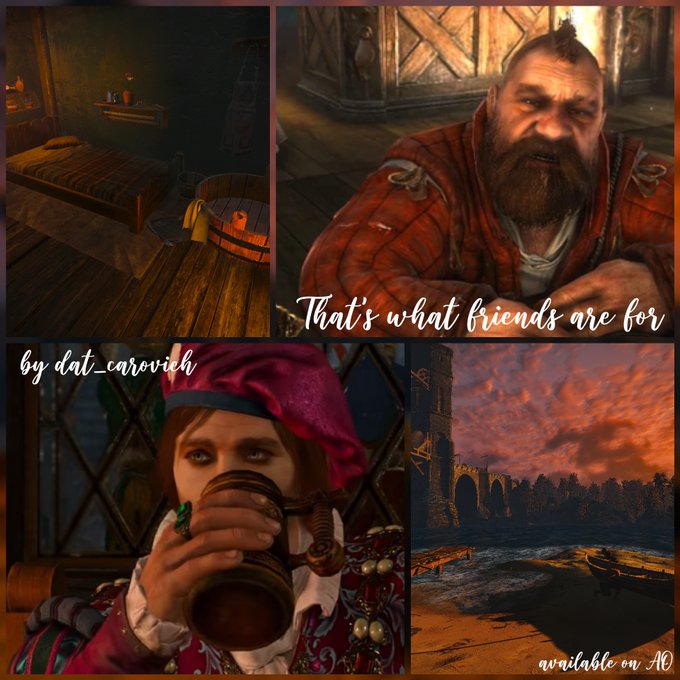 „Absolute bullshit, I tell ya,“ Zoltan growled, pacing up and down their inn room. “You know first the agree on the wedding and then they fucking insult me like that. To think we travelled all the way here for that shite. They could have told me from the beginning, but no, make us come here and only tell me the day before.” He was clearly extremely angry at the whole thing, completely understandable in Dandelion's opinion.

“You need to blow off some steam,” Dandelion said. He was sitting on the bed, leaned against the headboard.

“Obviously and how do you suggest I do that?” Zoltan snapped.

“I don’t know, kill something...” he looked around realizing there wasn’t really a creature that should be killed around, “or maybe not. Fuck someone?” he suggested. Zoltan squinted at him.

“And who do you suggest I fuck. I don’t suppose any of the dwarfs here would be interested after this shit show!”

Dandelion grinned at him. “Dunno, me?”

“Sorry what?” Zoltan seemed extremely surprised by this suggestion. Dandelion started to second guess his idea, while Zoltan was staring at him, mouth open. It had been way to long since Dandelion had been fucked and he would in fact love to. Zoltan and him were good friends so for him if seemed obvious. For the dwarf apparently not.

“Or not, if you’re not interested...,” he said shrugging.

“Well come here, then,” he commanded and Zoltan walked over to the bed, sitting down close to the troubadour. Dandelion leaned in, crashing their mouths together, licking into Zoltan’s mouth. His hand on the back of Zoltan’s head. The beard tickled a little around his mouth but it was nice.

“You’re eager,” Zoltan mumbled against Dandelion’s lips as he was pushed back into a lying position by the troubadour.

“It’s been a while,” Dandelion said. Zoltan laughed.

“You literally bedded the hunter’s wife three days ago,” Zoltan said but buried his hand in Dandelion’s hair, pushing the hat off in the process.

“So? That’s three days. And it’s been far longer since I’ve been fucked,” he explained. Zoltan laughed into Dandelion’s mouth and pushed them around, straddling the bard.

“Ya should get out of that doublet of yours,” Zoltan growled and pulled at the offending garment. Dandelion pushed himself into a sitting position and got rid of the doublet and the shirt he was wearing underneath.

Zoltan was still straddling Dandelion’s thighs. Dandelion placed his hands on Zoltan’s chest tan let his fingers run through the chest hair down over the belly until he reached the waistband. He could hear Zoltan’s slight panting as he teased the soft skin just over the trousers.

“Well get on with it,” the dwarf said and pushed his crotch forwards. Dandelion undid the laces of the trousers and dipped his hand in. Zoltan’s cock in his hand was short but thick and Dandelion bit his lower lips. The idea of getting fucked by Zoltan sounded better and better. Zoltan’s fingers had found their way back into Dandelions hair and he arched into the touch.

“I’m sure you got some oil somewhere?” Zoltan asked.

“Yeah, just let me,” he shoved Zoltan from his lap and got up and walked over to his bag. On the way he opened the laces to his trousers and was left just in his blue thighs. His hard cock clearly visible through the fabric. After fetching the oil he turned around again and heard Zoltan loudly pulling in air.

“You like that?” he asked, as he walked back to the bed confidently. Pushing the oil in Zoltan’s hand. “Maybe I should leave them on,” he suggested.

“Maybe you should turn around and get on your knees,” Zoltan growled and with a laugh Dandelion did. He felt Zoltan’s fingers dig into his butt cheeks and then his tights getting pulled down enough to get his ass out. And then a thick, slick finger teased his whole and he arched into the touch. It definitely had been too long. Zoltan pushed one finger in and Dandelion clearly felt the stretch. His fingers were much thicker than human fingers. He was looking forwards to feeling the thick cock inside him. The second big hand was lying on his hips, fingers slightly pressing into the flesh, as Zoltan took his time stretching him.

He pulled the fingers back and Dandelion heard the pop of the cork again, seconds before the tip of the cock was pressed against his entrance.

“You sure you can take me?” Zoltan asked. Dandelion could hear the grin.

“Maybe you should hurry up and find out,” Dandelion replied and immediately Zoltan pushed in. It was a lot but not too much. He slightly brushed Dandelion’s prostate and the bard’s arms gave up under him as Zoltan started to fuck him in earnest.

“Oh gods… fuck yes… shit,” he moaned against the mattress. Zoltan had gripped his hips with both his hands now to hold him in place. Dandelion’s cock was straining against the tights he was still wearing. But they were soft so it wasn’t uncomfortable. One hand moved from Dandelion’s hip between his legs and cupped his cock and balls, slightly pressing up, allowing Dandelion to find some friction there as he was pressed into the hand with every hard thrust.

“It’s the tights,” he said. Zoltan groaned, this time not from arousal.

“How are you still making puns with my cock in your ass?”

“Next time, I’m fucking your mouth, so you shut up.”

“Is that a promise?” Dandelion asked hopefully. Zoltan didn’t answer, he just tightened his grip on Dandelion’s cock and the bard came in his tights. Zoltan took just a couple more thrusts and he came as well. They both collapsed on the bed together.

“Ugh, need to get out of that mess,” Dandelion commented and tried to get up but Zoltan was lying on his back. “Could you move?”

With a growl Zoltan rolled off of Dandelion but didn’t get up.

Dandelion peeled his tights off and threw them into a corner of the room before taking a washcloth to clean himself. Then he went back to bed and pulled the blanket over both of them.