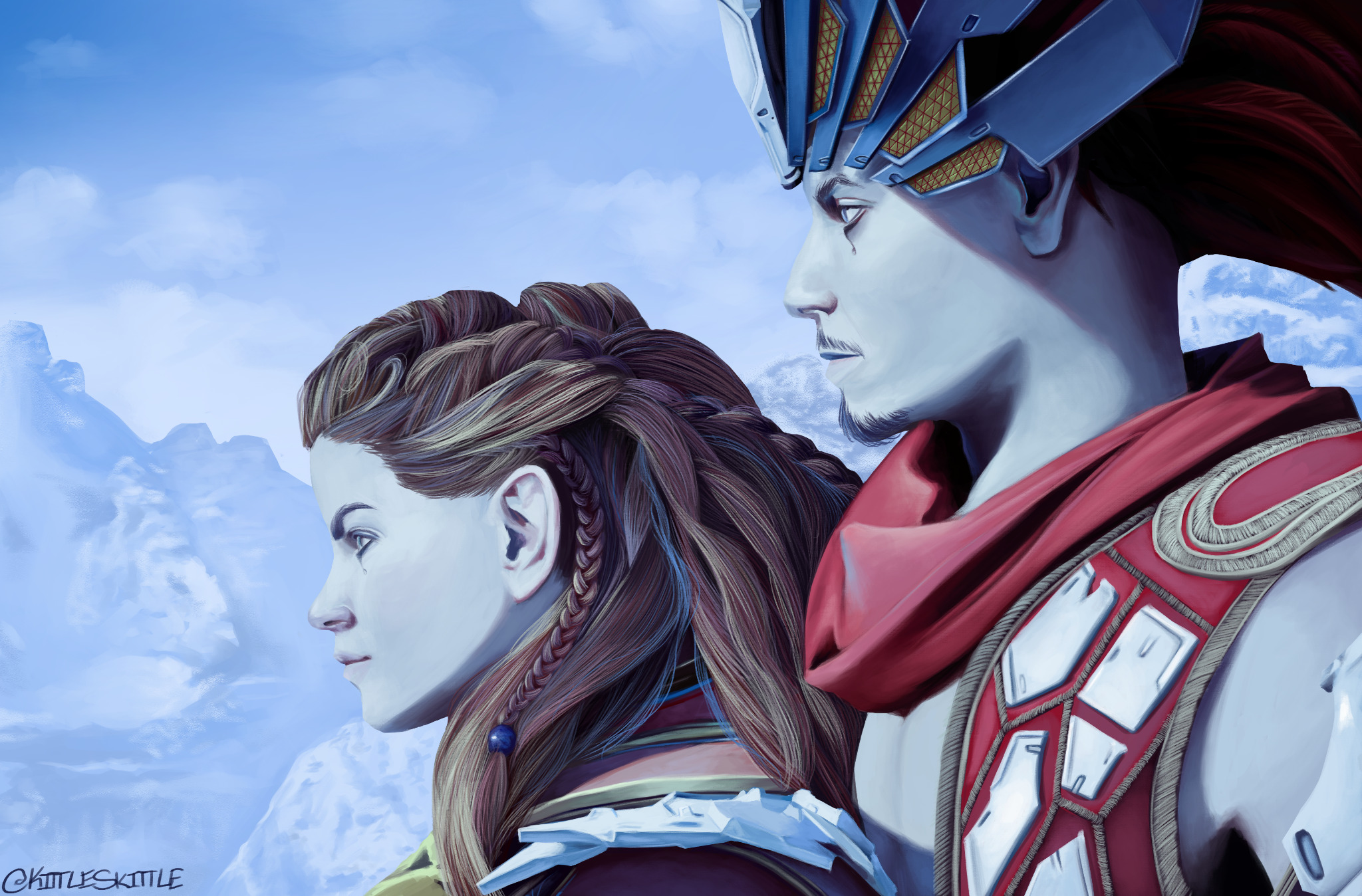 Holding her hand above her eyes to block out the glare of the sun, Aloy lifted her head and squinted.

She pursed her lips before finally saying, "It could be worse."

There was a soft chuckle beside her, and then the sensation of thick arms winding around her waist from behind. With a sigh, she leaned back.

"It could be, but it's still pretty bad."

"Yeah," Aloy admitted. "But it's not unsalvageable."

Her gaze wandered down the reddish brick of the place she had once called home, over the destroyed flower boxes and torn out framing of the windows. She wasn't certain if the damage had been courtesy of Jiran or what was coming to be called the Liberation, but she supposed it didn't matter either way.

It had been two weeks since the events of that day, and already they had faded into an almost dreamlike state for Aloy. Nil had explained to her that such a reaction was completely normal and likely her brain's attempt to take the edge out of the horrors she had witnessed. She supposed she ought to be grateful, especially with the work that had to be done.

All things considered, it was surprisingly little. Avad's insistence on only bombarding the outer walls of the city with the Oseram cannons had saved Meridian from deeper structural damage, and cleanup went quickly. The citizens who hadn't fled were generally eager to help with the cleanup, and most welcomed their new Sun-King readily, if with some wariness. The scars which Jiran had left behind in the psyche of the Carja people would take far more time to fix than brick and metal.

When it came to Avad's state of mind, however, Aloy wasn't as certain. He had been too busy aiding in relief efforts and setting up his new government for her to gain much insight into what he was feeling, but it didn't escape her notice that he was quieter now. There was a weight on his shoulders that had been building since his brother's death, and it bore down on him more heavily than ever.

Despite all of that, however, she knew he would ultimately be okay. He had a purpose to serve far greater than himself, and Aloy could already see the wheels in his head turning. It told her that change would come whether the Carja people wanted it or not. She knew that it wouldn't be easy, but she also knew that with Avad at the helm, she could trust that it would all be for the better.

Already Talanah had petitioned the Hunter's Lodge for membership, and with a couple of Hawks lost in the fray and the backing of the Sun-King himself, Sunhawk Ahsis had no choice but to admit her. The disgust on his face as he stormed out of the Lodge that day in conjunction with the pride on Talanah's as she emerged behind him had Aloy bursting with more pride for her friend than she had ever been before.

If Kadaman had still been alive to see her reach this first of her many goals, she knew he would have felt the same.

As for Erend and Ersa, neither showed any hesitation in their decision to make a home out of Meridian. The latter had been immediately promoted to the position of captain of Avad's new personal guard for her crucial role in the Liberation, with her brother serving under her and the Freebooters who had decided to stay filling out the rest of their ranks. The remaining advisors and nobility had already made moves to protest the promotion of Oseram to such high positions, but the Sun-King held firm in his decision.

Aloy and Nil had checked in on both Theradine and Radid around halfway through the first week, relieved to find that not only they, but their families had survived unscathed. The dressmaker in particular had been unusually serious and somber as he embraced the couple, whispering his worries and fears about their status through half-choked laughter.

Nil, always knowing the right thing to do and say, had broached the topic of their need for new hunting clothes, and Theradine had snapped to attention immediately, promising in his overenthusiastic way to deliver to them the finest hunter's outfits in all the world in a week's time.

Those who had defected to Avad's side before the Liberation had all received full pardons for whatever crimes they may have committed under Jiran, and that included Nil. The Sun-King had come to the decision that risking one's life for his cause was enough in the way of repentance, and those who had indeed died that day were also granted posthumous pardons.

The evening after Avad had made that decree, while they had been lying huddled together in an absurdly huge bed in one of the many rooms of the palace, Nil had confessed to her that he wasn't certain that he would escape punishment for his actions, and that even a death sentence wouldn't have been out of the question. For her part, Aloy knew that Avad would never have sentenced such a close friend to death, but she still held her husband just a little bit closer all the same, acutely aware of just how fortunate they had been.

Those who had surrendered in the aftermath weren't so lucky. Avad intended to launch an investigation into the prior actions of those who had been a part of his father's regime, and with Nil, Radid, and the pardoned soldiers already having given their testimonies, it likely wouldn't take long. What was interesting was the fact that he wished to attempt to set up a system of rehabilitation through imprisonment rather than the constant executions which had defined his father's reign. Aloy wasn't certain how this would pan out, but in her opinion—and surprisingly Nil's—it was worth a try.

That brought them to the present, finally returned to the house they hadn't dared come back to until now. So many memories, both good and bad, had defined Aloy's stay here. If she were honest, she wasn't quite sure how to feel anymore. It had been her home for the better part of a year, but when she asked herself if it still was, she had no answer.

As she looked the corner house over once more, her eyes dropped down to the cracked stone of the foundation, where a splash of color caught her eye.

Her husband followed her pointed finger with narrowed eyes, and they widened when they landed on what Aloy was gesturing at.

His arms fell from her, and they walked over to crouch down beside one another.

"Well, would you look at that," he said with a half-grin. "They made it after all."

Bright pink blooms stared up at Aloy from where they grew out of cracks in the masonry, so vibrant she almost felt as though they were smiling at her. Without hesitation, she smiled back.

"I guess you were right about them being hardy."

Nil studied them a moment longer. "You know, they almost look like they're thriving more here. Maybe the boxes were holding them back."

"They do seem happier," Aloy agreed. "I think we should leave them like this."

"I'm inclined to agree." With a sigh, Nil rose to his feet, brushing off the red and purple hunting clothes he wore. "And even if I didn't, they're your flowers."

"Our flowers," she corrected as she stood too. "And our home."

He seemed to sense a bit of how she was feeling, just as he always had. That comforting arm curled around her once again.

"It'll be here when we come back, huntress. Whenever that may be."

Aloy sucked in a breath, held it, and then let it go.

"For now, though, I think it's about time we head out," he said softly. "Anyone else you want to say goodbye to before we leave?"

Aloy shook her head. "No. I think we spoke to everyone. There's no point in delaying the inevitable."

With a final, lingering look, they grabbed their packs, slung them over their backs, and turned to head towards the great bridge out of the city.

Fearful whispers and glances still followed Nil wherever he went, but they were greatly lessened now. Word of his deeds during the night of Avad's flight and beyond had spread through word of mouth as virulently as his bloody exploits as a kestrel had, and most people seemed to accept that he was no longer a threat, although they were still wary. Aloy couldn't blame them, but she knew it wouldn't matter much soon anyway. With where they were going, people weren't exactly in abundance.

Their feet carried faithfully them through the city gates, over the bridge, and into the deserts beyond Meridian. Perhaps Aloy ought to feel some deep sensation of loss, or at the very least a little sad.

But as she slid her hand into her husband's and they turned their direction to the east, all she knew was a buoyant lightness. It bubbled in her chest, spreading outward into her limbs and up into her head until she couldn't help but break out into a massive grin. And when Nil looked her way, he reflected that joy right back at her.

He had been right, of course. Their home would still be there when they came back, whenever that might be, and so too would their friends. In the meantime, they had each other and boundless freedom of the untamed wilds.

After a lifetime of nothing, to Aloy, having someone to share her life with was everything. And so, with the sun and Meridian at their backs, she and Nil moved forward and into the world.

Holy shit, we are DONE. First of all, hope you enjoyed the art which I specifically painted for this epilogue.

Second of all, I wanted to extend a huge thank you to everyone who commented, bookmarked, and dropped kudos on this fic. The great reception was a massive motivator to me, especially because I've never written anything this long in my LIFE. At 70k words Peregrinations was the previous record holder for that, but as you can see, I more than doubled even that. I'm so goddamn proud of myself, and yinz really helped me get there!

As far as future plans for writing these two go, I'm not too certain. I've still been writing, but it's a lot of modern AU stuff (there's specifically a storm chaser AU I've been outlining called High Risk...). I'm not particularly keen on posting that, because the reception to modern AUs in this fandom has been less than stellar, so it's mostly been shared among friends. However, I maaay just decide to post anyway. We'll see.

Otherwise, I've had vague ideas for a post game short story where Aloy learns that she can't keep using people to obtain her goals and then cast them aside the second she's done with them. You know, my usual themes. Only time will tell whether or not that comes to fruition. In the meantime, be sure to check out my other fics and oneshots, because I work just as hard on those!

Anyway, thank you so much for coming along with me on this journey! I truly hope you've enjoyed it as much as I have, and I'll see yinz around!