Inuyasha picked up the oblong weird stick thing that smelled of Kagome, taking a deep sniff...

This is what happened directly after our brave hanyō got sat. 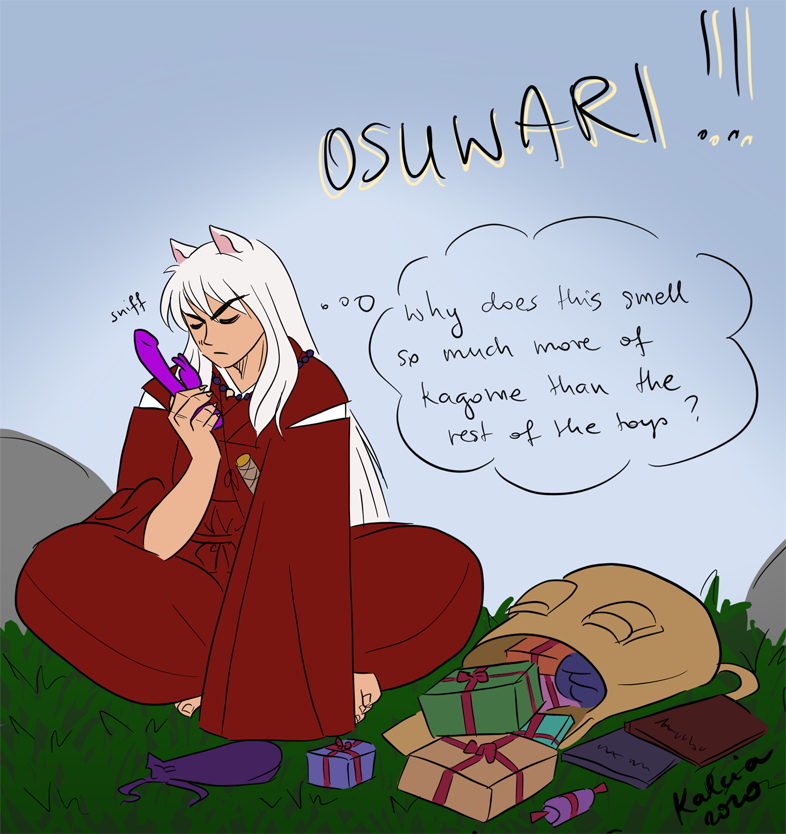 “What the fuck Kagome?!?” Inuyasha had had it with Kagome sitting him for no reason!

“Um… you were… spoiling the surprise.” Kagome’s face was beet red, which seemed like quite the over-reaction. He pilfered the damn backpack all the time. Why was it different?

Maybe it was that weird thing from Kagome’s world that smelled… like her.

And as they trudged toward wherever-the-fuck they were going, he kept thinking about that weird thing.

Why did he want to sniff it some more?
Because that was all he was thinking about.
Sniffing the strange oblong object. Because of what it smelled like.

Finally the fucking sun was setting and they had to stop. Inuyasha sniffed the air, pinpointing the scent he’d been leading them toward: a hot spring. It was perfect, actually. Because it meant that Kagome, Shippo and Sango would go soak, the bouzu would try to follow them and get a good thumping from Sango, and Inuyasha could be… left to his own devices.

“Uh… we’re close to a hot spring. I figured… it would be a good break. We got a long day ahead of us tomorrow,” Inuyasha explained, pointing toward the northwest.

“Inuyasha, that’s great! Thank you!” Kagome bounded over to him, and gently rubbed his arm. He fucking loved when she rubbed his arm like that.

“Keh,” was all he said in reply.
Someday maybe he’d get up the nerve to… express more. But, not today.

Once Kagome and Sango were well on their way to the spring, Shippo in tow, and Miroku also following shortly thereafter, Inuyasha set to work.

Kagome had left her bag down at camp, and Inuyasha was going to find the weird stick again. Because he needed to figure out why it made his eyes dilate. Why it made his yoki stir. What it made his groin… well… his groin certainly seemed to react to that scent too.

Keeping one ear open for any sign of danger (or intruders), Inuyasha dug through the bag. At the very bottom, he found the stick again. The one that made Kagome sit him.

And he could smell it again: something citrusy and playful, but also something earthy. Something he wanted to stick his nose in and snuffle endlessly.

He looked around one more time, then slowly, tentatively, Inuyasha stuck out his tongue. She’d never know, after all, and all he needed was a single taste. That would sate him, surely. And so he licked the little stick that smelled like Kagome, and… then he licked it again, and he licked it again.

It wasn’t like food, it was… more. Deeper. More instinctual. And with every little lick, he wanted to lick it more. Like it was a flavor made only for him. And one he would never get enough of. He needed it.

That was probably why he hadn’t heard Kagome return, until after he heard her shout his name.

But this time, he didn’t care. He’d tasted the ambrosia of the gods, and he knew his new life’s quest was going to be getting more of it, hopefully from its source.