Walter Marshall is off work early to find burnt latkes in his kitchen. Can he help save Hanukkah for you?

I wanted to get this done for the first day of Hanukkah, but my depression reared it’s ugly head. I decided to start off this challenge by writing for my favorite bear. I’m feeling a bit homesick due to the fact I’m normally back home with my family at this time of year. So this piece reflects a bit of that.

A delicate blanket made of snowflakes had nestled itself over the streets of Minneapolis. Normally by the time Walter was evicted from his office at the station, this picturesque scene would have been turned into mucky slush. However, with the impending snowstorm on top of the current stay at home order, the snowy streets remained relatively undisturbed. Walking towards his car, he took in the sight before him; it was different to be caught up in it rather than watching this winter wonderland from his office window.

The tired detective let out a groan as he clamored into his freezing car. The sun was just beginning to set and bright oranges and reds danced across the wintery whiter stage that was this city. He quickly turned on the ignition and peeled out of his parking spot, eager to be out of the cold and in the arms of his girl. The ride home was rather uneventful due to the denizens of this icy city finally listening to restrictions set in place. At least, that’s what he had hoped. The amount of times Walter had been called to break up a party in the past few months would have astounded him had he not been dealing with humanity’s worst of the worst in homicide.

In addition, Faye had been participating in remote learning, which allowed her to blow up his phone throughout the day. It was bad enough that he had be relegated from homicide to deal with those covidiots, but having a stir-crazy teenager attached to her phone when she should be paying attention to her classes was surely wearing him down. He went from having a phone that could stay charged for a few days straight to having to charge it nightly due to his daughter’s antics. In hindsight, it was better than her spending her ample free time messaging strangers online. All he wanted now was a quiet night at home with his girlfriend; perhaps, cuddled up on the couch with some wine and watching whatever silly holiday movie piqued their interest.

The first thing he noticed as he pulled into the driveway was that your car was parked out front, yet the lights were off in the house. It was still rather light out so it wouldn’t have been the biggest deal in the world if Walter wasn’t a cop. Nevertheless, it caused the hairs on the back of his neck to stand up as he exited the vehicle. The curly haired man quickly removed his gun from his holster and began to walk towards the front door. With a swift turn of the door knob, he could tell that you had once again left the door unlocked. This was a continued point of contention in the relationship as the horrors of that dreadful day a few years back were ever present in his mind.

Granted, the two of you had not even met yet and most of the details of that brutal case were never to be disclosed to the public. Walter carefully opened the door and stepped into the house. He heard the crackle of the fire in the next room and quickly ascertained that his worst fears hadn’t come true. Sliding his gun back into the holster, Walter quietly toed off his boots and hung his jacket up in the closet. Then he took off his mask and set it on the table by the door. His sock covered feet padded against the hard wooden floor of the entryway as he made his way towards the living room. The electric fire was the only source of light in the room and he could scarcely make your sleeping form out on the couch.

It wasn’t like you to be asleep this early, but ever since the world shut down, things have been rather different around here. Walter silently leant down to give you a kiss on the cheek and to check to make sure you weren’t suffering from a fever. Grabbing his phone from his back pocket, he made his way over to the kitchen to get started on dinner. Just as he was about to go through the sea of texts from Faye, the detective noticed a faint smell of burnt food. He set his phone on the counter and quickly flicked on the lights.

Walter immediately saw the culprit of the smell sitting on the stove. The pan that was there had something black seared to its insides, yet it was too charred for him to tell further. Whatever you had made had clearly gone awry and you had quickly cleaned up almost all traces of your failed attempt. You were a good cook and always roped him into whatever cooking show was on tv; even Faye would join the two of you whenever she would stay over. You had spent your down time during the quarantine trying out new recipes; some were good enough to be added to the meal rotation, while others had failed to win approval across the board.

It was no bother to him to take your place as the cook tonight if it meant you had one less thing weighing you down. This time of year was hard on most people and adding in a pandemic only made things more difficult. Tossing the pan into the sink for a well deserved deep cleaning at a later time, Walter noticed his phone light up on the counter. Another text from Faye joined the countless others and now was as good a time as any to go through them. 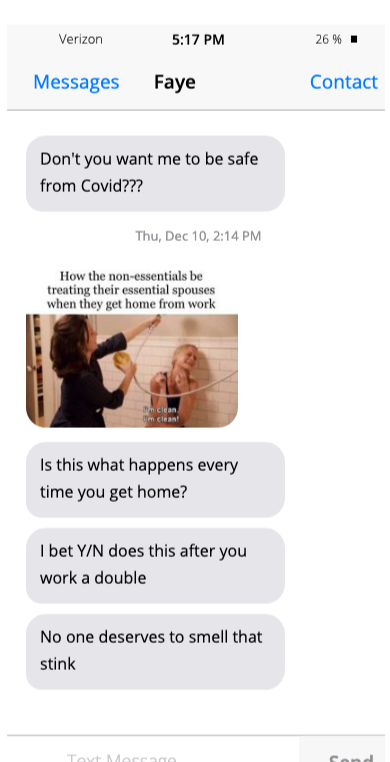 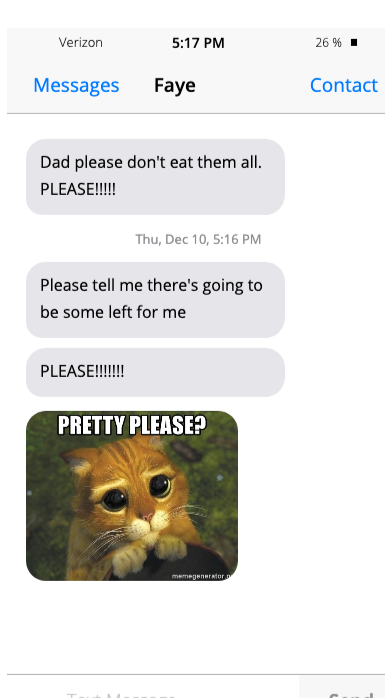 Walter had to thank whoever blessed him with his daughter and her daily text spams. The mystery of the burned food had been solved without having to wake you. Clearly, you had a bit of trouble with the latkes, but luckily for you now he was home to assist in anyway you needed. Hanukkah dinner could be a team effort. The curly haired man made quick work of getting the pan you had been using clean before he made his way over to the couch you were on. Getting down on bended knee in front of your sleeping form, he gently placed a hand on you to wake you up.

“Sweetheart…would you consider rejoining the land of the living?” He whispered.

“Too cozy,” you grumbled as you pulled an arm up to cover your eyes.

“I bet you are, but you won’t be if I take this blanket,” Walter chuckled.

That got you to sit up and stare blearily at him. “You wouldn’t dare let me freeze” you replied to which he raised an eyebrow at you as if to say try me.

You sighed heavily and pulled the blanket off you before folding and returning it to its spot over the back of the couch. Your bear of a man sat down beside you and gently pat his thigh, the universal signal for you to come cuddle up on his lap. You eagerly shot up and made yourself cozy on his lap, burying your face in his neck and breathing him in. His hand came up to slowly stroke your back as the two of you cuddled in silence.

“What’s on your mind, love?” He questioned as he kissed the top of your head.

You tried to hold back the tears that were eager to pour out, “I miss my family, Walt. I’m so used to spending at least some of the holidays with them. Then my cousins decided to have a latke cook-off since we can’t get together and I burned them. I have no idea how I did it. It was awful and it made me wish that my gram was here to help me fix it. B-b-but she’s back home and I’m here and I don’t know when I’ll get to cook with her again.” The last part came out in as sob.

“Shhhhh honey. Shhhh. It’s ok,” Walter murmured into your hair and he hugged you tightly as you cried into his neck.

It took a few minutes for all your sadness and frustration to be sobbed out. The detective remained the strong beacon of light that his girl needed to get through this storm of emotions. He whispered his love and praises into your hair, never letting go of you even for a second. You needed to get everything out that you been bundling up in inside. When the last remaining tears had fallen and your sniffles had abated, you slowly lifted your head to look at him.

“Well I think together we can try and kick those cousins of yours’ arses, sweetheart. What do you say?”

“Good. Up we get,” Walter said, giving a small swat to your butt.

You quickly clamored off of his lap and hurried into the kitchen to get out the supplies. Walter followed after you and waited for further instructions. The two of started cleaning and shredding the potatoes. You even turned it into a game to see who shred the most potatoes the fastest and it turned out a tie. Soon you added the rest of the ingredients to the bowl while he heated the pan. Walter and you worked together as a perfect team; joking around and laughing as you fried the latkes.

Walter set the table as you continued to cook up you Hanukkah meal. He grabbed the applesauce and ketchup since that what you recommended to accompany them. When you had finally finished cooking the last few and added them to the growing pile, you took the precious cargo over to your eager boyfriend. Each latke turned out a perfect golden brown that was hard on the outside and softer in the center. With the first bite, the two of you moaned at the salty, oily goodness.

“Now you see why we only make them once a year,” You hummed in between bites.

“I do indeed. Faye asked you to save her some.”

“Well we did make enough to feed an army. The only issue is you big guy,” You teased,” But yes I can save her some.”

You finished the latke you were on and padded over to the kitchen to grab a container before returning. You carefully placed the latkes inside and headed back to the kitchen to stick them in the freezer for the next time Faye was over. The two of you contentedly ate as many latkes as your stomachs could handle. With your stomachs and hearts full, the table was cleared and you both returned to curl up by the fire.

“Hey Walter,” You started, smiling up at him.

Alex1743, hauntedelation, and Sweetbriarrose as well as 1 guest left kudos on this work!