Never Bet Your Clothes in a Game of Sevivon

A package is left outside your dorm room and Mike steps in to guard it. What a mensch!

Yes I know Hanukkah is over but I wanted to finish the prompt list I made. This is my first time writing for Mike. I never had much interest in him until I started talking to @october505 on tumblr so this one is for you love!

The sun had already been chased from the sky by the time you had made your way back to the dorms. Snowy footprints littered the campus grounds from when students had raced through the cold to their classes. You preferred the silence that came with this frozen tundra. It gave you the much needed time to reflect over the day’s events as the icy breeze nipped at your exposed skin. It was hard to believe that the semester was almost over. Next week you would be busy taking your finals before flying back home for the winter break.

As you continue to trudge to the dorms, you watched as the next flurry of snowflakes began to fall. Some fell on your coat while others joined their brothers and sisters underneath your boots. The following current of air even made the snowflakes dance across the frosty ground before they were allowed to settle. When the wind started to bite at your heels, you were spurred on to pick up your pace. Finally, the distant lights of the dormitories came into your view. You could almost feel the warmth of their glow on your cold cheeks.

You broke off into a light jog, eager to have your warm bed chase away the chill that had settled in your bones. You hurried up the shoveled path and slipped your hand out from the warmth of your coat pocket. Your fingers gripped tightly around the front door key as you unlocked the door and slid into the sauna-like hallway. You walked over to the front staircase and quickly hopped up the steps two at a time. It was finally the weekend for you and you wanted nothing more than to take a load off. You deserved a night off before the stressful week that was ahead.

Reaching the third floor where your room was located, you carefully pulled the heavy door open before stepping out of the stairwell. You swiftly moved down the hallway, tossing your keys back and forth between your hands. It was abnormally quiet tonight in the halls; perhaps your peers had already headed out to the bar early. You shook your head as you made a left at the end of the hall. How ironic it was that the one night you wanted to party, everyone had disappeared.

Well not everyone it seemed as you noticed a figure waiting towards the middle of the hall. You continued your descent down the hall and as you got closer, you noticed it was none other than Mike. You were a bit confused as to why he waiting by your door until you glanced at his feet. Next to him was a package wrapped in brown paper. You quickly hurried to relieve him of standing guard by your door.

“Hey yourself,” Mike teased with a waggle of his eyebrows.

“Dork,” you scoffed and rolled your eyes at him.

“Hey! I prefer the term knight in shining armor but I suppose in this case you’ll have to settle for knight in comfy joggers.”

“To which I must remind you that you didn’t need to be. No one is going to be eager to steal my mail when everyone is out partying,” You retorted as you bent down to grab the box. You carefully balanced it on one hip as you unlocked your door with the other hand.

Mike leaned up against your doorframe as you puttered around the room. “Maybe I was hoping it was a spliff stash that you’d be willing to share with me so I can survive final exams.”

“I think it’s just a care package from my bubbe,” You sighed setting your package down on the bed.

“Bubbe? Is that some new slang for some boyfriend back home that I don’t know about?” The curly haired boy questioned.

“It’s Yiddish for grandma, you perv.”

You sat down at your desk and yanked your boots off your feet. You wiggle your sock-covered toes as the warmth of the building sinks in. You shuck off your coat and pad over to your cozy bed. You flop down next to the awaiting package.

“Good sir, I believe you have done your duty with the utmost care. I bid you adieu,” You declared.

“Wait a second. Can’t I see the bounty I was protecting?”

“It’s not a spliff stash but sure knock yourself out,” You chuckled as you scoot over to allow Mike to sit beside on the bed too.

The curly haired boy crossed the room and joined you on the bed. You got up to grab a pair of scissors from your desk before returning to your previous seat. Carefully you cut away the brown paper encompassing it before you cut away the tape sealing the box shut. You peel back the sides of the box to reveal the goodies your grandma sent. You received a container of Hanukkah cookies which were surprisingly still whole, a pair of socks with latkes on them, gelt, two dreidels, a sweater that said Come on Baby Light My Menorah, and a card from your bubbe and zaydee. You could feel the heat of embarrassment spread itself across your cheeks. 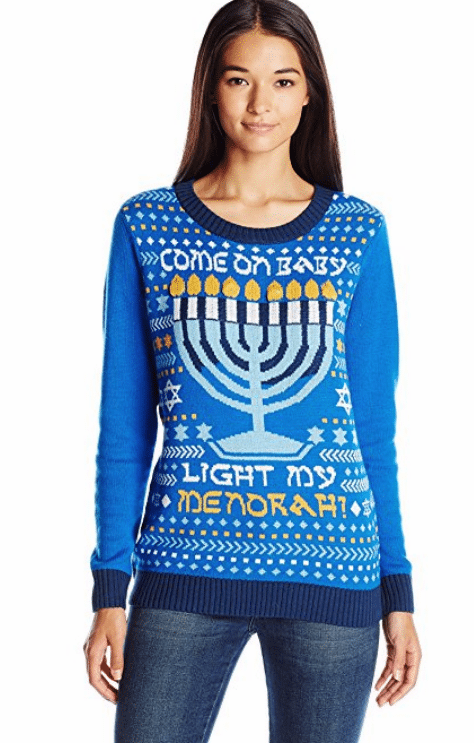 “What’s all this darling?” Mike asked.

“Just some Hanukkah stuff. I guess my bubbe felt the need to bring the family dinner to me,” You replied a bit bashfully,” The little tops are called dreidels or sevivon. You bet these gold coins or whatever else you want each round. It’s really a kids game, but it doesn’t stop the adults from joining in.”

“You bet whatever you said,” Mike joshed with a devilish smirk on his face.

“I think my zaydee used to play for actual money when he was growing up. Zaydee means grandpa,” You quickly added at the end.

“We could make it like strip monopoly. Instead of the chocolate you can bet your clothes,” the boy suggested.

“You really want to get me naked don’t you?”

“And you don’t want to see all this?” Mike teased, gesturing to himself,” Or maybe you’re just chicken?”

You could feel your face heat up again. “I’m not chicken. Just cautious,” You paused while you thought things over,” We can play strip dreidel but if I win all your clothes, you have to let me borrow your printer for the entirety of next semester.”

“Then if I win, I want to take you out on a date. A real one with dinner and everything.”

“Deal!” You chirped, eager to not let Mike take back what he offered.

You grabbed the dreidels and a pillow before making yourself comfy on the floor. He followed suit after you leaning up slightly against your desk chair.

“So the rules of the game are rather simple. At the beginning of each round, we’ll put a piece of gelt into the pot. Anytime the pot is empty or there’s only one piece, we have to add another. Each side of the dreidel has a different outcome. This is נ (nun). If you get this, you don’t get any of the pot or add any in. Next is ג (Gimmel). If you land on it, you take the whole pot. Followed by ה (hey) which means you get half of the pot. If there’s an odd number of pieces, you leave the odd piece in the pot. Finally, this is ש (shin) it means you have to add another piece to the pot,“ You explained before handing him a dreidel.

“Since we’ll be betting our clothes, once an item comes off it stays off,” Mike offered.

“Good. It’s settled then. After you my lady,” he uttered before taking off his shirt.

You gulped before shucking yours off to join his in the pile. You grabbed the other dreidel and gave it a spin. It landed on נ and you were thankful for that. The rest of the game passed in relative silence with the both of you eager to win. By the time you were down to your underwear, the game was tied. Each of you had an equal amount of clothing. You grabbed the dreidel to give it another spin and it soon fell on ש. You felt the blood rush from your face as you had to decide between loosing your bra or your panties.

As if Mike could sense your apprehension, he swiftly added,” We can stop if you want to. Maybe call it a tie, cuddle up under some blankets, and eat some of those cookies your grandma sent.”

Your wide eyes stared up at him, desperately trying to find your words. Sighing you nodded before standing up and offering him a hand. The boy gently pulled himself to his feet and handed you his shirt.

“Thanks Mike,” You murmured as you slipped it on.

You moved over to the bed and carefully removed everything but the box of cookies. You peeled back your blankets before sliding into your warm bed. Mike waited until you were settled before he came to lay beside you. He moved his arm so you could cuddle up next to him. You rested you head right above his heart and listened to the steady lub-dub it made. The two of you lay in comfortable silence, basking in each other’s warmth.

“I was serious about that date though. I want to take you out before the next semester,” Mike murmured into your hair.

Sweetbriarrose and hauntedelation as well as 1 guest left kudos on this work!